The IRS tax code provides an exclusion for municipal bonds, allowing most U.S. investors to collect interest payments from them tax-free; and in many states, income from those bonds is exempt from state taxes as well, notes closed-end fund (CEF) expert Michael Foster, editor of CEF Insider and contributor to MoneyShow.com.

Having an income stream the IRS can’t touch may sound like pie in the sky, but it’s a reality if you hold municipal bonds. If you aren’t intrigued yet, then let me show you some numbers, and what they could mean to your portfolio. If you’re in the highest tax bracket (37%) and you get a 6%-yielding municipal bond fund, that income is the exact same as a 9.5% dividend from stocks. And municipal bonds are nowhere near as volatile as high-yield stocks. Just compare the volatility of the iShares National Muni Bond ETF(MUB) and the  Vanguard High Dividend Yield ETF (VYM): 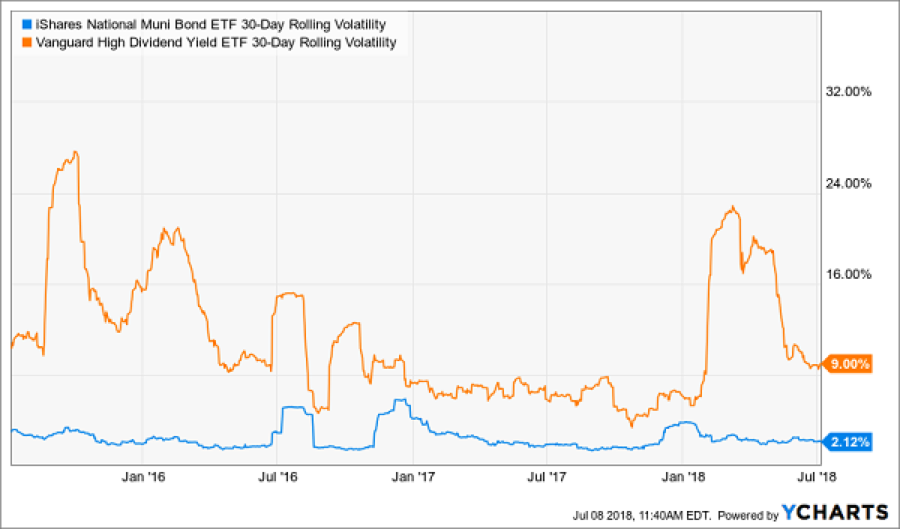 Not only does this lower volatility give you peace of mind, but it also makes withdrawing from your principal easier in cases of emergency. There’s just one problem — iShares National Muni Bond ETF yields a paltry 2.4%. But have no fear; I’m going to show you three CEFs that yield far more than that and are still tax-free. Before I get to them, though, let me tell you why now is the time to jump in.

One of the biggest benefits of closed-end funds is how inefficient they are. It sounds crazy, but closed-end funds cater to retail investors, who often just don’t know how far apart these funds’ market prices are from their net asset values (NAVs), resulting in big discounts for a lot of CEFs. In fact, the average CEF now trades at a 6.3% discount to its NAV, which is near the biggest average discount over the last year.

But some CEFs are more heavily discounted than others, while some actually trade at a premium — or for more than what their portfolios are worth. That risk of overpaying is why you can’t just choose any CEF. The most interesting trend in closed-end funds over the last few months has been the shrinking discount to NAV among equity funds and the growing discount among bond funds — but nowhere is the discount bigger than among municipal-bond funds. Take a look:

With the average discount among muni bond closed-end funds at 8.6% (which is near double the 5.3% average discount of just a year ago, by the way), these funds offer us an incredible buying opportunity right now. Which is why muni bond funds are the it thing to buy right now. For one, with their unusually large discounts, muni funds are finding it easier to sustain their dividend payments, providing us with a safer income stream. Also, despite popular belief, municipal bonds do not go down during periods of rising interest rates.

In fact, this “rates up, muni bonds down” myth is a big driver of why muni bond CEFs are so cheap now, again giving contrarians like us an opportunity to get tax-free income at a heavy discount. Don’t believe me? Take a look at this chart from the mid-2000s when the Federal Reserve increased interest rates by over 400%: 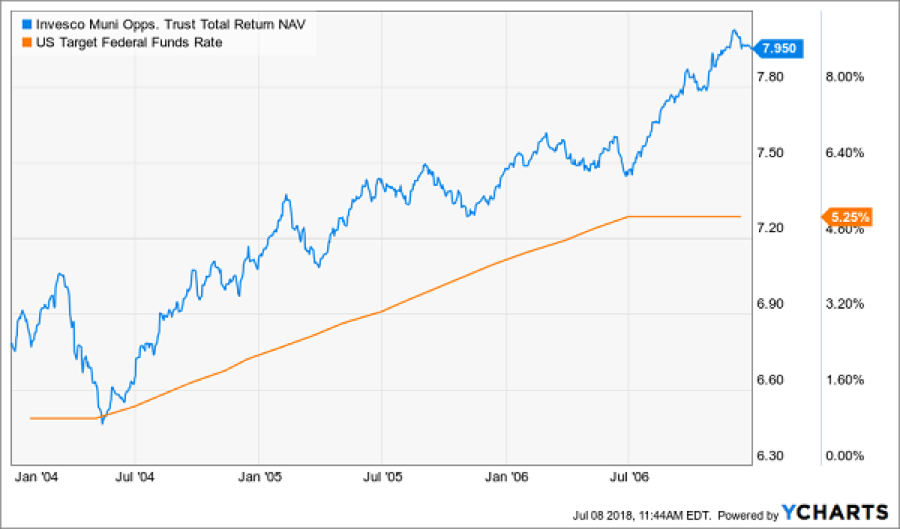 That blue line is the Invesco Municipal Opportunity Trust (VMO), the first pick I want to share. It’s a 5.7% yielder full of tax-free muni bonds that went up a full 17% during the last sustained rate-hike cycle. And it’s unusually cheap now: its 10.8% discount to NAV is massive on its own, but it’s even more attractive when you consider that the fund’s discount has averaged just 2.3% in the last decade.

On top of that, the fund is managed by Invesco Ltd. (IVZ), which is one of the world’s biggest fund companies, with over $950 billion in assets under management (AUM). So you can count on this fund being reliable and secure. Additionally, Invesco Municipal Opportunity Trust has a long history. It’s been around since the early 1990s and has delivered consistently strong results since then — surviving the dot-com bubble bursting, the subprime mortgage crisis and all the drama in between. 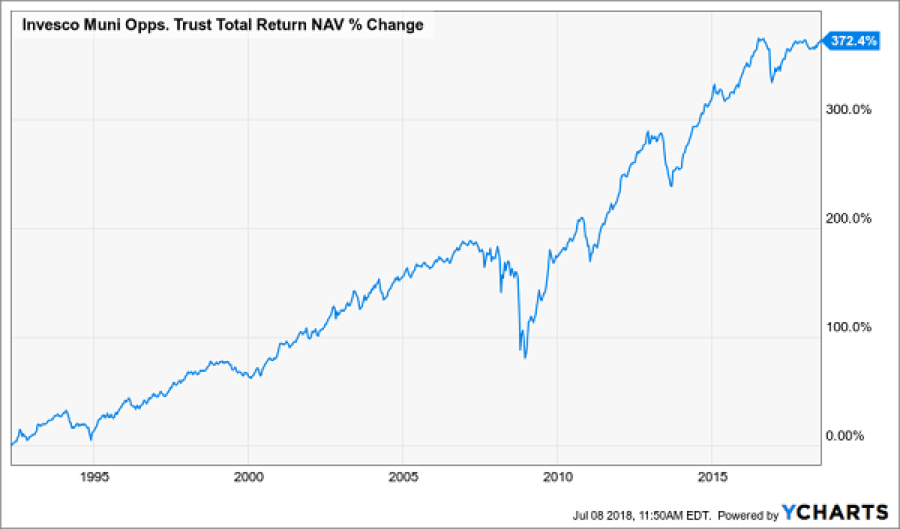 Which brings me to my second big yielder worth considering: the PIMCO NY Municipal Income III Fund (PYN), a 5.9% payer managed by one of the most respected names in the bond world: PIMCO, with $1.8 trillion in assets under management, which is more than the GDP of several small countries. PIMCO built those assets through outperformance, which is why most of the company’s closed-end funds tend to trade at premiums to NAV.

PIMCO NY Municipal Income III Fund, however, is different. With a 2.6% discount to NAV, this fund is trading for less than the value of the assets in its portfolio — something it hasn’t done since 2009. And there’s no reason for it to trade so cheap, since the closed-end fund has doubled the return of its benchmark, the iShares National Muni Bond ETF, since the Federal Reserve started raising interest rates in late 2015: 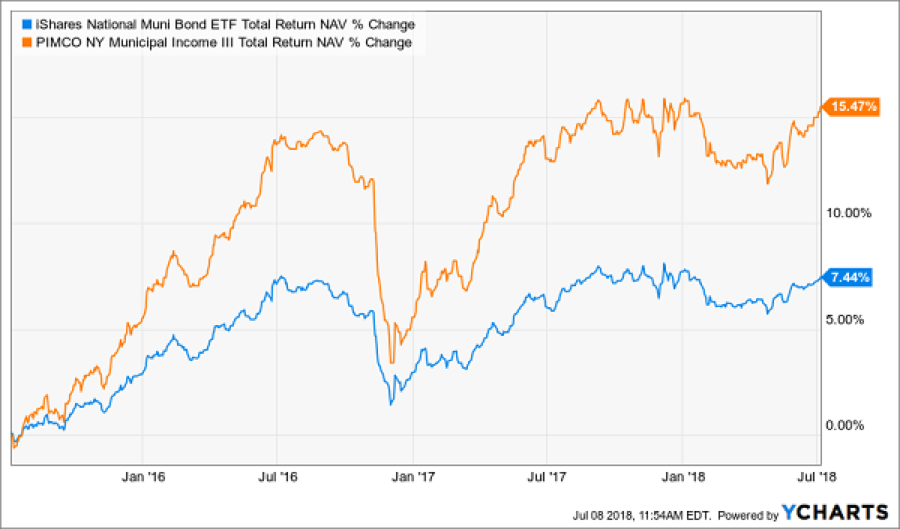 With such a track record, expect this one to trade at a premium to NAV soon. But there’s one other thing that makes PIMCO NY Municipal Income III Fund attractive: its size, or lack thereof. Because the fund has just $51 million in assets under management, it’s simply too small for a lot of large institutional investors, and that small size means that it’s incredibly inefficient, even by closed-end fund standards. That’s why this fund typically has traded for a premium to NAV for most of the last decade, making its recent discount that much more appealing. 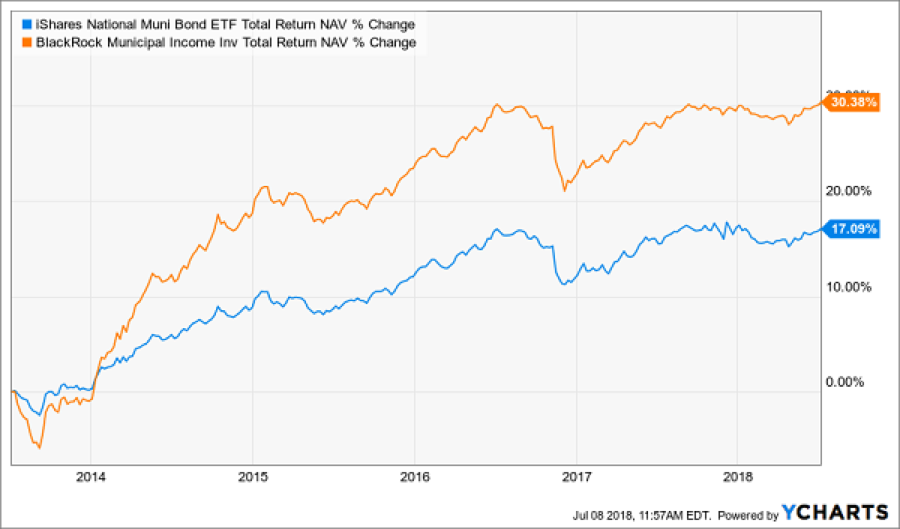 That means it has the connections to get the best municipal bonds as soon as they go IPO, the best minds and technology to analyze those municipal bonds and the best market position to trade those bonds most profitably. Is this corporate heft priced in to BlackRock Municipal Income Investment Trust? Hardly. It’s trading at a massive 7.4% discount to NAV, after trading at a premium for most of the last three years: 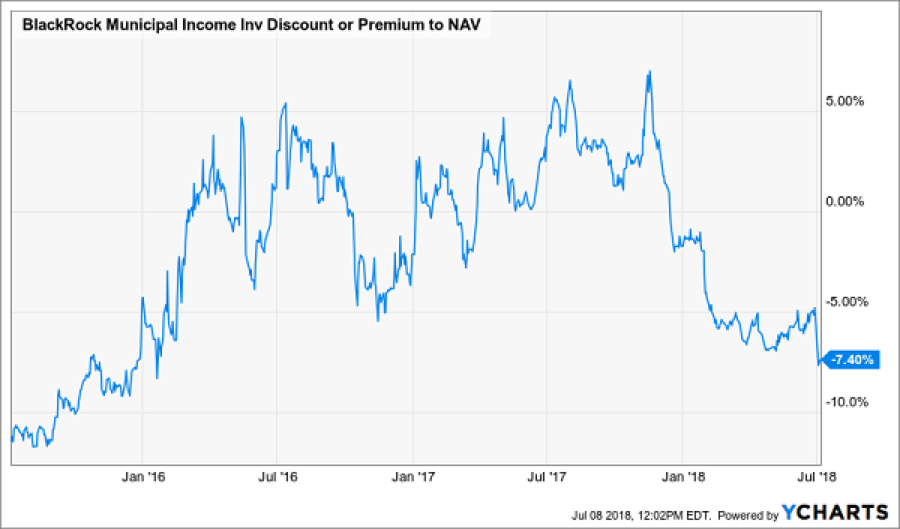 Should we expect this premium to NAV to come back? The short answer is yes. The discount only showed up — and steepened — in the last few months due to the market panic of the last few months. But the market is getting more comfortable, which will likely result in BlackRock Municipal Income Investment Trust returning to its normal high price, giving those of us who buy today some tidy capital gains on top of that massive 6.1% income stream.