Home » Business » 8 of the 10 cities with the most surveillance cameras in the world are in China, and the other 2 are in the UK and the US

Chinese cities are the most monitored in the world and – if surveillance cameras are installed at planned rates – can be expected to have one public camera for every two people by 2020, according to a British pro-consumer website.

In a ranking based on the number of CCTV cameras per 1,000 people, China has eight of the top 10 most surveilled cities in the world. The only two non-Chinese cities in the top 10 were London in sixth place and Atlanta in the US at No 10.

The report by the website Comparitech, which provides information for research and comparison of tech services, put Chongqing in the southwestern province of Sichuan in first place with nearly 2.6 million cameras – or 168.03 per 1,000 people. Shenzhen, in the southern province of Guangdong, came a close second with 159.09 cameras per 1,000 people.

Urumqi, capital of China’s Xinjiang Uygur autonomous region – where there have been reports of the Chinese government keeping a close watch on its Muslim population – ranked 14th, with 12.4 cameras per 1,000 people. 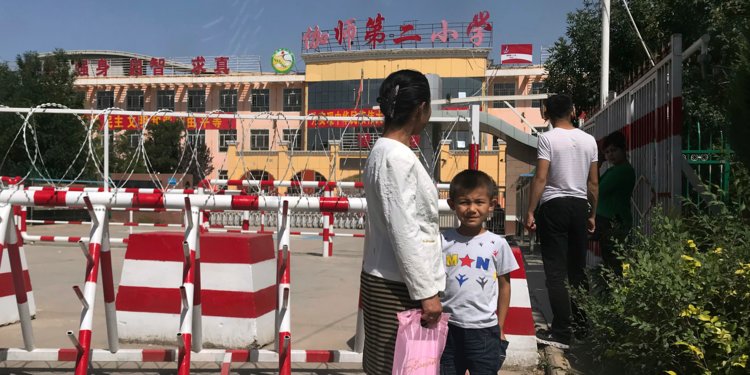 A woman and child wait outside a school entrance mounted with surveillance cameras and barricades with barbed wire inPeyzawat, Xinjiang, in August 2018.Ng Han Guan/AP

It has been widely reported that China today has about 200 million CCTV cameras in use, a figure predicted to rise 213 per cent by 2022 to 626 million. However, the Comparitech report suggests the number could be far higher.

“The city of Shenzhen plans to have 16,680,000 cameras installed in the coming years, a 1,145 per cent increase over today’s figure of approximately 1,929,600 cameras. If the whole of China increased the number of CCTV cameras by 1,145 per cent, that would mean a total of 2.29 billion cameras – just less than two cameras per person,” the Comparitech report said.

Read more: How a Chinese region that accounts for just 1.5% of the population became one of the most intrusive police states in the world

The report found a weak correlation between the number of cameras and how safe they made people feel, based on a comparison with figures of crime and safety collated by Numbeo, a collaborative database of user-contributed data from cities around the world.

A worker adjusts security cameras on the edge of Tiananmen Square in Beijing on September 30, 2014.GREG BAKER/AFP/Getty Images

Sarah Wang, from Chongqing, said she had “mixed feelings” about seeing her city atop the list, but security cameras had benefits as well. “Even it makes me feel a bit disgusted, that feeling still can’t overcome my strong wish to find out who stole my phone in public,” she said.

Shenzhen resident Yang Guo said the visible benefits CCTV had brought to his city – which ranked in second place – included civil behaviour from drivers who risked fines if any traffic infringements were caught on camera. Yang said he felt safe using pedestrian crossings and was no longer afraid of being hit by cars in the city.

“I’m fine with surveillance cameras as long as they are in public places,” he said.

China has been criticised for its mass surveillance system, coupled with its enthusiastic adoption of facial recognition technology, which has been used to identify fugitives in huge crowds attending concerts and to detain them, for example.

Opponents say the system increases the amount of data collected and shared about citizens, public officials and companies, and there is also a concern about its role in developing China’s social credit system, which seeks to regulate individual and corporate behaviour through blacklists or scoring systems