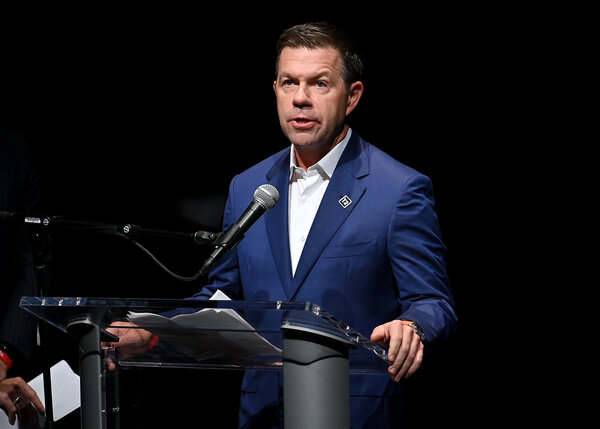 A fraying web of influence

Declan Kelly, the chief executive of Teneo, an influential corporate advisory firm, abruptly quit yesterday. The announcement by Teneo’s board came a week after the firm said he would temporarily reduce his duties for the next few months, following news of his drunken misconduct at a charity event last month. DealBook’s Lauren Hirsch has been tracking the story for The Times.

Kelly was the right-hand man of many a C.E.O. He helped build Teneo with captivating salesmanship and the access afforded by a star-studded Rolodex shared by him and the onetime Clinton family confidant Doug Band, with whom he founded the firm. Kelly amassed a following of loyal powerful executives, including Dow Chemical’s Andrew Liveris, Coca-Cola’s Muhtar Kent and IBM’s Ginni Rometty. Teneo also got Washington power players to join its roster of advisers, like the former House Speaker Paul Ryan and the former Senate majority leader George Mitchell.

The firm, which covers the likes of M&A advisory, management consulting and crisis communications, has more than 1,200 employees. It has expanded by investing in firms like WestExec Advisors, founded by Tony Blinken, who is now secretary of state.

Teneo initially kept Kelly’s misconduct under wraps. Shortly after the May 2 event, where Kelly was “inebriated and behaved inappropriately toward some women and men,” according to a statement from his representative, Kelly told the firm’s senior leadership that he would cut back his duties to deal with an unspecified health issue. Most Teneo employees, and the firm’s clients, found out about the incident last week from an article in The Financial Times. The firm then began reaching out to clients, and Kelly asked for a staff meeting to discuss the article — although the call irked some attendees, focusing more on Kelly’s health than reports of his inappropriate touching of women.

A senior managing director quit on Friday as a result of the event and the firm’s handling of it. At least one client, General Motors, has severed ties with Kelly, and many others are seeking answers about what exactly happened at the event.

Without Kelly, what is Teneo worth? Kelly’s last firm, Financial Dynamics, sold to FTI Consulting for $260 million in 2006, then one of the splashiest deals of its kind. He founded Teneo in 2011, with the same build-to-sell mentality. B.C. Partners invested in the company in 2014, and five years later, CVC bought a majority stake for more than $700 million. The test now for Teneo, and its investors, will be to retain accounts and employees — DealBook hears that competitors are eagerly circling — by dealing with its own crisis as effectively as it pledges to do for clients.

China’s ride-hailing giant is valued at $67 billion in its I.P.O. Didi Chuxing priced its shares at $14 each, raising more than $4 billion. The company’s stock will begin trading in New York today, testing investor appetite in a market that has been receptive to new listings — but less so to ones by Chinese tech companies.

United Airlines makes a big bet on business travel. The airline placed an order for 270 planes, the biggest purchase by an American carrier in at least a decade. Much of the new seating capacity will be for first-class and business class, as United hopes to attract high-paying customers traveling for work.

Meet the S.E.C.’s new enforcement chief. The agency picked Gurbir Grewal, New Jersey’s attorney general and a former federal prosecutor, to lead its all-important enforcement division. The previous pick for the role, Alex Oh, resigned after a federal judge criticized the conduct of lawyers representing Exxon Mobil, including her, in a lawsuit.

Google and Microsoft take the gloves off. A six-year truce between the tech giants, in which they pledged to call off litigation and to not complain to regulators about each other, has expired, The Financial Times reports. That portends a new round of legal battles as antitrust regulators more closely scrutinize the tech industry.

The New York City mayoral race plunges into chaos. The city’s Board of Elections posted an updated vote tally in the Democratic primary yesterday, showing a tightening race between Eric Adams and Kathryn Garcia — only to pull down the data. The problem: It mistakenly included sample ballot images, skewing the results.

OPEC and its allies ride high

The group of oil producers known as OPEC Plus, which includes Saudi Arabia and Russia, will convene for its monthly meeting tomorrow to discuss production targets. They’ll be doing so from their strongest position since before the pandemic, The Times’s Stanley Reed writes.

Oil prices are soaring. At about $75 a barrel, Brent crude is up 85 percent from November, propelled by the global recovery from the pandemic, OPEC Plus’s keeping a lid on supply and U.S. shale producers’ throttling their production in response to pressure from investors to cut spending.

The good times for oil producers may not last: Analysts expect prices to climb for a few more years — perhaps hitting $100 a barrel for the first time since 2014 — before a drop as countries reduce their use of petroleum because of climate change concerns.

But don’t expect drastic supply increases. Saudi Arabia, the major power behind the group, may consent to modest hikes in production, but is wary of huge shifts — and enjoys the current trajectory of oil prices.

“Just as we found we can eliminate some business travel, we’re going to find we can get rid of some dumb bureaucracy in American corporations.”

— Charlie Munger of Berkshire Hathaway, predicting how businesses would become more decentralized — like Berkshire — after the pandemic.

Checking in on crypto E.T.F.s

Banks and investment managers say clients are clamoring for cryptocurrency products, with Citigroup and Goldman Sachs among those launching new services for wealthy clients and institutional traders in recent weeks. But in the U.S. at least, the prospects for regulatory approval of a truly mainstream crypto investment vehicle, a Bitcoin exchange-traded fund, remain unclear. And it’s not for lack of trying.

Ark Invest is the latest firm to pitch a Bitcoin E.T.F., with the buzzy fund management company run by Cathie Wood proposing an E.T.F. in partnership with 21Shares that tracks the cryptocurrency’s price, according to a filing this week. It joins other established brands like Fidelity and VanEck in asking the S.E.C. to approve Bitcoin E.T.F.s, which would give investors exposure to Bitcoin without having to hold the cryptocurrency directly, like the many funds that track the price of gold or oil.

The first to file for S.E.C. approval of such a vehicle, in 2013, were the Winklevoss twins of Facebook fame, who founded the crypto exchange Gemini. This month, the S.E.C. delayed a decision on VanEck’s request for the second time as it collects public comments on Bitcoin markets’ liquidity, transparency and susceptibility to manipulation. Bitcoin’s recent volatility likely isn’t helping.

Regulators’ concerns are “outdated and misplaced,” given significant trading volume sand established exchanges with reliable pricing, Matthew Sigel, the head of digital assets research at VanEck, told DealBook. “E.T.F.s are generally the most liquid and transparent way to get exposure to many kinds of assets,” he said. “If we agree that E.T.F.s are good, then why should Bitcoin be unique in its exclusion?”

Brazil just approved a Bitcoin E.T.F., the first in Latin America, and Canada has a few. Britain, like the U.S., is taking it slow. Crypto rules do not appear on the S.E.C.’s latest agenda.

The bias is coming from inside the machine

Artificial intelligence used to be viewed as a cure-all for making business less biased. Computers, it was assumed, were less prejudiced than humans in evaluating job candidates, setting salaries, approving loan applications and weighing other crucial decisions. But many increasingly believe that A.I. may be erecting higher barriers to jobs, loans and the like for people of color.

The answer, for some, is more A.I. Parity is one of several companies, both old and new, rushing to address the demand for A.I. cleansing, The Times’s Cade Metz reports. It uses A.I. to help companies identify and remove the bias in their systems. “They are acknowledging that you need to turn over the rocks and see what is underneath,” said Liz O’Sullivan, a veteran of the bias debate who was named Parity’s C.E.O. this month.

Regulators are driving demand for services that help companies eliminate bias in A.I. systems. The F.T.C. issued a warning on the topic this year, and the E.U. has drafted legislation. Within the industry, there is a growing realization that measures need to be taken before the bias in algorithms gets worse. Companies that have invested billions in cost-saving A.I. systems don’t want to have to stop using them.

But can A.I. solve the problems that A.I has created? Sendhil Mullainathan says it can. The economist and contributor to The Times, who teaches a class on A.I. at the Chicago Booth School of Business, co-authored a study nearly 20 years ago that found that applicants with names like Emily and Greg were more likely to get called in for an interview than those named Lakisha and Jamal. Now, he uses A.I. to study bias. Unlike human systems, A.I. systems can be easily and quickly analyzed for bias. That’s an advantage, but not the answer. More regulation is likely on the way.

In I.P.O. news: The clickbait ad giant Outbrain filed to go public; shares in the SoftBank-backed Chinese grocery app Dingdong rose 19 percent in their U.S. market debut; and ChemChina is likely to raise $10 billion from the I.P.O. of the agri-chemical producer Syngenta. (NYT, Reuters)

The eyewear giant EssilorLuxottica, which owns Ray Ban, will go ahead with its $8.7 billion takeover of the Dutch retail outlet GrandVision after all. (Bloomberg)

Top Fed officials are increasingly divided over how to respond to inflation. (NYT)

Senator Joe Manchin, Democrat of West Virginia, said he was open to passing a big infrastructure bill along party lines — depending on its price tag. (Insider)

Many vendors have had to give Amazon warrants, which give the e-commerce giant the right to buy stock at potentially low prices, to secure partnerships with the company. (WSJ)

General Motors announced the creation of a $25 million climate equity fund as it transitions to an all-electric vehicles company. (Detroit Free Press)

How companies are branding themselves as “green” to win over eco-conscious investors, despite evidence that they may not be. (WSJ)

The hit Broadway production “Hamilton” has secured a lot of Benjamins — up to $50 million worth — from federal pandemic aid programs. (NYT)

We’d like your feedback. Please email thoughts and suggestions to [email protected]