The 77-year old ice cream shop is tweaking its logo, employee uniforms and packaging to update the brand. It’s the first major update for Baskin-Robbins since 2006, according to the company. It will also sell merchandise, including bikes and bucket hats, from a dedicated online store for the first time. And Baskin-Robbins will unveil new flavors as part of the refresh.
For years, the Baskin-Robbins logo has been pink and blue. “BR” and the words “Baskin Robbins” were printed in a blocky, childish font.

In the new logo that playful font is gone, replaced by a crisper version. The new branding comes in brown and pink, brown and blue, and pink and white.

In other words, the new Baskin-Robbins is all grown up. The makeover has been a long time coming.

“When we really think about the journey … it started four years ago,” said Jason Maceda, Baskin-Robbins president. That included “really listening to our guests.”

Baskin-Robbins’ leadership team heard that some customers felt very attached to the brand, which they associated with childhood trips with parents or grandparents. But they also heard that there were “some opportunities in being more relevant,” Maceda said.

It’s important for brands like Baskin-Robbins to gain traction with younger consumers -— not just people who remember it from their youth -— so they have new customers coming in.
The company’s leadership has been addressing the feedback in a few ways. In late 2018, for example, Baskin-Robbins introduced a new layout and design for some stores. These so-called “Moments” stores feature a more modern design, digital menu boards, more ice cream display cases and more toppings and offerings.
So far, there are about 70 of these stores altogether, Maceda said. That’s still just a small portion of the over 7,700 Baskin-Robbins stores open globally.
The rollout of the “Moments’ stores slowed during the pandemic, Maceda noted, adding that he’s “excited to get that going again.”
Still, the pandemic was good for ice cream sales. Baskin-Robbins was taken private in 2020 and doesn’t publicly disclose sales figures. But Maceda said sales grew 3.5% in 2020, and 10.9% last year. Overall, ice cream sales at US scoop shops grew 4.4% from 2019 to 2021, according to Euromonitor International.
To help keep that momentum going, Baskin-Robbins hopes to make a splash with its new look, flavors and merchandise. 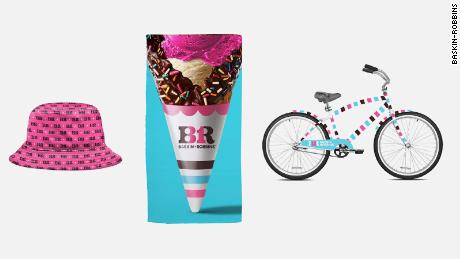 The new branding draws on the company’s history, noted Jerid Grandinetti, VP of marketing and culinary at Baskin-Robbins.
Brothers-in-law Irvine “Irv” Robbins and Burton “Burt” Baskin founded the ice cream company in 1945. But they didn’t brand it as “Baskin-Robbins Ice Cream” until 1953.
“The original advertising campaign in 1953 was built around circus iconography,” said Grandinetti. That campaign used the pink and brown that Baskin-Robbins is reviving today.
That was also the year that Baskin-Robbins introduced the idea of 31 flavors, one for every day of the month. Both the new and old logos have “31” hidden between the B and the R when the letters are placed together.
Today, Baskin-Robbins has hundreds of flavors in its portfolio. But it still has room for more.
Part of the refresh includes three new limited-time flavors: One is Non-Dairy Mint Chocochunk, another is Totally Unwrapped, made with peanut butter and chocolate ice creams, caramel swirls, fudge-covered pretzels, and fudge and caramel covered peanuts. Grandinetti refers to that one as a “deconstructed candy bar.”
The third flavor, Ube Coconut Swirl, is made with coconut and ube (a purple yam commonly used in Filipino desserts) ice creams with ube-flavored swirls.
Totally Unwrapped is the April flavor of the month, while the other two will be available through the spring, and could stick around for longer depending on how customers react.
In addition to the new flavors and its new look, the company is rolling out some swag, including branded scrunchies, sweatshirts, bucket hats and even bicycles.

Bikes may seem like an odd choice of swag for an ice cream company. But the brand’s new tagline, “Seize the Yay,” is about celebrating small, joyous moments. And nothing says “yay” like a ride on an ice-cream themed bike.
“We want to make sure that we celebrate along with our guests,” said Grandinetti. “What better way to do that than to provide some fun buzzworthy” items, like a bicycle, as well as clothing that can be “part of their everyday lifestyle.”
Source: Read Full Article