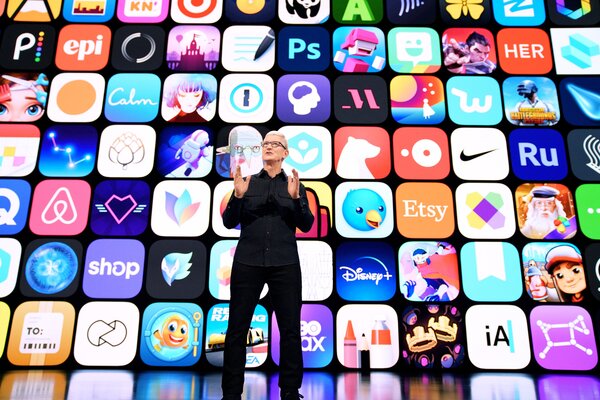 When Apple settled a lawsuit yesterday brought by a group of small app developers, it represented a shift in the balance of power in an app ecosystem that the tech giant has long tightly controlled. Just how much of a shift is up for debate.

What did Apple agree to?

Developers will now be allowed to tell customers, via email and other channels (but still not inside apps), about alternative payment methods that avoid Apple’s commissions. Apple framed this as a major concession, although it selectively enforced the rule before.

It agreed not to raise the 15 percent commission that Apple collects from small app developers on customer purchases for at least three years.

It will set up a $100 million fund for payouts to developers who made less than $1 million a year from Apple’s app store in the past few years. They will be eligible for payouts between $250 and $30,000 each.

It will publish an annual report on the number of apps it rejects or removes from its App Store, as well as data on its search results.

Does this change anything? Perhaps little for developers, but for Apple it might be a lot. Developers had already been pushing their customers to circumvent Apple’s commissions, and the settlement officially blesses that arrangement. Seen through the lens of Apple’s other legal troubles, the settlement could be strategically shrewd, easing the threat of more government action, and shifting Washington’s focus to other tech giants who have been less willing to make similar concessions.

Apple still faces a broader lawsuit about its App Store from Epic Games (the maker of Fortnite), with both companies awaiting a decision from a federal judge. The Supreme Court has also allowed other antitrust class actions against Apple to move forward. Notably, yesterday’s settlement is subject to approval by the same judge who is presiding over the Epic Games and consumer suits against Apple.

“We will not forgive, we will not forget.” President Biden vowed to hunt down those responsible for two explosions at the Kabul airport that killed at least 13 American service members and more than 60 Afghan civilians. The attacks add to the chaos in Afghanistan after the Taliban takeover and ahead of the final withdrawal of U.S. troops next Tuesday.

China reportedly puts a freeze on I.P.O.s abroad. New rules in the works from China’s securities regulator, sources told The Wall Street Journal, would stop Chinese companies with sensitive consumer data from listing outside of China. The purported move underscores Beijing’s determination to limit the ambitions of its homegrown tech firms. Separately, China’s Supreme Court called the 996 work culture — working 9 a.m. to 9 p.m., six days a week, which is common in the country’s tech industry — illegal.

The U.S. Supreme Court lifts a federal ban on evictions. The ruling will end the moratorium, which was set to expire in October, unless Congress acts to put in a new ban. The decision, which three liberal justices dissented from, is a blow to efforts to keep up to 11 million people in homes while states (slowly) disburse rental aid.

In other housing news, California advances a zoning law to open suburbs to development. To ease a housing shortage, state lawmakers voted to allow two-unit buildings on lots that for generations were reserved for single-family homes. Similar rezoning battles are happening nationwide, often pitting housing advocates against homeowners.

The Long-Term Stock Exchange gets its first listings. Two tech companies, Asana and Twilio, listed their shares on the upstart exchange, which is designed to discourage short-term thinking and promote an embrace of all stakeholders, not just shareholders. The companies are already listed on the N.Y.S.E., making the move largely a technicality, but the exchange hopes others will be encouraged to list there. The exchange has gotten off to a slow start since it was first conceived a decade ago.

End of an era at Bank of America

Two of the architects of Bank of America’s recovery after the financial crisis, who helped chart a new path for the banking industry as a whole, are headed for the exit.

Yesterday, Bank of America announced that Anne Finucane, the bank’s vice chair and one of Wall Street’s most powerful women, and Thomas Montag, the bank’s chief operating officer, would retire at the end of the year. Their departures also open the door for new leadership at the country’s second-largest lender, The Times’s Lananh Nguyen reports.

Finucane was a pioneer on Wall Street, for many reasons. She joined Bank of America C.E.O., Brian Moynihan, who once joked that “we all report to Anne,” leaned heavily on Finucane in the wake of the financial crisis to rebuild the bank’s image, which had become intertwined with subprime lending.

Under Finucane, 69, Bank of America emerged as one of the more forward-thinking firms in finance, leading the way on environmental, social and governance issues, which Finucane promoted long before most bankers took them seriously. She articulated the bank’s position when it stepped back from financing companies that make military-style assault rifles in 2018, and when it stopped lending to private prison companies in 2019.

Montag, who came from Merrill Lynch, was crucial to restoring the firm’s Wall Street arm after the crisis. Montag, 64, who maintained a hard-driving culture, is a polarizing figure. During the pandemic, some employees felt pressure to be in the office even as other banks embraced (or at least tolerated) remote work.

In an email to staff, Finucane said she planned to continue to work on how banking can do more to fight climate change. “She’s been one of the leaders in helping to open people’s eyes” to what companies can do on climate, said John Kerry, President Biden’s climate envoy and a former chair of the bank’s advisory council.

While neither Finucane or Montag were likely in line to replace Moynihan, 61, their retirements will kick off a reshuffling of the executive ranks that will send a signal about who will lead the bank next. “Let the jockeying begin,” said Mike Mayo, a Wells Fargo analyst who has tracked the bank for decades.

“The competitive advantage crypto has that most people haven’t understood yet is that we just have more fun.”

— Cuy Sheffield, Visa’s head of crypto, on the payment giant dabbling in NFTs and other projects in the blockchain industry.

As digital media companies vie for growth, many are looking to scale through deals. Two well-known brands announced mergers yesterday, while a third revealed a shake-up. Here’s the rundown:

Politico sold itself to Axel Springer, the German publishing giant that owns Insider and Morning Brew, for more than $1 billion, according to sources. A key attraction for the buyer: Politico’s subscription service, which generates more than half its $200 million in annual revenue. Robert Allbritton, who helped found Politico in 2007, will remain publisher, and the company will operate separately from Springer. The deal could quash Springer’s talks to acquire Politico’s competitor Axios. “Why would you consider any other alternative?” Springer’s C.E.O., Mathias Döpfner, told employees at a town hall meeting.

Forbes said it would go public via SPAC, in a deal valuing it at $630 million. Founded as a magazine in 1917, the outlet is mostly digital these days, although it still publishes a print edition eight times a year in the U.S. The Forbes family sold a majority stake to Integrated Whale Media in 2014.

Vice announced layoffs and a shift to video. The site, which has had its own SPAC discussions, cut nearly 20 full-time jobs, mostly writers and text editors, as it shifts its emphasis to video.

What will Jay Powell say today?

Not long ago, many market watchers had marked today as a crucial date on the calendar. Jay Powell, the Fed chair, is set to deliver his annual remarks at the Jackson Hole research conference, where U.S. central bank officials often unveil important policy shifts. It seemed like the moment when the Fed chief would announce the start of a tapering of the central bank’s $120-billion-per-month bond purchases, but now it looks like it won’t be as momentous as that.

With coronavirus cases on the rise, endangering the economic recovery, many believe it’s premature for the Fed to make a major shift in its stance. The Jackson Hole symposium itself was forced to switch to a virtual format just a week ago. Powell’s speech is scheduled for 10 a.m. Eastern, and you can watch it here.

Here’s what some expect from the event …

“Two to three months ago, people were expecting the whole taper plan at Jackson Hole,” Priya Misra of TD Securities told The Times. “Now, it’s more the economic outlook that people are struggling with.”

“You don’t want to rush through tapering or rush into rate hikes when Delta is still a threat,” Brett Ryan of Deutsche Bank told Bloomberg.

… and what could be left unsaid:

The timing of tapering. “The longer Powell waits to detail his own thinking, the greater the challenges to maintaining Fed unity, and the bigger risk that the central bank will be forced into a more disorderly slamming of the policy brakes down the road,” wrote Mohamed El-Erian in an opinion article for The Financial Times.

The Fed’s role in inequality. The theme of the Jackson Hole gathering is “Macroeconomic Policy in an Uneven Economy,” and Karen Petrou of Federal Financial Analytics told DealBook that “uneven is a euphemism for unequal.” She’d like Powell to acknowledge how the Fed contributes to economic unevenness and adopt a different approach. But with Powell’s term as chair expiring in February, she said he’s likely to stick to vague statements, “shadowboxing” his way to renomination.

Brazil’s Nubank, backed by Berkshire Hathaway, is aiming for an I.P.O. valuation over $55 billion, which would make it one of the world’s largest fintech companies. (Reuters)

Evergrande, the Chinese developer struggling with debts, is poised to sell off assets to shore up its finances. (Bloomberg)

The top two shareholders in the Nasdaq-listed Chinese social media company Joyy want to take it private in a deal that could be worth $8 billion. (Reuters)

Former President Donald Trump is being sued by a group of Capitol Police officers who served during the Jan. 6 riot, the first suit to accuse Trump of working in concert with far-right extremists to disrupt the transition of power. (NYT)

Calls are growing to discipline doctors who spread misinformation about the coronavirus. (NYT)

Peloton is facing multiple investigations of how it handled a recall following the death of a child and other injuries connected to its treadmills. (CNBC)

Will Elizabeth Holmes tell her side of the Theranos story at her trial? (WSJ)

Tesla wants to sell electricity to Texas, a filing with the state’s utility commission shows. (CNBC)

Why Mastercard is getting rid of the magnetic stripe on its cards. (Yahoo Finance)