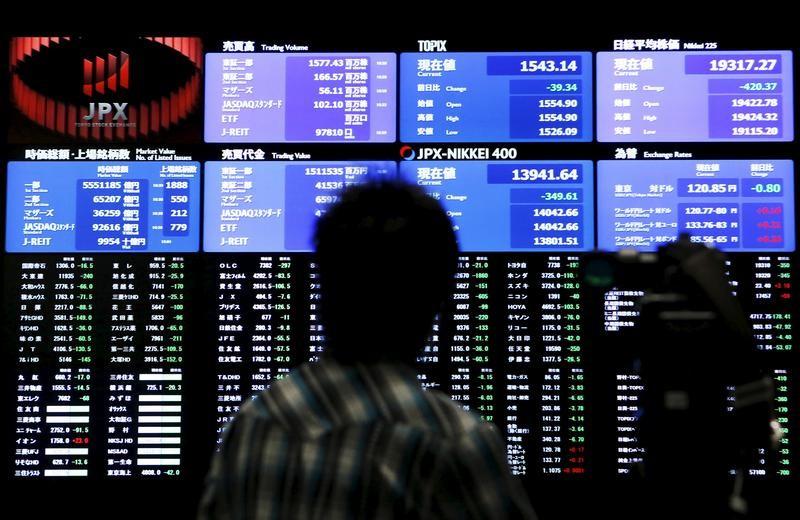 The markets also took heart after data released on Sunday showed factory activity in China unexpectedly grew for the first time in four months in March, suggesting government stimulus measures may be starting to have an impact.

If sustained, the improvement in business conditions could indicate that manufacturing is on a path to recovery, easing fears that China could slip into a sharper economic downturn.

Stocks in Asia took cues from Wall Street, with the S&P 500 posting its best quarterly gain in a decade on Friday amid trade optimism. [.N]

The United States and China said they made progress in trade talks that concluded on Friday in Beijing, with Washington saying the negotiations were “candid and constructive” as the world’s two largest economies try to resolve their drawn out trade war.

“The ongoing U.S.-China trade conflict has provided a steady stream of conflicting signals for the markets. But as a whole the negotiations appear to be headed toward a conclusion,” said Soichiro Monji, senior strategist at Sumitomo Mitsui DS Asset Management.

“Hopes that the United States and China would reach an agreement on trade as early as this month are enabling stocks to begin the first quarter on a positive tone.”

In the currency market, the dollar index against a basket of six major currencies was little changed at 97.223 after going as high as 97.341 on Friday, its strongest since March 11.

The greenback had benefited from the flagging pound, which was on track to post its fourth day of losses in the wake of the ongoing Brexit saga.

Sterling took its latest knock after British lawmakers rejected Prime Minister May’s Brexit deal for a third time on Friday, sounding its probable death knell and leaving the country’s withdrawal from the European Union in turmoil.

The Treasury 10-year yield had sunk to the 15-month low as risk aversion driven by concerns toward a global economic slowdown gripped the financial markets toward the end of March.

Oil prices posted their biggest quarterly rise in a decade during the January-March, as U.S. sanctions against Iran and Venezuela as well as OPEC-led supply cuts overshadowed concerns over a slowing global economy. [O/R]