One man died and two others were injured after a man stabbed passersby on a busy street in Australia’s second-largest city on Friday.

Police were called to an incident in Bourke Street, in the heart of Melbourne, after reports of smoke and a car in flames at 4:20 p.m. local time.

The suspect punched an officer and threatened them with a knife. At the same time, passersby called out that members of the public had been stabbed.

Police shot the suspect in the chest. He later died of his injuries in hospital, Victoria Police chief commissioner Graham Ashton told reporters on Friday.

The three passersby who were stabbed — all men — were all taken to hospital. One of them died of his injuries in hospital. 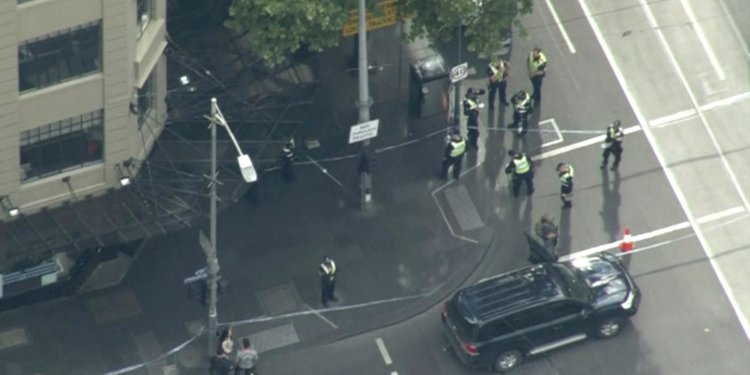 Police guard a street corner after the attack, which killed one person and injured two others. Australian Broadcasting Corporation via AP

Fire and rescue officials also found gas cylinders inside the vehicle. A bomb response unit team remains at the scene.

Authorities are treating the attack as a terrorism incident, Ashton said.

The suspect was known to both state police and federal intelligence authorities. His identity was not revealed but police said he came to Australia from Somalia in the 1990s. He lived in northern Melbourne.

The police officers who first responded to the scene received minor injuries.

Ashton said were not looking for any other attackers, but declined to categorize the incident as a “lone wolf attack.”

Unverified, gruesome video shared online showed a car on fire pulled over to the street of the street. It then showed a man approach two police officers with what appears to be a knife, and attempt to stab them.

Friday’s incident occurred in the same street where the accused driver James Gargasoulas allegedly drove down pedestrians during the lunchtime rush in January 2017. Witnesses are still giving statements to that attack.