WASHINGTON — President Biden, spurred on by a lackluster January jobs report and Democratic support for his $1.9 trillion economic aid proposal, said on Friday that the economy was in need of urgent help and that Republicans should either get on board with a robust stimulus package or expect his plan to pass without their support.

“I believe the American people are looking right now to their government for help to do our job, to not let them down,” Mr. Biden said. “So I’m going to act, and I’m going to act fast.”

His remarks at the White House came only hours after the Senate endorsed the president’s $1.9 trillion stimulus package along party lines, and over unified Republican opposition. Vice President Kamala Harris cast her first tiebreaking vote to approve a budget blueprint, 51 to 50, that will allow the proposal to move forward. The House quickly followed suit on Friday, passing the budget resolution 219 to 209.

House committee heads and Democratic leaders met on Friday morning with the president at the White House to discuss legislative strategy. Afterward, Speaker Nancy Pelosi said it was her goal to have a bill approved and moved to the Senate within two weeks. Representative James E. Clyburn of South Carolina, the majority whip, told reporters that the package “absolutely” had enough Democratic votes to pass the House.

Mr. Biden, emboldened by that support, essentially told Republicans in his most stark terms to date to either suggest changes to the plan that could earn bipartisan support, or prepare for Democrats to bypass them and approve a package that is popular with voters.

The president pointed to the report released on Friday morning that showed that the economy added only 49,000 jobs in January, and just 6,000 in the private sector. The labor market remains 10 million jobs below its pre-pandemic levels, and many people have been out of work for more than six months.

“If I have to choose between getting help right now to Americans who are hurting so badly and getting bogged down in a lengthy negotiation or compromising on a bill that’s up to the crisis, that’s an easy choice. I’m going to help the American people who are hurting now,” Mr. Biden said. “What Republicans have proposed is either to do nothing or not enough.”

January’s anemic gains elicited broad consensus among Democrats and Republicans that the economic recovery was stalling. But they split on whether the president’s push for a $1.9 trillion jolt was the right approach, with Democratic leaders echoing his calls for aggressive action and Republicans warning of increased budget deficits and accusing Mr. Biden of forgoing bipartisanship.

Republicans and their allies have not yet coalesced around a consistent critique of Mr. Biden’s proposals. Some have argued that the economy is just now starting to reap the benefits of a $900 billion aid package Congress approved in December, and that the economy does not need another big dose of stimulus.

Others, like Representative Michael C. Burgess, Republican of Texas, have emphasized the nation’s growing debt. Mr. Burgess argued that Mr. Biden’s plan would add “nearly $2 trillion to the deficit,” before listing a series of complaints about the package, including that it will send money to states he accused of mismanaging their budgets.

But the main argument Republicans have lodged against the effort so far is that by not attracting Republican support, Mr. Biden is breaking from his own campaign call for bringing people together across party lines.

“After all the talk of unity,” Senator Charles E. Grassley of Iowa, the top Republican on the Finance Committee, said on Friday, “President Biden and congressional Democrats took the partisan route right out of the gate.”

Mr. Biden and his aides rejected that criticism, contending that “unity” referred to bringing together the voting public, not members of Congress.

“The president ran on unifying the country and putting forward ideas that would help address the crises we’re facing,” said Jen Psaki, the White House press secretary, citing poll numbers showing bipartisan support among American voters for the plan. “He didn’t run on a promise to unite the Democratic and Republican Party into one party in Washington.”

“This package has the vast majority of support from the American public,” Ms. Psaki said. “This is something that people want. They want to see it passed. They want these checks to get into communities. They want this funding to go to schools. They want more money for vaccine distribution.”

Still, Mr. Biden held out the chance that Republicans would come on board and allowed for the possibility that his plans could change slightly to appease moderates in both parties. That included acknowledging that he favored narrowing who receives the $1,400 direct payments included in the proposal to ensure that those earning more than $300,000 would not benefit. He did not specify what threshold he would accept to begin phasing out the checks, but made clear the starting amount would not change.

“I’m not cutting the size of the checks,” he said. “They’re going to be $1,400, period. That’s what the American people were promised.”

The Senate voted 99 to 1 on Thursday to restrict the direct payments from going to high earners, though it did not specify what income level was too high.

Democrats are moving quickly to pass Mr. Biden’s “American Rescue Plan” — which includes money to fight the pandemic and several expansions of the social safety net — through Congress with limited changes. A Quinnipiac University poll this week found nearly seven in 10 voters backed Mr. Biden’s plan, and another poll released this week, by the liberal group Protect Our Care, found nearly three-quarters of voters supported the plan after its provisions were described, including half of Republican respondents.

Biden administration officials continued their push to build support for the plan. Ms. Harris and Janet L. Yellen, the Treasury secretary, met on Friday with members of Black Chambers of Commerce around the country to discuss the plan.

Ms. Yellen focused on the disproportionate effect that the coronavirus and its economic toll had taken on Black people, Latinos and other people of color, saying the president wanted to push through a robust aid package to try to mitigate those inequities.

“African-Americans were the first to lose their small businesses. They were the first to lose their jobs. And we’ve seen early data that suggest Black workers will be the last rehired when the economy opens back up,” Ms. Yellen said. “This is why the American Rescue Plan is badly needed: to make sure that this pandemic isn’t another generational setback for racial equality.”

While congressional Democrats remain largely united on the need to pass Mr. Biden’s proposals, they remain split on some crucial details.

The House Democratic leaders who met with Mr. Biden on Friday said they had been pressured by their rank and file to resist efforts to scale back the payments, which, along with $600 approved in December, would add up to the $2,000 checks that Democrats campaigned on to win Senate runoff elections in Georgia last month.

At least one Republican is also pushing to keep the income limit at which payments begin phasing out at $75,000 for individuals, as Mr. Biden initially proposed. Representative David B. McKinley, Republican of West Virginia, joined Representative Lisa Blunt Rochester, Democrat of Delaware, on Friday in pushing colleagues not to narrow eligibility for the payments.

“Today’s weak jobs report highlights how American families are struggling and need immediate relief,” Mr. McKinley said in a post on Medium. “By providing a third round of individual relief, millions of American families would receive the help they need.” 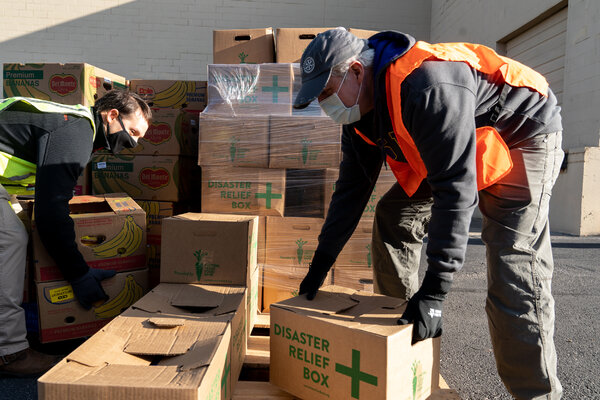 Democrats, including Mr. Biden and his aides, also called the job numbers a call for action on the proposal.

“We face the greatest crisis in our lifetimes. Americans are counting on us,” Representative Joseph D. Morelle, Democrat of New York, said on the House floor as he urged his colleagues to vote for the budget resolution.

Mr. Morelle emphasized the death toll from the virus, which has killed more than 450,000 Americans. “It is families of all political persuasions that are struggling,” he said.

The Senate budget resolution that paved the way for party-line approval of the stimulus bill passed after an all-night series of votes on amendments, many of them meant to limit Mr. Biden’s ability to push his $1.9 trillion proposal through. One such effort succeeded: Overnight, the Senate agreed to a proposal by Senator Joni Ernst, Republican of Iowa, to prohibit any minimum wage increase during the pandemic.

Mr. Biden’s plan calls for raising the federal minimum wage to $15 per hour by 2025.

Democrats did not contest Ms. Ernst’s proposal — which passed on a voice vote without any record of those in support and those opposed — arguing that it was never their intention to increase the wage immediately. But their reticence to officially record a vote on the matter was a signal that the wage increase might ultimately lack the support to pass in an evenly split Senate, where at least one Democrat, Senator Joe Manchin III of West Virginia, is on record in opposition.

The wage proposal could also struggle to pass muster with the Senate parliamentarian, who could rule it runs afoul of the arcane rules of the budget reconciliation process that Democrats are using to pass their bill, as Republicans did with tax cuts in 2017.

Ms. Pelosi told reporters on Friday that she was not sure whether the $15 minimum wage would become law as part of the plan. “We just don’t know,” she said.