New York (CNN Business)In the days after its November IPO, electric truck maker Rivian was briefly one of the world’s most valuable automakers despite not yet having reported a single sale. But its stock has been sliding steadily since then, which just resulted in a big loss for…..Ford?

Yes, that’s right. Ford (F), which has been making cars and trucks for more than a century and has actually sold more electric vehicles than Rivian, just reported a loss because of the slide in Rivian stock.
You see Ford, along with Amazon (AMZN), was an early backer of Rivian, which was founded in 2009 and went public last year. Ford invested $500 million in the startup company back in April 2019, when the two companies announced plans to develop electric trucks together. Those plans never came to fruition, but Ford kept its investment in place.

And despite the stock’s slide over the last five months, it’s probably glad that it did.

Rivian’s IPO in November was a huge hit, raising $12 billion for the company in the biggest public offering since Facebook’s debut in 2012. Everyone wanted to get in on what could be the next Tesla, and they all thought that Rivian might just be the company to do so. Shares more the doubled in the first week of trading, making it more valuable than any automaker on the planet other than Tesla (TSLA) and Toyota (TM).

Then reality set in.
A couple of weeks later, Ford and Rivian announced they would not be working on a truck together, sending shares of Rivian plunging as much as 17% in a single day. In December it announced plans for a second factory, but it also reported that initial sales of its electric pickup fell short of expectations. The company’s shares continued their-post IPO decline, falling 10% in a day.

By the end of 2021, Rivian shares were 40% lower than they’d been from their highest close the week after the IPO. Still, it was worth about $92 billion, or about $10 billion more than Ford itself was worth. That meant that Ford’s initial $500 million investment in Rivian was worth $10.6 billion. And so it was that Ford reported a gain on that investment of $9.1 billion for the year.
Rivian’s shares continue to slide as supply chain problems made investors wary of any automaker not named Tesla, whether they were making either electric or gas powered vehicles. 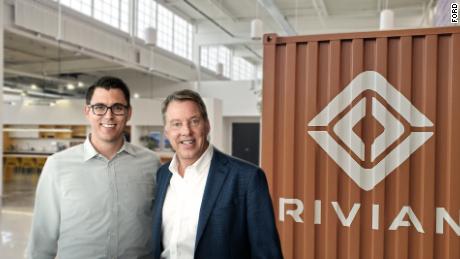 So far this year, Rivian shares are down 70% through Wednesday’s close. So Wednesday afternoon Ford announced it had taken a $5.4 billion pre-tax charge related to its investment in Rivian, which had lost about half of its value during the course of the first quarter.
And that resulted in Ford reporting a $3.1 billion net loss. It would have had a $1.6 billion profit without special charges.
That $1.6 billion profit, excluding special items, was a bit better than Wall Street forecasts, although it was down 44% from what it reported on that basis a year earlier. Auto revenue of $32.1 billion was down 4%, although it beat forecasts by about $1 billion. 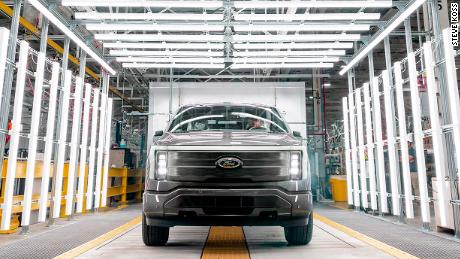 As was the case throughout the auto industry, Ford’s supply chain problems, such as a shortage of computer chips, limited the number of vehicles it could make and sell. In fact it had 53,000 vehicles at the end of the quarter that were mostly completed but awaiting installation of components affected by the semiconductor supply shortage. On Wednesday, Ford CEO Jim Farley described the results as “mixed.”

“The appeal of our new products is really clear, and customers demand is extremely strong beyond the supply constraint of our industry,” said Farley on a call with investors “However, we are still grappling with persistent supply chain issues that prevent us from posting even stronger quarter.”
On Wall Street, which had feared the worst, investors shrugged off Ford’s charge for Rivian and focused on its better than expected results. And thus Ford shares edged up more than 1% in after-hours trading.
Source: Read Full Article