Birthday Candles, Noah Haidle’s Broadway dramedy starring Debra Messing as a woman who, over the course of the play’s 90 minutes ages from 17 to 107, has just about all the right ingredients for the poignant, funny and life-affirming experience it sets out to be. If everything doesn’t always come together just as it should, well, even an imperfect cake is better than no cake at all.

Opening tonight at the American Airlines Theatre, the Roundabout Theatre Company production of Birthday Candles casts the always likable Messing, having already won us over from her years on Will & Grace, as Ernestine, whom we first meet on her 17th birthday as she joins her mother in a yearly tradition of cake-baking.

“Eggs, butter, sugar, salt,” says mother Alice, reciting a little speech that itself will become part of Ernestine’s lifetime birthday tradition. “The humblest ingredients. But when you turn back and look far enough, you see atoms left over from creation.”

But even the existential qualities of cake-baking can’t quite satisfy the young Ernestine, who at 17 wants so much more than is available within the confines of a Grand Rapids kitchen. “I am a rebel against the universe,” she dramatically proclaims to her mom and the world. “I will wage war with the everyday. I am going to surprise God!” 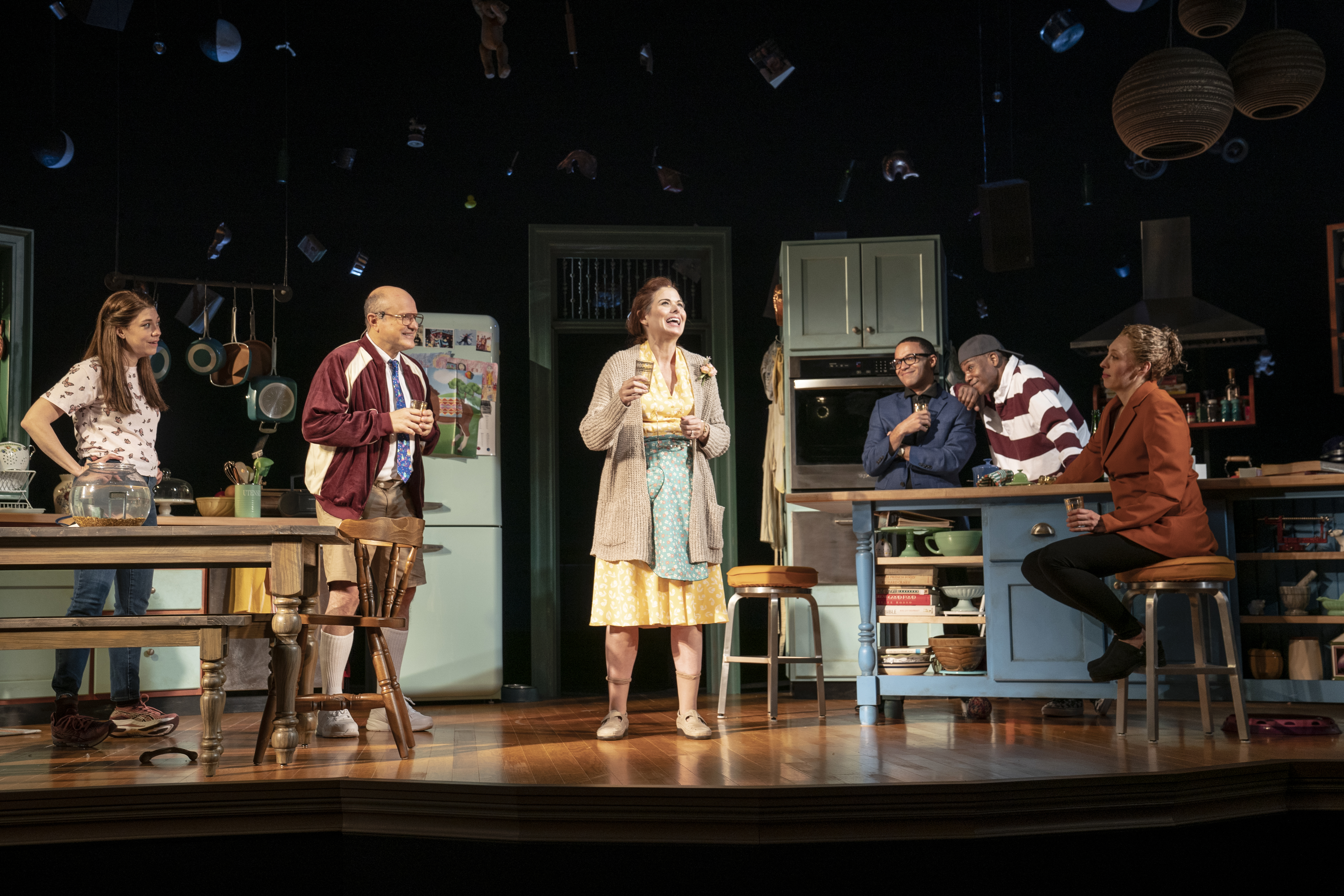 Within minutes, the play will jump ahead, fairly seamlessly, to Ernestine’s 18th birthday, then other years through newlywed days, young motherhood, middle-age and old age, love, loss, harmony and tragedy, each scene featuring the various characters in Ernestine’s life – six actors playing 12 roles in all – as they gather for the annual cake-baking tradition in a sort of same time next year depiction of one woman’s ordinary, extraordinary existence. And, yes, there will be a fully baked cake come curtain.

Over the course of the play’s 90-minute lifetime, we’ll meet (and, more often than not, bond with) Ernestine’s loving mom, troubled daughter and vivacious great-granddaughter (all played by the terrific Susannah Flood, especially effective as the caustic, deeply sad daughter); her beau and husband Matt (John Earl Jelks); her lovestruck classmate, neighbor and seeming missed opportunity Kenneth (Enrico Colantoni); sensitive but defiant son Billy (Christopher Livingston); nervous daughter-in-law Joan and forthright granddaughter Alex (both played by the very funny Crystal Finn); and a few others who come and go.

We see all of the characters age scene by scene, some will fall to illness or personal strife, none – and this hardly needs a spoiler alert, given the play’s premise – will outlive Ernestine. A running joke – or lament, or both – between Ernestine and the doting Kenneth concerns the absurdity of acquaintances asking, following a death in the family, “If there’s anything I can do.”

“Yeah, there is,” Kenneth or Ernestine will then say to the other. “Bring them back. Bring them all back.”

That joke-lament gets to the very heart of what works best in Birthday Candles – the acknowledgement of never-ending loss, whether through death or divorce or hard feelings or the simple act of drifting away. Messing, in particular, captures that bundle of emotions brought on by loss, sudden or otherwise: pain, bewilderment, anger, and slow, slow resignation. And always bewilderment at the absences and the swiftness in which they – and everything else in life – arrive. At its best, Birthday Candles offers a bemused and rather awestruck perspective on the fleeting highs and relentless lows of life.

What the play doesn’t quite manage is balance of a more stylistic bent, moving fitfully between naturalism and a more fabulist approach, the latter marked by some rather twee flourishes (a goldfish or, rather, a 100-year series of goldfishes, all named Atman, which, we’re told, is a Sanskrit word for “the divinity within yourself.” 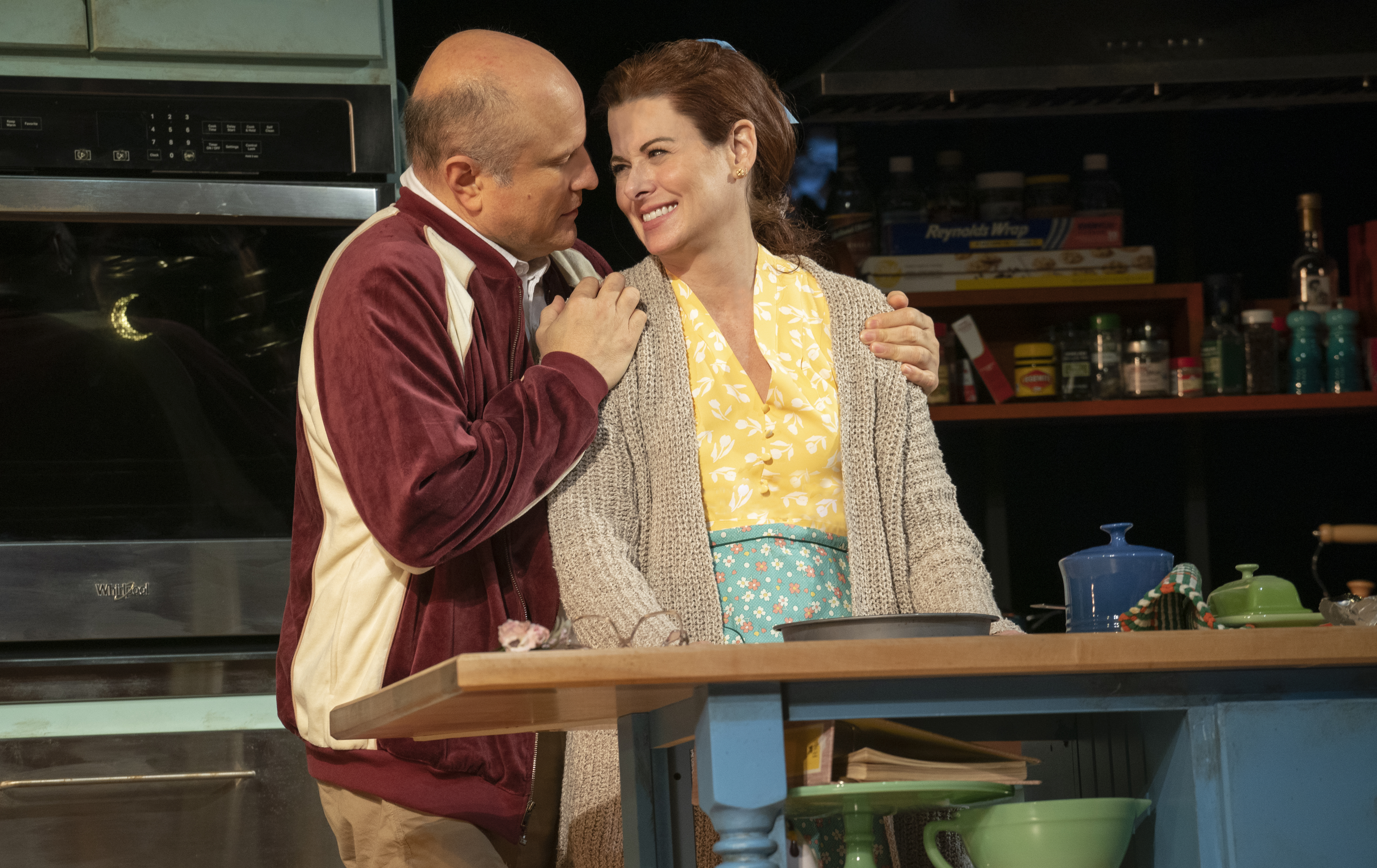 More damaging than that symbolism-fraught fish, though, is the toll taken by the fabulist-versus-realist approach on acting styles. Messing, charming in both the younger and middle-aged iterations of Ernestine, adopts (or is encouraged to adopt by director Vivienne Benesch) the halting, fussy speech pattern that Hollywood in particular has so often used as a sort of old age denotation (see Julianne Moore, The Hours). As her character ages, Messing seems to morph from recognizably Ernestine into a sort of EveryGranny.

Set designer Christine Jones pulls off a more enchanting combination of the utilitarian and the fanciful, with the attractive (and functioning) suburban kitchen and living room spread out below the detritus of a lifetime – dolls, a rocking horse, a frying pan, among many others – hanging high from the theater’s rafters like so many stars. The visual is lovely. (The talented costume designer Toni-Leslie James takes an occasionally less effective approach, here and there relying on too-obvious signifiers and cues – backward baseball caps for the young men, rolled-down support hose (!) for elderly Ernestine.)

Despite whatever missteps, though, Messing and the rest of the cast nicely convey the spectrum of emotions that a life’s sweep encompasses, from happy times to sad (at the reviewed performance, audience sobs and sniffles were as audible as the laughter). Not even a tacked-on final birthday scene that strains credulity can sour the simple, icing-sweet pleasures of Birthday Candles.

Sam Elliott Apologizes For ‘Power Of The Dog’ Comments: “I Feel Terrible About That”