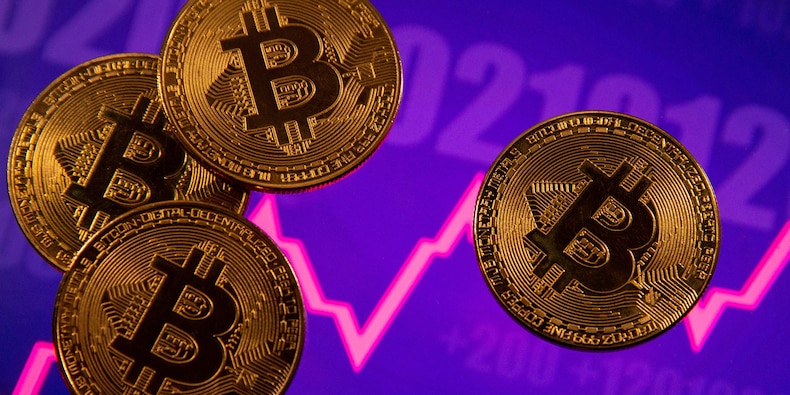 Bitcoin rose as much as 2.6% to $61,229 on Monday as the crypto world prepared for a week dominated by Coinbase’s direct listing on Wednesday. The surge took the coin close to its all-time high of $61,742 reached on March 13.

“With BTC solidly in the upper 50Ks, everyone is looking to see if we can reclaim or surpass that last all-time high… seen a couple of weeks back,” he said.

The big event of the week in the cryptocurrency world is the direct listing of crypto exchange Coinbase on the Nasdaq on Wednesday.

It will be the first listing of a major crypto company, with Coinbase pulling in around $1.8 billion of revenue in the first quarter of 2021. The exchange said private market transactions valued the firm at about $68 billion in March.

D’Anethan added: “Coinbase’s IPO is definitely a supportive move for the space as it is bolstering the legitimacy of the asset class and offering investors new ways to interact with it.”

Edward Moya, senior market analyst at currency firm Oanda, said in an email “a disappointing IPO or excessive concerns over enhanced regulatory oversight could weigh on bitcoin and the other altcoins.”

Bitcoin has more than doubled in 2021 thanks to a renewed interest in digital currencies supported by huge amounts of stimulus from governments and central banks.

Now, many major institutions are moving into the crypto space, adding legitimacy to bitcoin and other currencies.

Yet cryptocurrencies continue to divide the financial world, with many figures saying they are too volatile to become serious investments for major players. Others argue they serve little purpose except speculation.

Read more: A 29-year-old self-made billionaire breaks down how he achieved daily returns of 10% on million-dollar crypto trades, and shares how to find the best opportunities