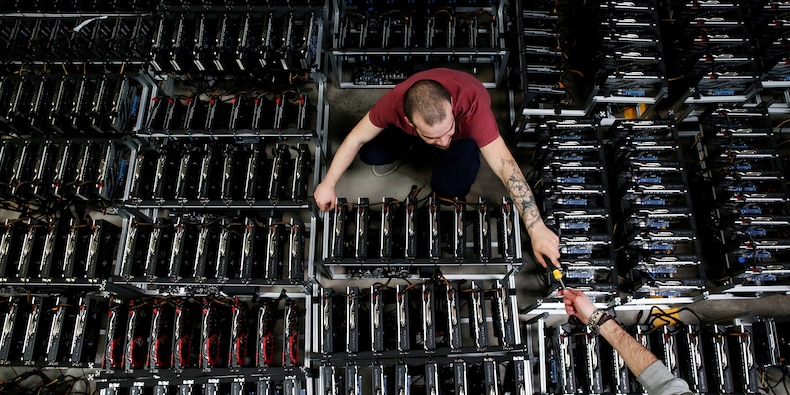 Bitcoin mining can help the development of renewable energy technologies by allowing a quicker return on green investments, according to the head of one of North America's biggest crypto miners.

Mike Colyer, chief executive of Foundry, a sister company of major bitcoin player Grayscale, told Insider he thinks bitcoin can be "a bridge between our current energy production and this future world of renewable energy production."

His argument is the boom in green-energy creation has led to oversupply in many areas, which can be difficult to manage and costly for renewables firms.

Colyer said locating bitcoin mines near renewable energy projects can help deal with this oversupply, in turn helping the development of green technology.

"It allows for a faster payback on those solar projects or wind projects, which means more of them can be built faster in regions where before it was not attractive, because they would produce too much energy for the grid in that area," he said.

Other miners have echoed this argument, although the secretive nature of the industry means it is difficult to gauge the rate of change.

And many remain unconvinced. As the bitcoin price has soared this year, arguments over its intense energy use have heated up, with climate concerns making some investors wary of the world's biggest cryptocurrency.

Bank of America analysts on Wednesday said in a note that bitcoin is "not good news for the environment," estimating that it uses almost the same amount of electricity as the Netherlands.

"Bitcoin's estimated energy consumption has grown over 200% in the past two years, creating large environmental risks," the analysts, including commodities strategist Francisco Blanch, wrote. They noted that most mining is done in China, where coal is dominant.

Bitcoin is "mined" when computers are hooked up to the cryptocurrency's network to verify transactions. As a reward for this work, which involves solving puzzles, miners can sometimes receive small amounts of bitcoin.

Huge amounts of computing power are now dedicated to mining bitcoin, with more drawn in as the price skyrockets.

"The bitcoin algorithm is relentless in its drive for efficiency and cost reduction," he said. "It's built in, there's no stopping it. Every miner in the world is constantly looking for ways to take cost out of the production of bitcoin. And the most cost-effective energy [in North America] is renewable energy."

A report from Cambridge University in September last year estimated 39% of proof-of-work mining is powered by renewable energy, primarily hydroelectric.

Michel Rauchs, an affiliate of the Cambridge Centre for Alternative Finance, told Insider it is difficult to come up with an accurate assessment of how "green" bitcoin is.

He said within China the renewable share of mining changes throughout the year due to "seasonal migration patterns" that see miners move towards hydroelectric plants during the wet season. "So it really depends at what point of time… you're looking at this," he said.

The Bank of America analysts argued bitcoin's energy consumption is only going to worsen due to the system's structure, which makes mining more difficult over time.

Colyer said Foundry is working on a number of ways to make mining greener. "We're focused on the newer technology, like immersion mining where the machines are actually put in a coolant and they don't use air cooling… We work with the flare gas guys that are chasing the flare gas emissions."

However, many investors are worried about how long it might take to make bitcoin green.

"But a rapid surge in adoption of bitcoin presents a major risk, and thus drives bitcoin's low environmental score."