One said after finding the “Bitcoin mine”: “It’s not what we were expecting. It had all the hallmarks of a cannabis cultivation.” West Midlands officers were tipped off about the farm because of the high usage of electricity thought to be powering lights and heat for the operation. A drone also detected abnormally high temperatures from the building.

The virtual currency mine was causing the surge and the officers seized 100 computers, used to earn Bitcoins for carrying out e-cash transactions. The electric supply had been bypassed at the building on Great Bridge industrial estate, Sandwell.

Bitcoin is a type of cryptocurrency made of a unique piece of software code and logged by records stored on computers.

It is virtually impossible to fake but users can make purchases without being identified. 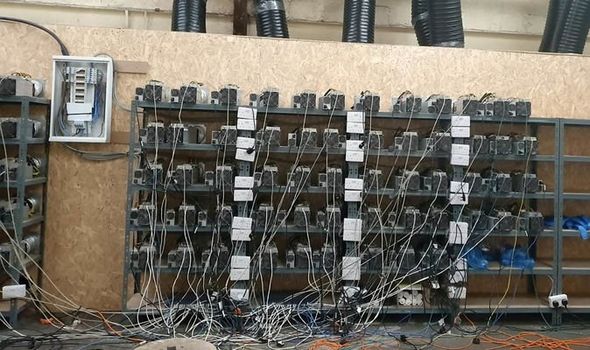 Tesla car chief executive Elon Musk had been one of Bitcoins biggest fans, ordering his company to buy £1billion of the currency in February.

But last week he backtracked on usage, saying he was concerned about the environmental impact of the enormous power consumption of the computers used to create Bitcoin worldwide.

Sandwell Police Sergeant Jennifer Griffin, said: “My understanding is mining for cryptocurrency is not illegal but abstracting electricity from the mains supply to power it, is.

“No arrests were made.” The search was part of a County Lines crackdown which led to 84 arrests.