Home » Colleges hope students get COVID-19 vaccines for fall semester – but can they require it?

After more than a year of online classes, regular coronavirus tests and mask mandates, most of the nation’s colleges are gearing up for what passes for a  normal return to campus in the fall.

The widespread availability of COVID-19 vaccines is making that possible, but colleges are likely to remain wary. Though nearly half of adult Americans are fully inoculated, only about 30% of 18- to 24-year-olds have reached that benchmark, according to data from the Centers for Disease Control and Prevention.

College students pose a high risk to efforts to control the pandemic. Last September, counties home to universities suffered many of the nation’s worst COVID-19 outbreaks. But colleges are determined to find ways to resume full, in-person courses. Students and professors struggled with online learning, and universities lost revenue tied to in-person costs such as dorms, meal plans and even athletics.

So some colleges will require students to provide proof they received COVID-19 vaccines. Here’s what you need to know about those requirements – and exceptions to them.

How many colleges will require a COVID-19 vaccine?

So far, about 400 or so colleges plan to require that students who wish to learn in-person receive the Johnson & Johnson, Moderna or Pfizer shots, according to a list compiled by the Chronicle of Higher Education.

Both public and private universities have issued coronavirus vaccine mandates for students, though state colleges in Republican-controlled states have been more likely to eschew such requirements. The American College Health Association, a trade group of college health care providers, recommended colleges require the vaccine for in-person  classes where “state law and available resources allow.”

Almost all of the nation’s 4,000 degree-granting colleges, however, are encouraging or helping their students to get their COVID-19 shots. The University of Florida has not issued a vaccine mandate, but has hosted a massive vaccination clinic that aimed to inoculate thousands of students daily. And some colleges are even offering incentives such as cash, university swag or tuition-free courses, according to Inside Higher Ed. 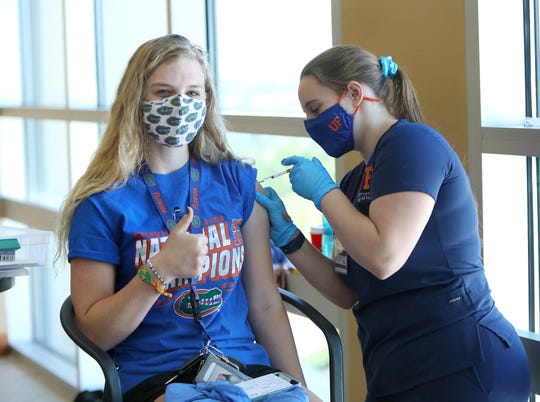 Wait, haven’t some states banned vaccine mandates? Does that apply to universities too?

In some cases, yes, but the scope of those restrictions vary from state to state. In Arizona, public universities are banned from mandating COVID-19 shots, though private institutions are not. Texas’ order bars any institution receiving public money from issuing a vaccine mandate, which would include some private universities. But even state-level restrictions may be more confusing than helpful.

The state of Indiana recently passed a law that prohibits the use of “vaccine passports.” Indiana University argued the law doesn’t apply to the university. The state’s attorney general disagreed. So far, the university is sticking by its vaccine requirement, even as conservative lawmakers continue to call on it to drop the mandate.

As a reminder: The federal government is not mandating COVID-19 shots.

Correct. Most universities require students to be inoculated against measles, meningitis and other diseases. Part of the controversy this time stems from the Food and Drug Administration’s OK of the COVID-19 vaccines via an emergency authorization order.

Some have argued this temporary authorization should prevent universities from requiring the shots. But coronavirus tests themselves were also approved via an emergency authorization order, and those have been in frequent use at campuses nationally.

Legal concerns aside, universities that require the shots are likely to experience pushback from anti-vaccine groups. Rutgers University in New Jersey was the first major institution to roll out a mandate, and it’s been the subject of protests and challenges. 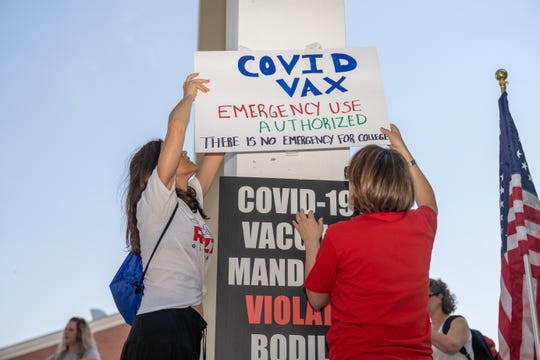 More than 300 people gathered outside Brower Commons on the Rutgers campus May 21 to fight against the university's fall COVID-19 vaccine mandate. (Photo: Alexander Lewis / MyCentralJersey)

So what happens when the FDA fully approves one of the vaccines?

I can’t be vaccinated because of my health or my religion. Will I or my child still be required to get the vaccine to attend class?

In some cases, students without vaccines may be barred from the campus. For example, Brown University is requiring students who refuse the shots and don’t qualify for a medical or religious exemption to continue studying remotely.

What’s this I hear about free tuition for college students who are vaccinated?

Thank Ohio Gov. Mike DeWine for that. In an effort to boost vaccination rates, Ohio created a lottery for people who receive COVID-19 shots. Adults can win $1 million dollars, but young people ages 12 to 17 could win a full-ride scholarship to a public college in the state.

Congrats, Joseph! You just won a full-ride college scholarship! If you’re between 12 and 17 years-old and had at least one dose of the vaccine, you could be next! Sign up at https://t.co/ZmJ8iKoSlV! pic.twitter.com/StHlWewhW5

Cuomo created a similar lottery in New York for 50 people between the ages of 12 through 17. The winnings will cover tuition and other costs at any college in the City University of New York or State University of New York systems. (The incentive, however, presumes the young people want to attend an in-state college, or that they’ll be accepted into the college of their choice, or that they want to attend college at all.) Similar incentives have been adopted in Colorado, Delaware and Oregon.

Must faculty and staff be vaccinated?

Mandates vary at individual campuses, but many vaccine requirements have focused on students. The thinking goes that students are less likely to seek out the shots on their own. Students also tend to be more social or live in crowded spaces, which means they have a higher potential to spread the virus.

What’s more, it’s easier for universities to mandate shots for their students than their employees. And while some companies have started rolling out vaccine mandates, universities generally haven’t been among them.

So what should I do if I want to attend (or avoid) a university with vaccine mandates?

Check with the university directly and often. At the end of March, fewer than a dozen universities had vaccine mandates in place. Now, hundreds have adopted these types of rules.

The university should also be able to answer more specific questions about the type of vaccine they’ll require. Some, for example, are accepting vaccines approved in other countries, while others are only accepting FDA-authorized shots.