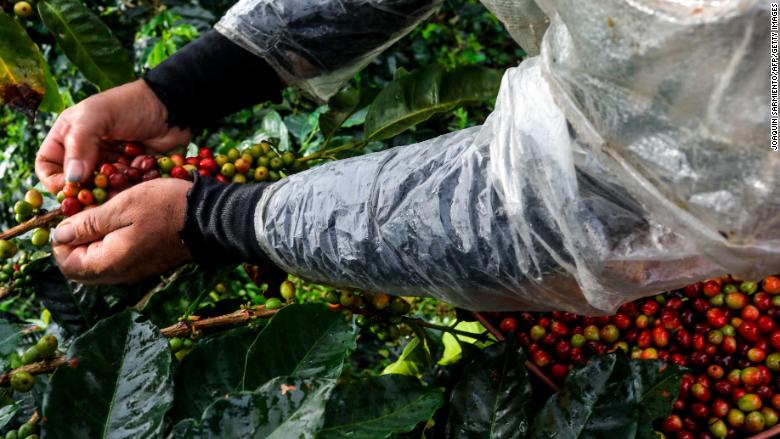 A decade later, it’s about to harvest its biggest ever crop.

Colombia managed to turn things around with significant government intervention, research into the disease and by planting varieties resistant to the fungus.

The battle, however, is not over.

Coffee rust — or la roya as it’s called in Latin America — is a persistent problem, exacerbated by climate change. It’s making coffee more and more expensive, while at the same time making it harder and harder for coffee producers to earn a living.

When the orange-hued spores appear on a tree, that tree sheds its leaves and stops producing coffee cherries. Just like that, the disease can devastate a country’s coffee industry.

It happened across Central America in 2012, and traditional coffee producing countries like Guatemala still haven’t recovered.

Honduras, now the world’s third largest coffee producer, did bounce back. Experts say its because the Honduran government followed the Colombia model.

Both countries fund a central coffee authority. Others that don’t, like El Salvador, which mostly left farmers to self-organize, haven’t bounced back from the devastation. Unlike Honduras and Colombia, El Salvador’s central authority is disorganized and ineffective.

Colombia’s National Coffee Federation (the FNC) was ready in 2008 to give growers seeds from a brand-new variety of rust-resistant coffee to replant trees immediately. In the past few years, 45% of the 940,000 hectares of coffee farms in Colombia has been replanted with rust-resistant varieties, according to the Foreign Agricultural Service.

The FNC also provided technical support to growers. The technicians, known as “yellow shirts” for their uniforms, personally visit farmers to advise them on correct fungicidal application and other best practices.

And in a partnership with state-run banks, the FNC offers financial assistance for growers in the form of loans to fund improved farming techniques. These seven-year loans are designed to come due after the plants start producing.

Like Colombia, Honduras has managed to thrive in recent years because of its central coffee authority, IHCAFE, which organizes loan programs and technical assistance for farmers.

The IHCAFE was able to pinpoint that the Lempira variety, common in Honduras, was susceptible to rust. The group was therefore able to research and breed alternatives.

And because Honduras’ coffee industry is relatively young and the farms are smaller, it’s cheaper to replace trees and easier to bounce back, said Jan von Enden, managing director at Hanns R. Neumann Stiftung, a foundation that works to provide tools and programs to help local coffee growers.

But even with robust support operations like FNC and IHCAFE, coffee rust is still a major problem.

Rust continues to defy research, mutating and appearing on varieties that were previously resistant. Even well-prepared Honduras can’t escape this reality.

“It’s a bit of an arms race,” said Neuschwander.

For instance, it was previously believed that rust was avoidable in higher altitudes, where it’s colder. But temperatures are rising higher up, developing more beneficial conditions for the spreading of rust spores.

“We don’t know if the resistance will last for a long time,” said von Enden. “Rust evolves, so we have to keep on breeding new varieties to keep the resistance up.”