New York (CNN Business)The auto industry has a saying: You can’t build a car with 99% of the parts. But the computer chip shortage is proving that adage wrong.

Ford (F) will begin shipping Explorer SUVs without all of its chips to address the tight inventory of vehicles available for sale at dealerships.
The automaker disclosed this weekend that it would build Explorers without rear-seat controls for the air conditioner and heat. The driver and front-seat passenger will still be able to adjust climate controls for backseat passengers — but people in the back won’t be able to change the temperature themselves.

“We’re doing this as a way to get our customers their vehicles sooner,” said Ford spokesperson Said Deep.

He said Ford had already offered buyers of its best-selling F-150 pickup a choice: They could give up a fuel-saving feature called “start-stop” and get a $50 credit — or they could wait for the truck to be built with the feature. Start-stop automatically turns the engine off when the truck comes to a complete stop, and restarts it when the driver takes his or her foot off the brake.

The start-stop option is only available at the time an F-150 is built, and cannot be added after the fact. But Deep said Ford will be able to install the rear-seat climate control feature on Explorers shipped without the feature once the chips become available. It will be added at dealerships at no cost to the owners.
Virtually all automakers have been forced to temporarily shut production at some of their factories over the last year and a half due to the lack of computer chips and, in some cases, other parts. The reduced inventories of new vehicles for sale have lifted car prices to record levels — a major factor in America’s highest rate of inflation in nearly 40 years. 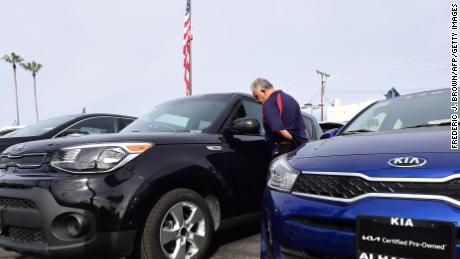 Ford is not the only automaker shipping vehicles without all the features they were designed to include.

Last year General Motors was forced to temporarily stop offering several features, including a fuel management module designed to improve mileage in the Chevrolet Silverado and GMC Sierra pickups by about one mile per gallon. GM also stopped offering a stop-start feature on some of its heavy-duty pickups.
GM also had to exclude some comfort features, such as heated and cooled seats in a variety of models, the adjustable lumbar support in the Cadillac XT4, as well as parking assist features. But GM (GM) also expects it will be able to offer a free retrofit for those features once the chips become available.
Source: Read Full Article