Home » Business » Concrete could get stronger as it helps ocean life

Hong Kong (CNN Business)Rising sea levels are boosting the need for flood defenses. But the main material used in many man-made barriers is concrete, which can inflict its own huge cost on the climate and sea life.

In a bid to make shoreline construction more sustainable, an Israeli startup called ECOncrete has come up with a range of products that can reduce the carbon footprint of concrete and attract marine life.
Concrete-based structures on coastlines certainly have benefits — with structures like sea walls, breakwaters and ports shoring up human habitats. But most marine species live near the coast too, and these man-made structures can damage the ecosystems these sea creatures depend on.

“Seventy percent of coastal structures worldwide are concrete based,” Ido Sella, co-founder and CEO of ECOncrete, told CNN Business. Concrete can leach chemicals that turn the surrounding water more alkaline, making it hard for some marine species to survive, until the ph level of the seawater eventually returns to neutral. And the smooth, straight surfaces of structures like sea walls make it difficult for sealife like algae, oysters and barnacles to latch on.

Sella’s nine-year-old company makes additives that can be mixed with concrete to help it match the chemical balance of seawater. It also manufactures blocks and panels for sea defenses that mimic the shape and texture of rock formations that lie at sea level; tiny crevices on their surface give larvae a place to settle and develop, while ridged sides and shallow pockets retain water like a tide pool.

The company’s products have been installed in over 35 locations around the world over the last eight years, including in New York City, Rotterdam and Monaco. Sella, who is a marine ecologist, said that the products can more than double the amount of biodiversity, compared to traditional concrete.
This allows the “next generation” of organisms to develop on the surface and attracts other marine life, Sella added, kickstarting a self-sustaining ecosystem. 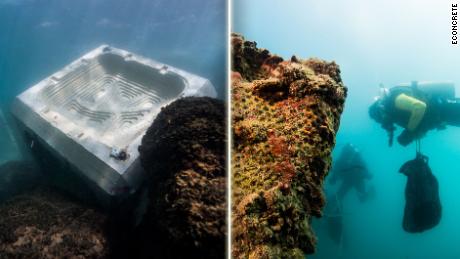 Apart from harming ocean life, cement — the material that binds the concrete mix together — is responsible for up to 8% of the world’s carbon emissions, according to think tank Chatham House.
ECOncrete says its additives lower the amount of cement needed in the concrete mix, reducing its carbon footprint.
But some ecologists warn that man-made structures cannot replicate the full ecological benefits of natural shorelines. Beth Strain, a researcher at the University of Tasmania who has trialed ECOncrete products, has studied the impact of different eco-engineering approaches on coastal biodiversity. 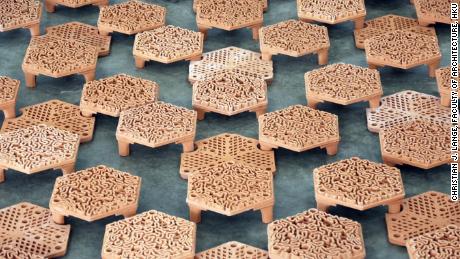 “Wherever possible, you should try to avoid building more artificial structures,” Strain said.
In situations where coastlines need more fortified barriers, she recommended a “hybrid” approach, incorporating both eco-friendly infrastructure and natural buffers against wave power, like mangrove forests or oyster reefs.
“There’s quite a bit of evidence to suggest that they work just as effectively under some conditions as artificial structures by themselves,” Strain said. “They’re also a lot more cost effective.”
However, Strain added that nature-based solutions require a lot of space and can take years to mature.

In densely-populated coastal cities surrounded by sea, ECOncrete’s technology is an attractive eco-engineering solution, according to Kenneth Leung, a Hong Kong University professor of water ecology.
In 2018, Leung’s team installed ECOncrete’s tide pools, armor blocks and sea wall panels on sites on Hong Kong’s coast, as part of a government-funded trial to boost biodiversity on artificial shorelines.
“So far, we’ve had very positive results,” Leung said, adding that in a region vulnerable to strong waves and flooding, concrete alternatives must be durable enough to meet safety regulations and last “20 or 30 years at least.” 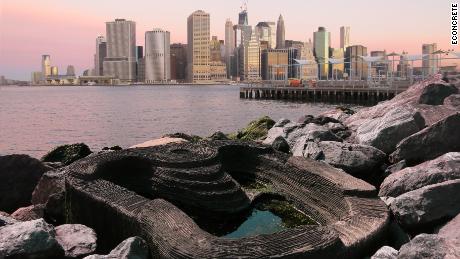 Sella, who is based in Tel Aviv, said that organisms living on the surface of ECOncrete can make the structures stronger over time. As they settle on the surface, they encase the concrete in a layer of calcium carbonate, one of the main components of seashells, which stops the concrete from cracking, and can increase its tensile strength tenfold, according to Sella.
Although the material is up to 15% more expensive than standard concrete, Sella said this “bio-protection” saves developers money in the long run, as infrastructure requires less maintenance.

ECOncrete — which raised $5 million in funding last year, including from impact investment fund Bridges Israel and Barclays — produces its products in Israel, Europe and the United States, but Sella plans to open more manufacturing facilities around the world, and double his 39-person team in the next six months. Sella expects demand to rise, as developers look for ways to ways to protect shorelines from increasingly regular extreme weather events.
“Taking into account that we’re now in an era of a shifting climate with predictions of rising sea levels and increased storminess, we need to armor our shoreline in a better way,” Sella said. “We need to keep those resources available for the next generation.”
Source: Read Full Article