Royal Mail says it has kept on 10,000 of the temporary staff it hired in the run-up to Christmas as it gets to grips with surging parcel deliveries demanded during the coronavirus pandemic.

The company said it handled a record 496 million packages in the three months to the end of December – hitting 11.7 million per day in the peak festive season which resulted in delays to deliveries.

While announcing improved profit expectations for its financial year to March as a result of the boost to its business, Royal Mail chairman Keith Williams admitted the company had let some customers down. 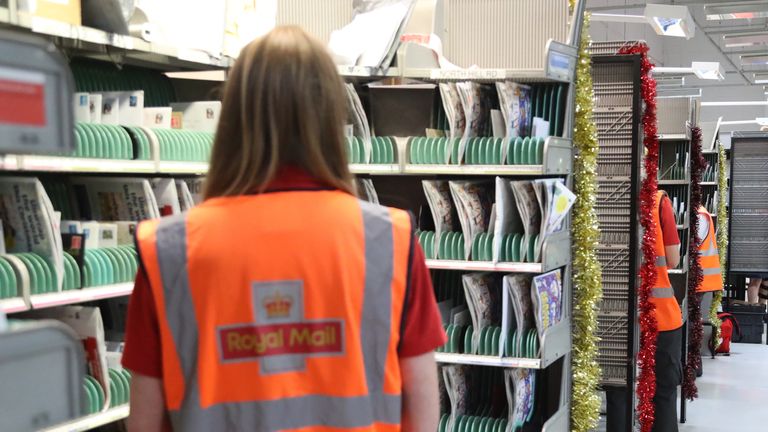 “Given these record volumes, we recognise that at times our service during the period was not always as we would have wished.

“But, thanks to the efforts of our team, the retention of around 10,000 of the 33,000 flexible workers from the Christmas peak, and the introduction of new processes, we have been making encouraging progress.”

He said Royal Mail was “resolutely focused on delivering a comprehensive service” despite the challenges still being posed by the COVID-19 crisis that saw demand for parcel deliveries surge as many were forced to cancel Christmas plans with loved ones because of tightening coronavirus restrictions.

The company had already profited from a surge in online shopping throughout the pandemic.

Royal Mail said it now expected to report operating profits “well in excess” of £500m for its financial year following a 14% spike in comparable revenue over the first nine months.

Analysts had expected a profit figure just above £400m.

Shares rose by almost 12% initially to their highest level since October 2018 but later settled 5% higher.

Neil Wilson, chief market analyst at Markets.com, said of the figures: “Royal Mail raised its profit guidance due to a surge in parcel deliveries, with volumes up 30% year on year.

“The company for long in the doldrums finally seems to be getting its house in order and is now a structural winner both from the pandemic and from a decade-long shift towards online shopping.