For the first time since December 2020, California’s 7-day Covid test positivity rate is on the rise. The test positivity rate, which hit a pandemic-era low of 0.7% on June 5, has risen slowly but steadily over the past two-and-a-half weeks to 1.1% on Wednesday. It’s the first sustained rise in that key Covid-19 indicator since the worst of California’s pandemic in January — and its happening just as the state lifts most Covid-19 restrictions.

That same 7-day Covid test positivity rate has also risen over roughly the same period in the state’s most populous county, Los Angeles. L.A. bottomed out most recently in early June at just above 0.4%. On Wednesday, the county’s test positivity rate had grown to 0.8%. (See chart below — which does not include the last week of data.) 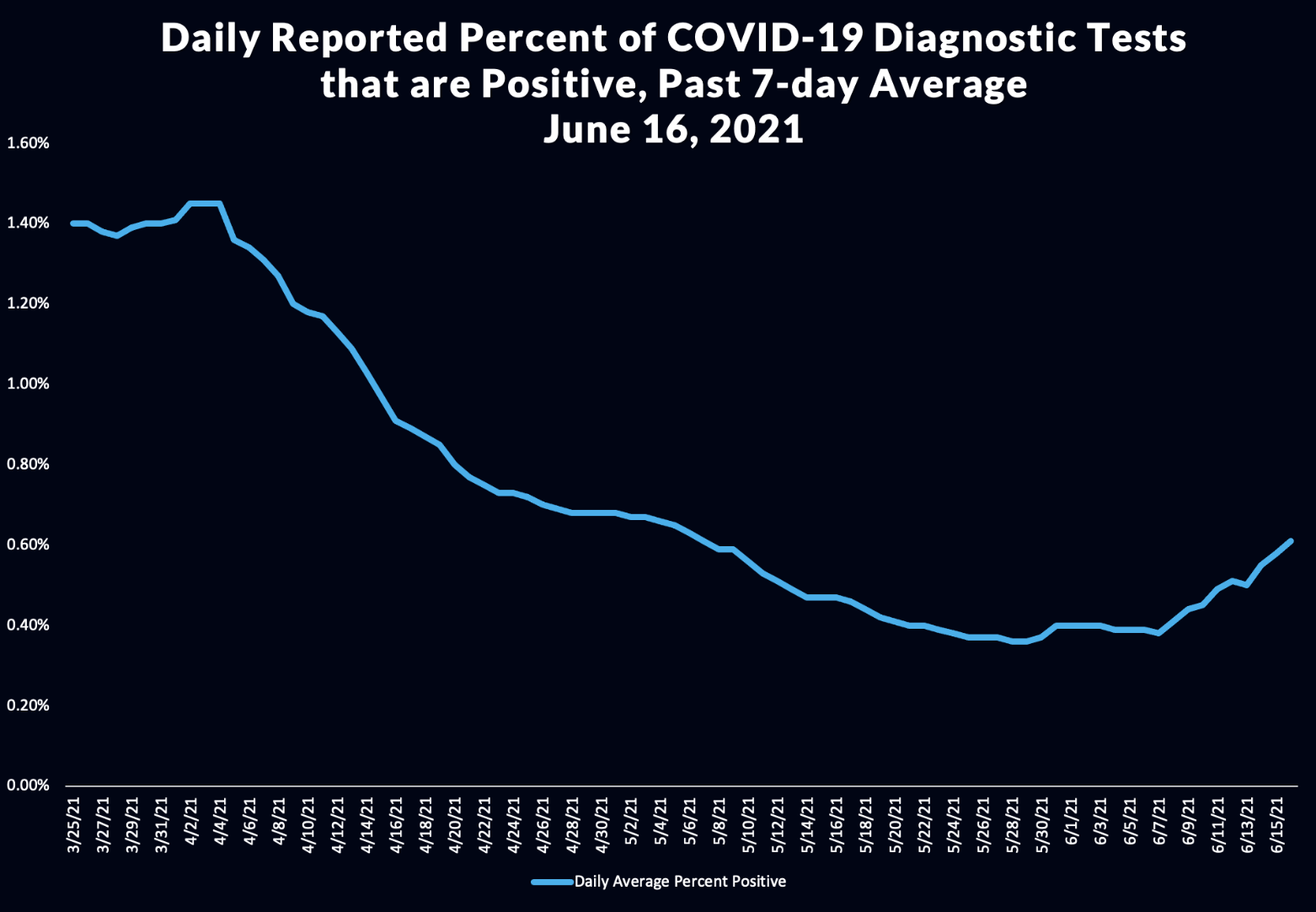 The test positivity rate is, as the name indicates, a measure of how prevalent new infections are. It is calculated as the number of positive tests divided by the total number of tests performed. Averaging the rate over a week’s time helps eliminate data hiccups, and because the stat is relative to the number of tests, it is not influenced by peaks and valleys in the raw numbers of tests administered.

That’s important, given the number of tests administered in the state has been declining and is now lower than at any time in the past year. Fewer tests can mean fewer cases identified and provide an incomplete view of a pandemic. Test positivity is a more accurate measure of the rise and fall of cases.

The rise in test positivity is admittedly small, but it is concerning when considered alongside data indicating a steepening rise in the highly-infectious Delta variant of Covid-19 in the state.

In the same week that Gov. Gavin Newsom dropped Covid restrictions across the state, Delta increased about 40%. The state last week also declared Delta a “variant of concern” for the first time.

The strain had previously barely registered on the weekly count of variants posted by the CA Department of Public Health. But on Thursday, the number of cases related to Delta and related variants discovered in the state rose from 286 to 399. That’s about a 40% rise week-over-week.

The CDC announced earlier this week that the percentage of U.S. Covid infections accounted for by Delta has doubled every two weeks to 20% on Tuesday.

As of last week, 64 cases of the Delta had been detected in L.A. County, with the numbers growing steadily since late April. Ferrer is scheduled to release updated numbers on Thursday, and she expects a “significant increase.”

“Because we, like all other places in the United States and in fact other places in the world where they’re seeing the Delta variant, it does in fact proliferate very quickly,” she told the board. “It is the most infectious variant that has been identified to date here in California, and that means that for those people who are unvaccinated it is going to pose a big risk because it spreads so easily.”

According to numbers released Monday, the county has officially surpassed 10 million doses of Covid vaccine administered, with 58% of the population aged 16 and over considered fully vaccinated, and 67% of the 16+ population at least partially vaccinated. State numbers are roughly comparable, which is important given that the Pfizer shots, at least, are thought to be 88% effective against the Delta variant. That makes the population most vulnerable as a whole kids under 12 who are not yet eligible for vaccination.