Good Wednesday. (Want this by email? Sign up here.)

The Fed chairman said yesterday that the central bank was prepared to act to sustain the economic expansion if President Trump’s trade disputes weakened the economy, Jeanna Smialek and Matt Phillips of the NYT write.

“We do not know how or when these issues will be resolved,” Mr. Powell said of the trade disputes. “We are closely monitoring the implications of these developments for the U.S. economic outlook and, as always, we will act as appropriate to sustain the expansion.”

He did not say explicitly that the Fed would cut rates. “But his comments sent a signal that the central bank was watching Mr. Trump’s trade wars warily, ready to fend off any economic damage,” Ms. Smialek and Mr. Phillips write. Futures markets for Fed funds now place a probability of more than 60 percent on a cut in interest rates at the Fed meeting at the end of July.

Wall Street celebrated. Markets posted big gains after his statement. The S&P 500 rose 2.1 percent, its second-best daily gain of 2019. The rally was broad, with tech companies, financial firms and industrial producers all seeing gains. The rebound even coaxed some investors from the safety of government bonds.

Don’t get too carried away. Mr. Powell “never once uttered the phrase ‘rate cut’ as it pertained to current policy,” Brian Chappatta of Bloomberg Opinion writes, adding that “it will take a flurry of clearly weak data points to truly motivate the Fed to drop interest rates.”

Republicans push back on the Mexico tariff threat

Senate Republicans told White House officials that they were ready to challenge President Trump if he imposes tariffs on Mexican goods as part of an immigration crackdown.

Mr. Trump has vowed to move ahead with the levies, which would start next week at 5 percent on all goods imported from Mexico and rise to as much as 25 percent until the Mexican government stops the flow of migrants.

Senators were mindful of the stakes. “There’s no reason for Texas farmers and ranchers and manufacturers and small businesses to pay the price of massive new taxes,” Senator Ted Cruz of Texas said. Senator John Cornyn, also of Texas, added, “We’re holding a gun to our own heads.”

Some lawmakers hoped for compromise. Mexican diplomats met with their American counterparts in Washington yesterday.

If those efforts fail, Congress would have to vote to disapprove the national emergency order through which Mr. Trump would impose the tariffs. But such a resolution would inevitably face a presidential veto, meaning both the House and the Senate would have to muster a two-thirds majority to defeat Mr. Trump.

Mr. Trump threw down the gauntlet: “It’s foolish,” he said of the potential insurrection.

More: Mr. Trump’s offer of a potential trade deal with Britain drew skepticism in London. He had to walk back a demand that Britain open up its national health care system to U.S. companies. And the World Bank lowered its global economic forecasts because of the trade fights. 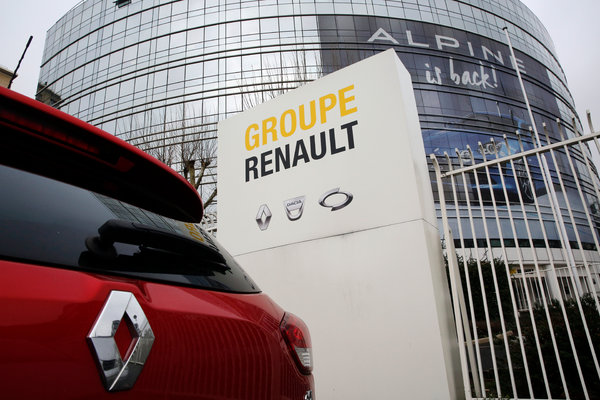 Renault’s board could soon approve its Fiat merger

The French carmaker’s directors could vote today on a proposed union with Fiat Chrysler.

Renault’s board met yesterday to discuss the proposal, which would create a new global auto giant. They said they needed more time to decide whether the deal should go ahead.

Lawyers have been finalizing terms of the transaction, the WSJ reported, citing unnamed sources.

Among the issues reportedly being hashed out:

• Clauses that ensure neither company gains too much power over the other.

• Whether the French government, which owns a 15 percent stake in Renault, would get a veto on future C.E.O. appointments.

There’s potential for further opposition to the deal. The French activist investor CIAM, which owns a stake in Renault, called the merger an “opportunistic takeover” by Fiat. And Nissan — which is already in an alliance with Renault — remains publicly noncommittal to the transaction, raising questions about what demands it will make.

A lawsuit could test the S.E.C.’s crypto policies

The S.E.C. yesterday sued Kik Interactive, a social media company, over its initial coin offering in 2017, saying that it was unlawful because it had not been registered with the government, Matthew Goldstein of the NYT writes.

• Kik sold $100 million worth of digital “coins” called Kin, and argued that because its tokens were neither stocks nor bonds they weren’t covered by federal securities law.

• But the S.E.C. has said that token offerings “need to be registered with the government in order to provide investors with the appropriate disclosures about the investment’s risks.”

• The S.E.C. complaint also “noted that at the time of the Kik offering, Kin could not be used to purchase anything.”

The outcome “could help determine the S.E.C.’s authority to regulate aspects of the cryptocurrency industry, which has expanded far beyond the digital currency Bitcoin,” Mr. Goldstein writes.

Apple is being sued over its App Store

Developers sued Apple yesterday over what they say is “improper monopolization” of the market for iOS apps, Reuters reports.

The plaintiffs argue that Apple stifles innovation and limits in-app purchases by strictly controlling the App Store. The developers also objected to the 30 percent cut that Apple takes from most App Store transactions, as well as other rules.

“Apple blatantly abuses its market power to the detriment of developers, who are forced to use the only platform available to them to sell their iOS app,” said Steve Berman, the lawyer representing the developers. “In a competitive landscape, this simply would not happen.”

The lawsuit follows a Supreme Court decision, which said that consumers should be allowed to try to prove that the technology giant had used monopoly power to raise the prices of iPhone apps.

The bigger picture: The Justice Department is now reportedly tasked with investigating possible antitrust issues with Apple, and the App Store is likely to be a prime focus for any such inquiry.

Both Joe Biden and Senator Elizabeth Warren have introduced sweeping, expensive plans to help reverse climate change. They show how far the 2020 Democratic field has moved on environmental issues, Coral Davenport and Katie Glueck of the NYT report.

• Mr. Biden proposed $1.7 billion in federal spending over 10 years on clean energy and some form of a carbon tax. (It would be paid for in part by rolling back President Trump’s corporate tax cuts.) Mr. Biden would also look to block new permits for oil drilling on public lands.

• Ms. Warren would spend $2 trillion over the next decade to create the National Institutes of Clean Energy and push federal spending toward American-made renewables.

Both pitched their plans in economic terms, arguing that their proposals would help revive American manufacturing.

The announcements follow pledges by Gov. Jay Inslee of Washington, whose entire campaign is centered on fighting climate change, and Beto O’Rourke, who has proposed spending $1.5 trillion.

But enacting such plans might be difficult. “There needs to be a sea change in Congress” for these to become law, Richard Newell, the president of the nonpartisan research organization Resources for the Future, told the NYT.

More: The Trump administration argued that a lawsuit that would compel the federal government to act on climate change should be tossed because “there is no fundamental constitutional right to a ‘stable climate system.’”

More than 100 million women around the world could be forced to find new jobs by 2030 because of automation, according to a new study by the McKinsey Global Institute, Eric Morath of the WSJ reports.

• “The study looked at 10 of the world’s largest economies, including the U.S., China and India, and found that 107 million jobs held by women are at risk of being displaced by automation, or 20 percent overall of female employment.”

• “Service workers, including those employed in retail and food service, are also susceptible to automation, and include women in high numbers.”

• “In developed countries, a larger share of jobs are on the line. In the U.S., 24 percent of female jobs and 26 percent of male jobs are at risk to automation, McKinsey said.”

• “The McKinsey study isn’t projecting mass job loss due to automation. It forecasts that 171 million new jobs held by women will be created by 2030 — and the rate of job growth could be slightly larger for women than for men over that time period.”

The chief operating officer of Deutsche Bank’s U.S. arm, Kate Clifford, has reportedly quit after a year in the role.

Sanjay Thakkar, a KPMG partner accused of bullying, has stepped down as the head of the consultancy’s advisory unit and taken a leave of absence from the firm.

Workers at the hedge fund D.E. Shaw have until September to sign noncompete agreements or risk being fired.

• The C.E.O. of Bank of America warned of potential “carnage” in risky leveraged loans — an area in which the bank is a leader. (Bloomberg)

• T-Mobile is working with Goldman Sachs on the potential sale of assets to win antitrust approval for its deal with Sprint. (Bloomberg)

• The I.P.O. of Volkswagen’s truck unit could prompt the automaker to sell more assets, including its Ducati motorcycle division. (Bloomberg)

• Flytek, a Chinese artificial intelligence company, reportedly plans to raise up to $350 million for a new fund to invest in A.I. start-ups. (FT)

• The House voted last night to give a path to citizenship for the young undocumented migrants known as Dreamers. It’s unlikely to pass the Senate. (NYT)

• Senator Bernie Sanders plans to propose at Walmart’s annual shareholder meeting that the retailer raise its minimum wage to $15 an hour. (Reuters)

• House Democrats said that the White House had prevented Hope Hicks from complying with a congressional subpoena for documents related to Robert Mueller’s investigation. (WSJ)

• “Does the U.S. need a cabinet-level Department of Cybersecurity?” (WSJ)

• President Trump said that the U.S. and Britain would be able to find common ground on the use of Huawei hardware. (Bloomberg)

• “China advised its citizens to reconsider visiting or studying in the U.S.” (WSJ)

• 11,000 people who prepare your airline food are considering a strike. (NYT)

• JPMorgan Chase is trying to prevent class-action lawsuits by its credit-card customers, by reintroducing provisions dropped a decade ago. (NYT)

• PwC plans to split up its audit practice following criticism over its standards. (FT)

• Despite its huge debt, Japan remains an economic powerhouse. Some say it provides a model for the U.S. (NYT)

• Here’s a look at the couple that scammed Berkshire Hathaway for millions of dollars. (Bloomberg)

Thanks for reading! We’ll see you tomorrow.