Tired of working on the kitchen table or juggling conference calls and family life, and with no return to their desks in sight, many of the country’s office workers are seeking out alternative workplaces – from hotel rooms and cocktail bars to fitness clubs – for a change of scene.

Businesses are hoping that the offer of a desk, reliable wifi and refreshments will attract workers weary of half a year of working from home, while boosting their income in challenging times.

On a wet weekday morning, Edmund Weil has bagged a cosy corner table at Swift Shoreditch, a cocktail bar in the hip east London district. But he’s there for a business meeting rather than the drinks.

“Everyone has seen a lot of home,” Weil said. “Lots of people who don’t have a home office are at the stage where if you have to choose between a face-to-face meeting and Zoom, they choose face to face.”

The father of three children, including a four-month-old baby, Weil has been looking for places to work where there are fewer distractions.

As a bar owner, he is more used than most to spending daylight hours in venues dedicated to night-time socialising, but he is part of a growing number of workers finding temporary desks in different locations. 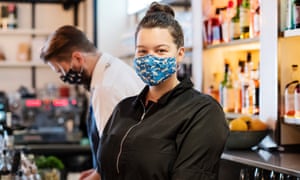 Coral Anderson, the general manager of Swift Shoreditch, said the 10pm curfew has hurt trade at bars which usually made most of their income in late-night trading.

Swift Shoreditch has signed up to a “work from bars” initiative created by Fraser Campbell, ambassador for whisky brand Dewar’s. Its intention is to highlight venues that are now welcoming workers, while bringing new customers to businesses struggling with reduced trade and government regulations.

“Bars have changed their opening hours to open at 12 o’clock, they have started doing food, they have amazing wifi, and tables with distance between them,” Campbell said.

Campbell’s online map of 150 venues across the UK, from London to Aberdeen, has been visited almost 20,000 times in the four weeks since launch.

The number of British workers travelling to work has been falling since early October, according to official figures, and a quarter of workers are still working exclusively from home. 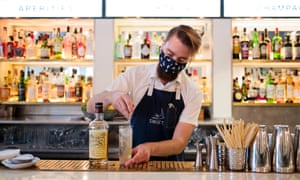 Following the government’s U-turn over the return to the office in September, some of the country’s largest hotel chains have begun offer daytime room rentals to workers in search of peace and quiet, as the firms grapple with a lack of international tourists and slump in business travel.

Hilton has launched day rentals across the majority of its more than 160 UK hotels, from one of its most luxurious hotels, the Conrad London St James, which costs from £150 a day, to £44.85 a day for a room in York’s Hampton by Hilton.

Meanwhile European hotel group Accor, owner of brands including Novotel and Ibis, has launched a similar offering at about 220 locations from Brighton to Edinburgh.

Hilton offers rooms with a desk and chair, facilities to make hot drinks, as well as room service and wifi, and use of the gym or swimming pool, with a promise of high levels of hygiene.

“Hotels are having to be creative,” said John Rogers, head of brands and franchise operations for Europe, the Middle East and Africa at Hilton. “Where historically there would have been large volumes midweek of corporate business, clearly those volumes are lower.”

Beyond hotels, the David Lloyd fitness club chain has reported a 40% surge in online inquiries for corporate memberships, which it attributes to employers wanting to provide staff with gym access and a workplace.

Growing demand for one-day desk rentals has sparked a change at flexible workspace provider Fora, which previously rented out offices for a minimum of one month.

Fora, with 11 buildings across London and Reading and plans for more, now offers a day pass at aq cost of £40 a day in the capital and £25 in Reading.

“People aren’t certain how much office space they need right now and how often they want to go into work,” said Enrico Sanna, the chief executive of Fora, who is himself working from the stylishly designed building on Broadwick Street in Soho.

“There is a hardcore of people who don’t want to be at home. These are people who can do it for three months, but not past that, as it’s not the right setup mentally or physically.” 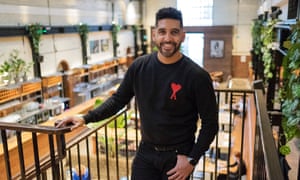 Opening a new business during a recession is for the brave, but Dominic Cools-Lartigue jumped at the chance to open a restaurant, gallery and co-working venue in Shoreditch.

The building, which now houses the Tramshed Project, once an East End tram generator, became available after its former occupier, a fine dining restaurant, collapsed into administration in April.

When the Guardian visited just days after its reopening, around half of the well-spaced tables in the 1,860 sq metre (20,000 sq ft) building were occupied by laptop users.

Laurent Louvrier, chief executive of the artificial intelligence firm SuccessData, had booked one of Tramshed’s booths for a brainstorming day with three of his 11 staff.

The startup terminated its lease in a building run by flexible office provider WeWork during lockdown, saving a “not negligible” amount of money. Instead, small groups from SuccessData meet once a week at venues such as the Tramshed Project, where a four-person booth requires a minimum daily spend of £30 on food and drink. “This is all we need at the moment,” said Louvier.

“Just opening this vast space as a restaurant right now wouldn’t be viable,” said Cools-Lartigue. “The co-working will help the with the evening restaurant bookings. Hopefully one will feed the other.”