Russia’s $1.5 trillion economy is the world’s 11th biggest, according to World Bank data. A week ago, it was doing a bumper trade in energy, exporting millions of barrels of crude a day with help from major oil companies. Western brands were doing brisk business in Russia, and investors were lending to its companies.
Now, a barrage of sanctions have made Russia’s biggest banks radioactive, traders are shunning barrels of Urals crude oil, and Western companies are fleeing the country or shutting up shop. Russian stocks have been kicked out of global indexes, and trade in some Russian companies has been halted in New York and London.

Russian President Vladimir Putin’s invasion of Ukraine has been met with an unprecedented response from the United States, the United Kingdom, the European Union, Canada, Japan, Australia and other countries. Even Switzerland, famous for its neutrality and banking secrecy, has pledged to impose sanctions on Russia.

Sanctions announced over the past week have cut off Russia’s two largest banks, Sberbank and VTB, from dealing in US dollars. The West has also removed seven Russian banks — including VTB — from SWIFT, a global messaging service that connects financial institutions and facilitates rapid and secure payments.
The coalition is trying to prevent Russia’s central bank from selling dollars and other foreign currencies to defend the ruble and its economy. In total, nearly $1 trillion worth of Russian assets have now been frozen by sanctions, according to French finance minster Bruno Le Maire.
“Western democracies have surprised many by pursuing a strategy of exerting intense economic pressure on Russia through effectively cutting it off from global financial markets,” Oliver Allen, markets economist at Capital Economics, said in a research note.
“If Russia continues on its current path, it is quite easy to see how the latest sanctions could be just the first steps in a severe and enduring severing of Russia’s financial and economic ties with the rest of the world.” 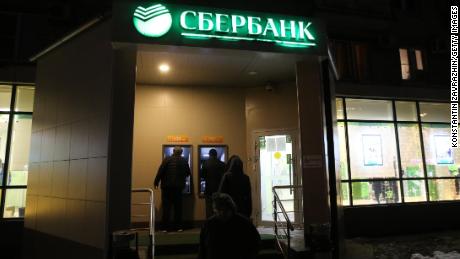 Russia’s economy matters to the rest of the world because of its vast energy resources.
The country’s oil and gas exports haven’t been directly targeted by Western governments, but that hasn’t stopped prices from skyrocketing in recent days. Russian crude oil, however, is trading at its biggest discount in more than 30 years.
Moscow is finding it harder to sell shipments to foreign buyers worried about being caught in the fallout from financial sanctions. Tanker operators are wary of the risk to ships in the Black Sea, and major global oil companies are ditching operations in the country.
Brent crude futures, the global benchmark, have increased by roughly 20% since the start of the invasion to trade near $115 per barrel. US oil futures have risen to the highest level since 2008. In Europe, the price of wholesale natural gas spiked to a record high on Wednesday, more than double where it stood last Friday.

The huge price increases will make fuel more expensive around the world, hiking the cost of travel and commuting. They will also add to inflation and could act as a drag on economic growth, reigniting fears of stagflation and complicating decisions by global central banks as they try to counteract rising prices.

Other commodities are climbing too

The crisis is also adding pressure to already stretched global supply chains. Ukraine and Russia together are responsible for about 14% of global wheat production, and they supply 29% of all wheat exports. Wheat futures have spiked, making the commodity more expensive for food makers, who will likely pass those costs on to consumers.
Palm oil prices have also shot up as markets scramble to find alternatives to shipments of sunflower oil stuck in Black Sea ports.
And it could get worse. In a scenario where fighting in Ukraine lasts well into 2023 and Russia cuts off the supply of natural gas to Europe for six months in retaliation for additional sanctions, eurozone inflation peaks above 7% in the third quarter of this year, according to Oxford Economics. UK inflation would exceed 10%.
Russia would bear most of the economic pain. In the scenario outlined by Oxford Economics, Russia’s economic output in 2023 would be 7% below levels it would have reached without an invasion. Global growth that year would be reduced by 1.1 percentage points, according to the research firm.

Russia’s energy riches haven’t been directly targeted by Western sanctions, but many of the world’s biggest oil companies are quitting the country or halting new investments in projects to explore and develop fields.
ExxonMobil said Tuesday that it was exiting its last project in the country, Sakhalin-1 — which was billed as “one of the largest single international direct investments in Russia.” An Exxon subsidiary was the project’s operator, and the company’s decision to walk away will end its presence of more than 25 years in Russia.
BP, Shell and Norway’s Equinor have all said this week they intend to exit their Russian businesses at a likely hit of billions of dollars to their balance sheets. France’s TotalEnergies has halted new investments.

The corporate exodus has accelerated in recent days and reached just about every sector of the economy. Tech giants, carmakers, retailers and airlines have all suspended operations in Russia.
Container shipping lines have dramatically curtailed their services. Western banks are trying to figure out how exposed they are to Russia’s tottering financial system. Visa and Mastercard no longer work in Russia. Boeing and Airbus won’t service the Russian fleet.
Source: Read Full Article