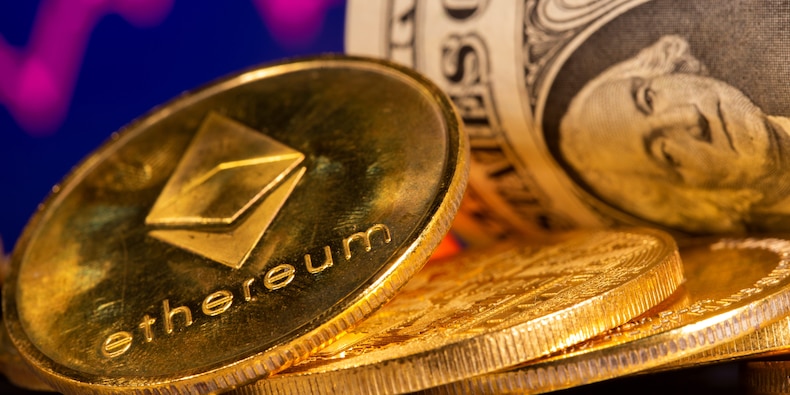 Ether spiked as much as 8% on Tuesday to a new record high ahead of Coinbase's direct listing and Berlin hard fork, the next upcoming upgrade to the ethereum network, both happening on April 14.

Ether rose to a record high of $2,287, hitting a market capitalization of $250 billion for the first time. The world's second-largest cryptocurrency has surged 205% year-to-date amid a broader cryptocurrency rally led by bitcoin.

"Ether is surging because it is relatively undervalued compared to bitcoin," said Ian Balina, founder and CEO of Token Metrics, a data-driven investment research platform for cryptocurrencies. "Factoring in Coinbase's $100 billion [valuation] that will bring new users to the crypto space, and ethereum being the only other crypto asset with CME futures contracts for institutions, one can see why Ethereum is surging."

Bitcoin on Tuesday jumped to an all-time high above $63,000 on excitement ahead of Coinbase's Nasdaq listing. Cryptocurrency bulls view this as a milestone for the digital currency ecosystem.

"Coinbase direct listing is good to bring mainstream attention to crypto companies," Kosala Hemachandra, founder and CEO of ethereum wallet MEW. "However, it'll be really interesting to see where they will be headed from now on. Can they pave the way so Coinbase stocks are actually tradable on Ethereum? I think that's the way to prove how powerful blockchain can be."

The Berlin hard fork, meanwhile, is part of an update to the ethereum network, which includes four major changes, which are broken down in a statement released by the Ethereum Foundation. Among others, the upgrades include introducing new transaction types and lowering gas costs.

Balina did add that the while Berlin upgrade is "interesting," the London upgrade, expected in July, is what could make ether deflationary and more scarce than bitcoin, especially after introducing ether's ability to be burned after transactions.

Ether's latest record comes less than two weeks after the coin hit a high of$2,000.