Appearing on Good Morning America Thursday, National Institute of Allergy and Infectious Diseases Director Dr. Anthony Fauci said the U.S. is facing a cycle of new variants that are able to evade the current vaccines if the country does not get community spread of the Delta variant under control.

“That will happen, George, if we don’t get good control over the community spread which is the reason why I and my colleagues keep saying and over again, it is very important to get as many people vaccinated as we possibly can,” Fauci said to GMA anchor George Stephanopoulos. Fauci then went on to address vaccine hesitant Americans.

“People who say, ‘I don’t want to get vaccinated because it’s me and I’ll worry about me, I’m not having any impact on anybody else,’ that’s just not the case,” he said. In fact, Fauci warned that those people may be making the situation worse for everyone else by providing a vulnerable population in which new mutations can arise.

“And when you give it ample opportunity to mutate, you may sooner or later get another variant, and it is possible that that variant might be in some respects worse than the already very difficult variant we’re dealing with now, which is a major reason why you want to completely suppress the circulation of the virus in the community,” observed Fauci.

Nationwide, there are 93 million eligible Americans who have not gotten vaccinated, according to Fauci. That count does not include an estimated 48 million children under 12 who are currently not eligible for vaccination, and so are also vulnerable.

In an interview with McClatchy on Wednesday, Fauci warned the country could be “in trouble” going into fall unless a large portion of those unvaccinated Americans get jabs.

Indeed, in summer 2020, infectious disease experts warned that, if the country saw a fall surge, it would be much larger than the spring 2020 surge, because it would start from a higher baseline due to the plateau on which the spring surge ended.

“And so when you look at the curve of acceleration of 7-day averages of cases per day, it is going up in a very steep fashion,” he said. That assertion is readily apparent in the chart plotting case counts over the course of the pandemic. The most recent rise is more vertical than either the April 2020 or the July 2020 surges. And it would leave the country going into fall 2021 at much higher plateau than that it experienced going into fall of 2020. See chart below. 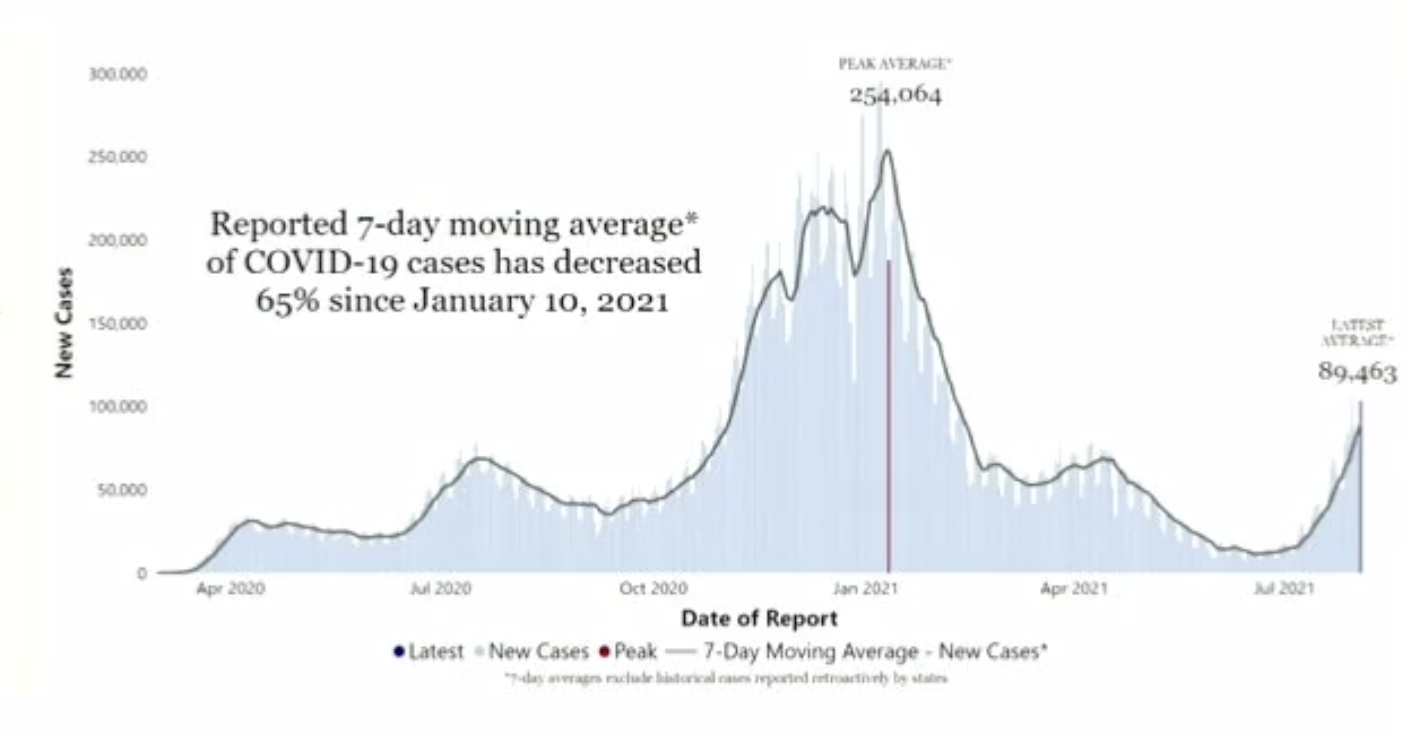 The highest number of cases recorded in a single day was 295,880 on Jan. 7. By June 14, reported cases had plummeted to 8,069. On Thursday, according to the CDC, the number of daily cases had again risen, clocking in at 103,445 across the U.S. The 7-day daily case average has risen 43% in just the past week. The 7-day daily average of hospital admissions nationwide is up 41% over the same period, according to CDC Director Dr. Rachel Walensky at the White House Covid-19 Response Team briefing on Thursday.

“If we don’t crush the outbreak to the point of getting the overwhelming proportion of the population vaccinated, then what will happen is the virus will continue to smolder through the fall into the winter, giving it ample chance to get a variant which, quite frankly, we’re very lucky that the vaccines that we have now do very well against the variants — particularly against severe illness,” Fauci told McClatchy. “We’re very fortunate that that’s the case. There could be a variant that’s lingering out there that can push aside Delta.

“If another one comes along that has an equally high capability of transmitting but also is much more severe, then we could really be in trouble,” he warned. And it’s not just those choosing not to get vaccinated who would be in trouble.

Of the current 58,000 Covid hospitalizations in the U.S., 18 to 49-year-olds account for 41%, according to CDC data. That’s a far cry from the hospitalization trend the country saw toward senior citizens early in the pandemic. We have the Delta variant — and the slow pace of vaccinations — to blame for that.

What’s more, pediatric hospitalizations are 3.5 times what they were a month ago. The American Academy of Pediatrics reported that cases for kids under 17 nearly doubled over the last two weeks of July, from 39,000 a week to 72,000. On Tuesday, Los Angeles reported its first death of a child under 12 in months. That, as many children start back to in-person learning in the next two weeks.

Data published overseas show that the Delta variant makes children more sick than past variants. Fauci cautioned on Thursday that that data is not strong enough to be conclusive.