Affluent shoppers are splurging on new outfits at Macy’s, Nordstrom and other high-end outlets, while lower-income customers are pulling back on discretionary items, leading retailers say.
Macy’s (M) said Thursday that comparable sales at stores open for at least one year grew 12.4% during its latest quarter compared with the same stretch a year ago.

“While macroeconomic pressures on consumer spending increased during the quarter, our customers continued to shop,” Macy’s CEO Jeffrey Gennette said in a press release. 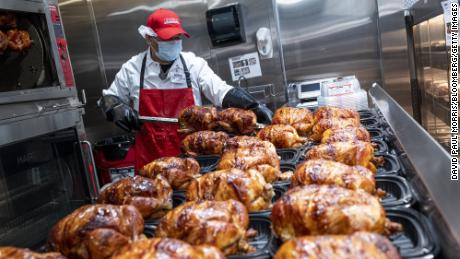 “Luxury sales remained a standout for our business as shopping behavior among high-income consumers has so far remained less affected by inflation,” he said on a call with analysts. “The customer that’s under $75,000 of annual income — they were the most affected.”
Macy’s raised its guidance for the year, pushing its stock up 12% in early trading Thursday.

Nordstrom (JWN) on Tuesday also reported strong sales during its latest quarter and raised its full-year guidance. Nordstrom saw similar shopping trends as Macy’s.
“Customers refreshed their wardrobes for occasions such as social events, travel and return to office,” Nordstrom said. The department store sector has struggled in recent years, but Macy’s and Nordstrom are benefiting from wealthier consumers making discretionary purchases.
Luxury goods and clothing brands have also capitalized on spending from higher-income shoppers.
“Our consumers are resilient. They’re at the higher end of income demographics, and they’ve proven through Covid that their desire for the brand has increased,” Ralph Lauren (RL) financial chief Jane Nielsen said this week.
But there is a split in shopping behavior that runs along economic lines, some companies say. Federal stimulus spending has ended, and inflation has grown at the fastest pace in decades, leading lower-income consumers to alter their buying patterns.
Companies say lower-income shoppers are slowing their spending on discretionary items, buying cheaper private-label brands and adding fewer items to their shopping carts.
“I think what we’re seeing is a bit of a bifurcation. So we are seeing some customers who are trading up into those more premium brands,” said Kohl’s (KSS) CEO Michelle Gass. “And then you also see though a lot of customers going to” private-label brands.

Walmart (WMT) also said some consumers were switching from gallons of milk to half-gallons and to private-label grocery brands.
“Obviously, with higher fuel and food prices, discretionary spending for the lower-end customer is being squeezed,” said Ross Stores (ROST) chief operating officer Michael Hartshorn. “We saw customers… pull back on spending in the first quarter.”
Source: Read Full Article