Home » Business » Grocery stores are struggling to stock their shelves. Here's why

New York (CNN Business)Sam Dancy has witnessed it all during his 30 years at supermarket chain QFC in Seattle. But the Omicron variant is pushing him to the brink.

Dancy is a front-end supervisor overseeing the store’s cash registers, self-checkout kiosks, customer service and liquor departments. In late December He worked 11 straight days because of staffing shortages caused by the spread of the highly-contagious Covid-19 variant.
Now the rapid spread of Omicron is putting new pressure on essential workers already worn down after nearly two years working through a deadly pandemic. But, unlike millions of office workers, they can’t stay home and make a living.

Staffing at the store where Dancy works is at its worst level since the pandemic, lower even than during the first wave in March 2020, said the 62-year-old shop steward for the local United Food and Commercial Workers union. Employees have quit in recent months and management has not replaced them, he added. The store has had to close early on some days because of staffing constraints. 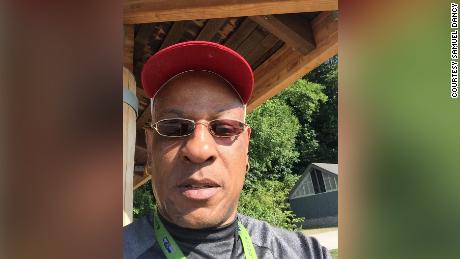 The latest surge of workers calling out sick adds extra responsibilities for Dancy and the employees who have to keep shelves stocked, help customers and complete other tasks. Some customers also shop without a mask, making him feel unsafe.

“Every day has been a struggle,” Dancy said. “I feel like I’m overexerting myself. I’m constantly tired.”
Two weeks ago, he worked on a crowded Sunday when the store was short staffed. It “was the first time in 30 years I thought ‘I don’t know much longer I can and want to do this.'”
A spokesperson for QFC, which is owned by Kroger (KR), said in an email that the chain offers workers comprehensive benefit packages, including an average hourly wage of $18.72. QFC, with around 60 stores, is also actively hiring. QFC said it works closely with health officials to create a safe working and shopping environment and slow the spread of Covid-19.

The demographics of the more than 30 million frontline essential workers differ significantly from those who can work remotely.
Around 29% of White workers are able to work from home, according to an Economic Policy Institute study in 2020. But fewer than one in five Black workers and roughly one in six Hispanic workers can work from home.
Frontline industries are staffed disproportionately by women and people of color, and they are overrepresented in many jobs within those industries, according to the Center for Economic and Policy Research report in 2020.
For example, women, who make up 47.4% of the nation’s overall workforce, account for 50.5% of the nearly seven million grocery workers. Black people represent 11.9% of the workforce, but account for 14.2% of grocery employees.
The latest Covid-19 surge has caused many workers to get sick while others are calling out because their child care plans are in flux as some schools are closing again. And some employees are staying home because they are fearful about catching the virus on the job.
Facing staffing strains, retailers such as Macy’s (M) have shortened their operating hours.
Retail and grocery store workers have faced challenges and safety hazards throughout the pandemic — they are paid low wages and often work for companies without strong paid sick leave policies or benefits. They have also dealt with angry and sometimes violent customers who refuse to wear masks, shoplifting and store shootings.
These factors have contributed to the millions of unfilled jobs in the industry as well as a nationwide labor shortage. 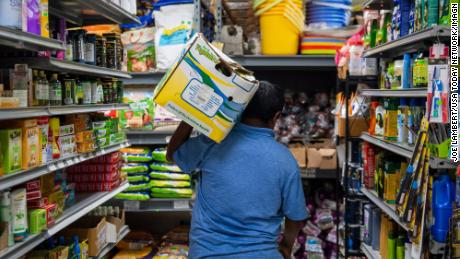 Despite the rapid spread of Omicron, most major retail chains have not reinstituted many of the steps they took earlier in the pandemic, such as offering hazard pay to workers or requiring customers to wear masks.
Hesitant to impose mandates, they also have not required frontline workers to get vaccinated. Industry groups have sued to block the Biden administration’s vaccine mandate for large employers. Rather, companies are offering cash bonuses and other incentives to encourage workers to get vaccinated.
And although many companies have raised wages, inflation has erased at least half of the average pay gains for frontline workers, according to an analysis last month by the Brookings Institute.
“Too few are earning enough money just to get by,” the researchers said.
Mariah Molina, who works at a Target store in Lynchburg, Virginia filling customers’ online delivery and curbside pickup orders, said she’s struggling to keep up as Omicron decimates staffing levels.
“We’re still getting a whole lot of orders every day. It’s harder because we don’t have as many people helping us,” said Molina, a member of the worker advocacy group Target Workers Unite.
Morale is low at the store, she said, and her co-workers are frustrated and overworked. She believes Target should give employees hazard pay to reward them for working under difficult conditions.
A Target (TGT) spokesperson said in an email that the company made a $1 billion investment last year in its staff, including increased wages and bonuses. Target also said it recently exceeded its goal of hiring 100,000 temporary workers during the holidays and 30,000 permanent supply chain workers.

After working at Target since the start the pandemic, Molina has started to look for jobs outside the retail and service industries.
“It would be a lot less stressful and a lot less physically demanding,” she said.
Source: Read Full Article