Home » Business » How the Russian invasion will impact the US economy

New York (CNN Business)Russia’s invasion of Ukraine has sent oil futures above $100 a barrel for the first time since 2014 and will probably bring $4-a-gallon gasoline to much of the United States. But it won’t be a major drag on US economic growth.

Economists project that at most the nation’s gross domestic product, the broadest measure of its economic activity, will have a few tenths of a percentage point shaved off its growth rate. With the economy growing very strong — GDP had its best growth since 1984 last year — America is expected to weather those higher prices just fine, even if drivers are grumbling.
The positives and negatives for the US economy from an oil price hike come close to balancing each other out, noted Paul Ashworth, chief North American economist for Capital Economics.

“While we know it will definitely mean a reduction for the real spending by households [on other goods], there will be a positive impact on domestic oil production,” Ashworth said. But he said that the run up in oil prices the last two years has done less than might be expected to raise oil production, investment spending and hiring by US oil companies. That’s partly because investors and banks have been reluctant to pour more money into fossil fuel companies.

“We’ve already had oil go from $40 a barrel to $90 with a lackluster response by shale producers,” Ashworth said. “So I expect the positive impact on production will be less than the negative on other household spending.

Goldman Sachs also expects only a modest impact on economic growth from the oil price spike — equal to about one-tenth of a percentage point of growth for every $10 rise in the price of an oil barrel. 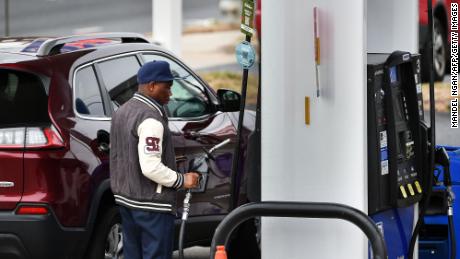 The spike and the fighting in Ukraine could kill the talk of the Federal Reserve raising interest rates by a half percentage point at its next meeting, rather than the traditional quarter-percentage-point rise.
The Fed’s Geopolitical Risk Index is at the highest point since the Iraq War in 2003. If the Fed is more cautious on raising rates, that could cushion the blow that higher oil and gas prices might have on growth.
“We suspect that some participants will see it [geopolitical risk caused by the war] as a compelling reason not to hike by 50 basis points in March,” said a note from Goldman Sachs’ economists on Wednesday.
At the same time, the Goldman analysts noted that the the hit to US GDP growth could be somewhat larger if geopolitical risk increases uncertainty for businesses.

This expected muted impact on the American economy hasn’t always been the case.
The oil spike that followed the Arab Oil Embargo in 1973 was a major cause of the recession of 1973-74. And Iraq’s invasion of Kuwait in August of 1990 nearly doubled the price of oil over the next two months to $40.42 a barrel, or about $85 in today’s dollars. It was a key factor in the the 1990-1991 recession. But the United States depended far more on imported oil then than it does today.
Beyond the question of where the oil came from in those days, the country was far more dependent on oil and other sources of energy overall. As the US economy has shifted from a manufacturing economy to a service economy, the amount of energy consumed per dollar of GDP is about 60% from where it was in 1975, and down about 45% from 1990, even controlling for inflation since that time.
When oil hit $100 for the first time in February 2008, it didn’t cause a recession, partly because the American economy was already well into the Great Recession, a severe downturn brought about by the bursting of the US housing bubble a few years before and the shockwaves that went through the US and global financial system.

The next time oil hit $100 a barrel was in 2011, when it briefly went above that mark. It did so again in early 2012. But it didn’t cause a recession.
The most recent bout of $100 oil before this one started in July 2013, and oil prices stayed near or above that mark for a bit more than a year. But the nation avoided a recession then as well. GDP did turn negative in the first quarter of 2014, but that was attributed to many other factors, including particularly bad winter weather that kept many consumers at home. And the economy bounced back strong in the second quarter of 2014, even though oil prices didn’t fall below $100 for good until the end of July.
Source: Read Full Article