Not long ago Volkswagen was a global pariah after pleading guilty to the biggest emissions fraud in automotive history. Now it is the toast of the stock market, with its shares worth twice as much as they were a year ago.

Ironically, Volkswagen’s misdeeds helped pave the way for its reversal of fortune.

In October 2015, a month after the company confessed to rigging diesel cars to conceal illegally high emissions, shellshocked company executives gathered in the brick-clad high-rise executive office building topped with a giant VW logo that looms over the carmaker’s main factory in Wolfsburg, Germany.

Herbert Diess, who was then the head of the unit that makes Volkswagen-brand cars and was later promoted to chief executive of the parent company, presided over the meeting. After hours of discussion, he and the other executives decided to shake Volkswagen’s reputation as a cynical polluter by developing cars with no tailpipe emissions at all.

The financial commitment Volkswagen made then, when sales of electric vehicles were minimal, is paying off now as the company rolls out a line of vehicles developed from the ground up to run on batteries, with more interior space and more appeal than adaptations of gasoline vehicles.

The ID.4, an electric S.U.V., started arriving at dealers in the United States in March. With a starting price of $40,000 before government incentives, the vehicle may offer Volkswagen its best chance in years to reclaim some of the market share it once had with the Beetle. The company’s electric vehicle offensive is also well timed, as concern about climate change rises and countries like Britain, Spain and France set deadlines to phase out cars that burn fossil fuels.

Investors have noticed, lighting up online stock forums with chatter about Volkswagen and rewarding other established carmakers, like General Motors and Ford Motor, that are pivoting to electric propulsion. Shares of Tesla, on the other hand, have slipped. Tesla is still the most valuable car company in the world by a wide margin, but investors are no longer as certain that Tesla will have the fast-growing electric car market to itself. 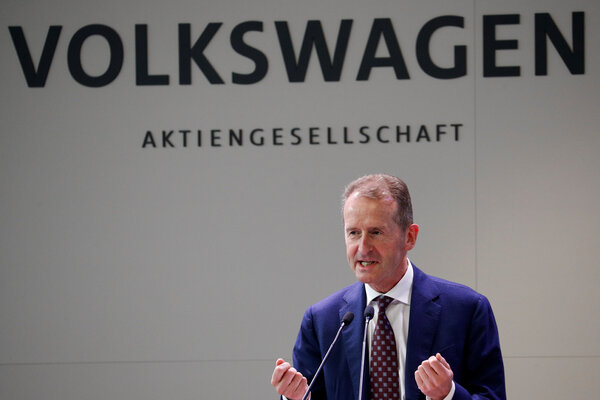 Volkswagen’s swift journey obscures some lingering problems. Corporate governance experts say the company suffers from the same lack of outside oversight that helped allow a toxic corporate culture to develop, leading to the emissions scandal.

Members of the secretive Porsche and Piëch families, descendants of Ferdinand Porsche, who oversaw production of the first “People’s Car” for Adolf Hitler, control 53 percent of the voting shares. The government of the state of Lower Saxony owns 20 percent, and the sovereign wealth fund of Qatar owns 17 percent, leaving less than 10 percent for outside shareholders. (Volkswagen also has preferred shares, which are entitled to a dividend but have no voting rights.)

Christian Strenger, a vocal Volkswagen critic and a former member of the commission that wrote Germany’s corporate governance code, sees little chance the company’s overseers will expose themselves to more scrutiny. The supervisory board has only one member out of 20 who is not a representative of the three main shareholders or Volkswagen employees.

“Nothing will change as long as the old guard is there,” Mr. Strenger said.

The diesel scandal remains a financial burden. The company disclosed in its annual report this week that potential liabilities from lawsuits, such as one by shareholders claiming the company misled them, could cost 4.2 billion euros, or $5 billion. That is in addition to the tens of billions of euros Volkswagen has already paid in fines and settlements since 2017 after admitting that it programmed diesel cars to produce lower emissions in testing conditions than in normal use.

Investors this week were focusing on Volkswagen’s future rather than its past.

In a series of appearances starting Monday, Mr. Diess and other executives outlined a €35 billion plan to build six battery factories, install a global network of charging stations and employ 10,000 software engineers to work on autonomous driving and other new technologies. Volkswagen would become the biggest software company in Europe after SAP, the German maker of software used by corporations to manage functions like logistics and finance.

Volkswagen’s voting shares ended the week up 20 percent in Frankfurt trading and have risen 75 percent since December, despite the company’s reporting a 37 percent drop in net profit for 2020 after the pandemic gutted sales. Since 2015, the shares have more than tripled.

Volkswagen also benefited from a report issued this month by analysts at UBS, the Swiss bank, which rated it as the traditional carmaker best positioned to compete with Tesla because it already has the ability to mass-produce electric cars economically.

Volkswagen’s advantage goes back to the decision made at that meeting in 2015, weeks after the emissions scandal became public.

The executives authorized development of a collection of mix-and-match components that would serve as the basis for a range of electric models including sedans, S.U.V.s and vans. The standardized platform, called the Modular Electrification Toolbox, could also be used by other company brands, including Audi.

It was a major commitment, requiring billions of euros in investment to develop the platform and billions more to write software and retool factories. Volkswagen plans to spend $800 million just to equip its factory in Chattanooga, Tenn., to produce cars using the toolbox.

The platform, which is also being deployed at Volkswagen factories in Europe and China, will allow Volkswagen to exploit the big advantage it has over Tesla: size. With 665,000 employees and sales of 9.3 million vehicles last year, Volkswagen is the second-largest carmaker in the world after Toyota. It can spread the cost of developing new technologies over millions of vehicles and undercut Tesla on price.

By 2025, Volkswagen will be able to produce electric vehicles for less than it costs to build a gasoline or diesel car, UBS analysts wrote in this month’s report. They cautioned that Tesla retains a significant lead in battery technology and autonomous driving software.

The electric toolbox also allows Volkswagen to take advantage of an opportunity to rethink automotive design, unlike rivals that are simply adapting their existing gasoline models.

An electric car doesn’t need a gas tank or a large gearbox, and electric motors are smaller than internal-combustion engines. The batteries can be arrayed under the passenger compartment, freeing up space. Volkswagen says its electric ID.3 hatchback, which went on sale in Europe last year, has as roomy an interior as the larger Passat.

Already, sales of Volkswagen electric cars tripled last year, to 230,000 vehicles, as the company began rolling out the ID.3, the first car on the new platform. “2020 marked a turning point in customer sentiment,” Mr. Diess said during a news conference on Tuesday.

Not everyone is convinced. Mr. Strenger, the governance expert, who is also a former fund manager, said he sold Volkswagen shares this week. He gave Mr. Diess credit for being “very bold” but said the share price “does not relate to the real outlook.”