Home » Business » Immigration explainer: Is Trump following through on his campaign promises?

President Donald Trump and members of his administration patted themselves on the back this week on their core issue of immigration, taking credit for a drop in the number of migrants crossing the southern border and for the construction of “new wall” along that border.

During a campaign rally Monday in North Carolina, Trump claimed “we are stopping them” when referring to migrants trying to request asylum along the southern border. And earlier in the day, Customs and Border Protection Acting Commissioner Mark Morgan credited the administration’s “incredible” and “unprecedented” efforts for a drop in the number of apprehensions along the border in August. These include limiting asylum requests, pressuring Mexico to police its southern border with Central America and forcing many asylum seekers to remain in Mexico while waiting for an immigration hearing.

“President Trump has used every tool available to address the humanitarian and security crisis at this border,” Morgan said during a briefing with reporters at the White House.

But both men left out quite a bit of context when boasting about the administration’s efforts. Here’s what you need to know.

Has there been a drop in the number of migrants crossing the border?

It’s true that border apprehensions fell from July to August, but the Trump administration failed to mention that they remain at historically high levels.

In August, there were 64,006 migrants who either crossed the border illegally or presented themselves at ports of entry without a valid visa. That represents a 22% drop from July, and a 56% drop from the peak of the migrant crisis in May. 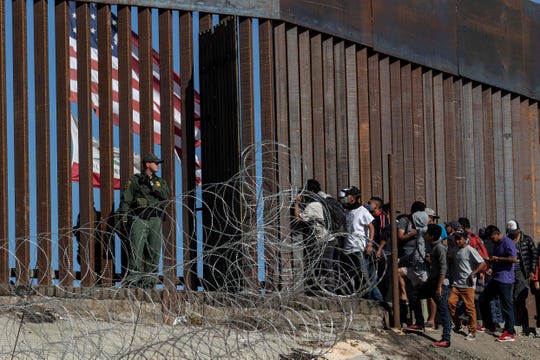 Morgan was also correct when he said that illegal crossing usually rise from July to August, following a summer slowdown when high temperatures limit border crossings. From 2000 to 2018, apprehensions increased from July to August in all but four years, according to Border Patrol data.

So does that mean the Trump administration is meeting its stated goal of deterring illegal immigration?

Although the Trump administration is claiming a major victory, historical data paints a more nuanced view. What Morgan did not mention is that the number of people caught illegally entering the country in August remains far higher than previous years. In fact, the 50,693 migrants apprehended in August represented the highest number for that month since 2007, according to Border Patrol data.

Pulling back to look at the entire year paints a similar picture. With one month remaining in the 2019 fiscal year, the agency has already apprehended 811,016 people, more than any of the previous dozen years.

“Those are still exceedingly high numbers,” said Chris Chmielenski, deputy director of NumbersUSA, a group that advocates for lower levels of legal and illegal immigration and supports the president’s immigration agenda. “The numbers are lower this month, so that’s good. And if they can maintain this, then there’s some real credit that the administration deserves. But right now, we just don’t know.”

What about the border wall? Has the Trump administration started building its long promised barrier between the U.S. and Mexico?

Addressing one of the president’s core campaign promises, Morgan insisted Monday that the administration has already built 65 miles of “new wall” and will build more than 400 miles of additional barriers by the end of 2020.

The administration has been constructing pieces of the border wall, but describing those sections as “new wall” is a matter of interpretation. 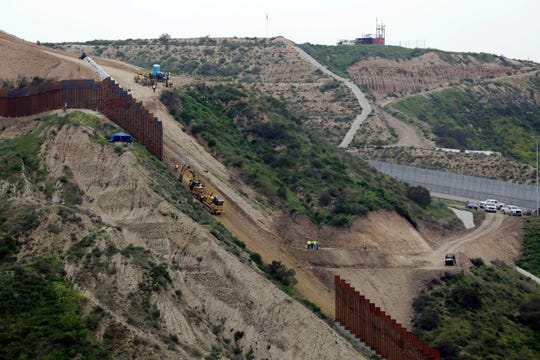 Construction crews replace a section of the primary wall separating San Diego, above right, and Tijuana, Mexico, below left, seen March 11, 2019, from Tijuana, Mexico. Defense Secretary Mark Esper has approved the use of $3.6 billion in funding from military construction projects to build 175 miles of President Donald Trump’s wall along the Mexican border. (Photo: Gregory Bull, AP)

Morgan said such replacement fencing can easily be described as “new wall” since the improved versions provide a new capability to the wall structure. “If you go out there and ask the agents, they’ll tell you that’s new wall.”

“To keep your job at [the Department of Homeland Security], you have to play some serious Twister,” said Ur Jaddou, director of DHS Watch, a pro-migrant group that tracks the actions of the department. “It’s sad to see people who have spent their careers in these agencies having to contort themselves to keep their jobs in this administration.”

What do Trump supporters who want the wall think of the administration’s alleged new barrier?

Trump made the wall a central theme of his 2016 campaign, and is already talking about it on the 2020 campaign trail.

“We are building that wall, and it’s going up very big,” he said during Monday’s campaign rally in North Carolina, leading to chants from the crowd of, “build that wall.”

But supporters who have closely follow the administration’s actions say Trump is clearly exaggerating any progress toward building that wall.

Instead, many of his supporters are holding out hope that Trump’s recent efforts to divert $3.6 billion from Department of Defense construction funds toward construction of the border wall will lead to a quick escalation of new construction in time for the 2020 election.