Home » Business » ‘Jet Airways is being revived, but its employees have no future’

‘The actual amount due to Jet Airways employees is Rs 1,200 crore, and the management is giving only Rs 52 crore.’

Jet Airways staff has sought Civil Aviation Minister Jyotiraditya Scindia’s intervention in addressing their issues vis-a-vis the resolution plan of the Kalrock Capital-Murari Lal Jalan consortium, the new owner of the defunct airline, which they say has denied them their statutory dues and back pay.

Jet Airways was undergoing the Corporate Insolvency Resolution Process (CRIP) ever since its operations were suspended in April 2019.

What have you sought in your letter to the civil aviation minister?

In short, the ground handling staff who worked with Jet Airways for 25 years are now being removed from the company and put under a new agency.

What happens to their gratuity? And it is not a small amount.

The new management, who should ideally pay the gratuity, says they have no idea about it and will not make any such payment as it is an issue from the past.

The point is, someone must pay this gratuity money to the employees.

Are they not paying out Rs 52 crore to Jet employees?

We presented our case before NCLT and said that the amount due to the employees was Rs 1,200 crore. How can Rs 52 crore be sufficient?

And the new management is saying they want a ‘yes’ from 95 per cent of Jet employees (to restart the airline).

But then, what happens to 25 years of our gratuity money? Zero? They are not giving any answer.

But paying gratuity is mandatory under law, isn’t it?

Yes, it is, but who follows it? For the first time I am seeing something like this where gratuity is not being paid.

The former owner of Jet Airways siphoned off the money abroad and workers, here, are in trouble.

How many employees are saying ‘no’ to the new proposal?

All 100 per cent. The officers and staff associations of Jet Airways is a recognised union for the last 20 years and we have said ‘no’ to the new terms.

We have sent a letter to the civil aviation ministry and also to the labour ministry stating that it is essential for them to intervene in this matter.

They are taking care of the airline, but not the employees.

Fifty per cent Jet Airways staff quit the airline. They, too, must get their gratuity.

If employees don’t get provident fund and gratuity, then what is the point of making laws on such issues?

Those who resigned and left also did not get gratuity.

How many employees are protesting now?

4,000 employees are fighting the case with Jet Airways.

Is it not important to restart and revive the airline?

We all want to revive the airline, but what about the services of employees who have put in 25 years in the company? 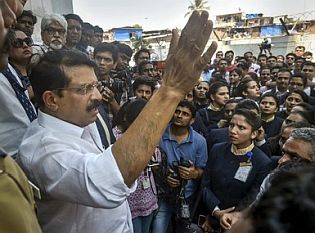 These employees need to be taken care of.

The new management is taking the brand Jet Airways and putting all ground handling employees under a new agency.

For what? You hire former staffers of Jet Airways for the airline itself and not put them in some other company.

Basically, they want the brand Jet Airways to revive, but don’t want to give any past dues to the employees.

Jet Airways is being revived, but its employees have no future.

What about the NCLT’s role?

It is the monitoring committee. I have written two letters to them and have not received any reply. Nobody replies.

NCLT compromised on Rs 52 crore payout whereas the actual dues of Jet Airways employees is Rs 1,200 crore. This is shocking.

Everyone can see how the NCLT is working.

And Jalan, I have not seen him. His name is good only on paper.

Our committee members went to Jalan’s office but they did not meet anybody there. We have no idea about his identity.

How come nobody in the NCLT heard your side of story?

We had told the NCLT that it should make the employees of Jet Airways a party to the final proposal.

NCLT refused and took the final decision, and now we have no choice but to challenge it.

Are you hopeful the government will take up the cause of Jet Airways employees?

They will have to take it up and if they don’t, then we will go to the Supreme Court of India with our plea.