J.P. Morgan’s Michael Cembalest describes himself as a financial traditionalist. “I grew up as a fixed-income person,” he says, referring to one of the least exotic areas of banking.

But what is happening in the leveraged loan world right now has him spooked. It’s “deeply concerning,” he told Business Insider. As the market gets bigger — the size of the deals being done in 2019 hit a record high since 2007 — the quality of that credit has never been worse.

Leveraged loans are money lent to companies at relatively high rates of interest. They’re considered one of the riskier types of commercial debt because the companies that take them often do so as part of a private-equity turnaround or buyout. Leveraged loans are often called “junk” debt.

Cembalest recently devoted one of his “Eye on the Market” notes to the sorry state of poor-quality non-financial corporate loans. “I knew there had been a degradation in loan coverage,” he said. But “when I actually sat down and put pen to paper I was very disappointed.”

“It’s deeply concerning to me when you see the covenant erosion taking place here.”

Those words ought to make the hairs on the back of your neck stand up, given that Cembalest is the chairman of market and investment strategy for J.P. Morgan Asset Management, which has $2 trillion in assets under management.

In Europe, 95% of all leveraged loans are now “cov-lite,” meaning companies have made few promises to investors about how they get their money back

“Covenants” are deal terms that offer protections for the investors who are lending the money. Such protections might include superiority in the order in which a company pays back its debt, or a ban on the company taking on further debts.

But data from S&P Global Market Intelligence’s Leveraged Commentary & Data unit shows that in Europe, 95% of all leveraged loans are now “cov-lite,” meaning that companies have made few or zero promises to investors about how they get their money back. “Cov-lite” loans are even riskier than regular leveraged loans, which were already at “junk” status.

In cov-lite loans, “even companies in default can now make restricted payments, pay junior debt subordinated to you, or pay new debt,”he said on his podcast. In the cov-lite universe, companies are artificially boosting their earnings with one-time add-backs of non-recurring expenses, “assumed synergies,” and other non-standard cost savings, he said. Covenants prevent that kind of chicanery. Cov-lite loans don’t have protections against such behaviour. 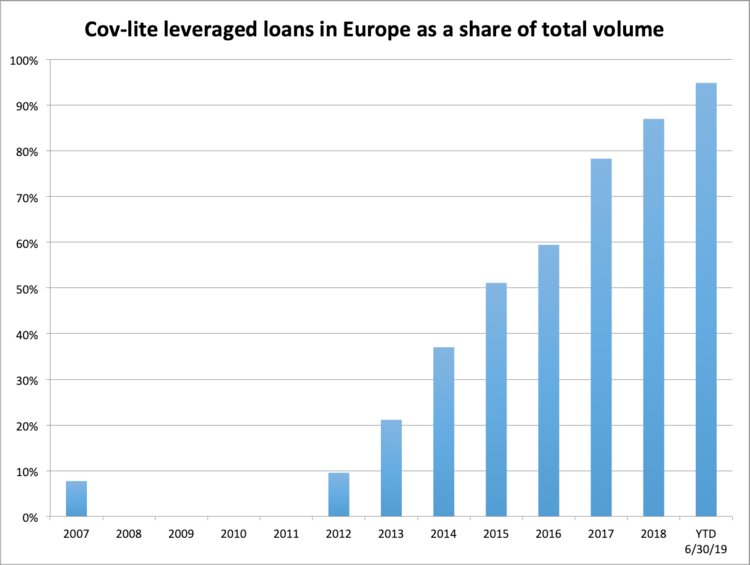 “The foundation of Anglo-Saxon banking principle is ‘sound lending and fair covenants’,” Cembalest said. “That’s not what this is.”

“We’re in the part of the cycle where there is a lot of risk-taking,” he told Business Insider.

The US is a less risky place than Europe, but only slightly, according to S&P. Globally, cov-lite loans are just over 80% of the market right now. 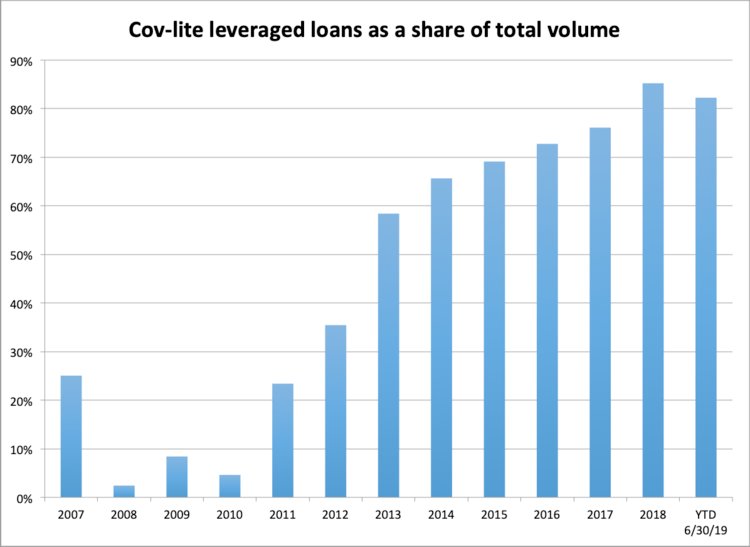 The scale of that risk can be seen in this next chart of transaction size for leveraged buyouts in the US. Although the total amount of loan issuance has flattened off in 2019 from the peak of 2018, the size of individual deals has gone up.

The average deal is now just over $2 billion in size, a record not seen since right before the financial crisis of 2007-2008. 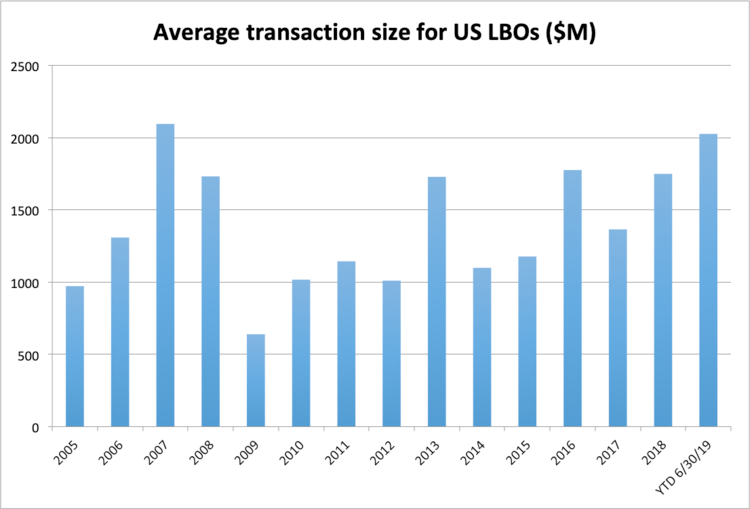 Growing deal size has gone hand in hand with the growing scale of the leverage being taken on.

This chart shows the percentage of all deals featuring companies who have borrowed more than six times their earnings — the largest loans in the market compared to company size. Ten years ago, taking on a loan six or seven times the size of your profits was a rarity. Now, 40% of the entire leveraged loan market looks like that, according to S&P. 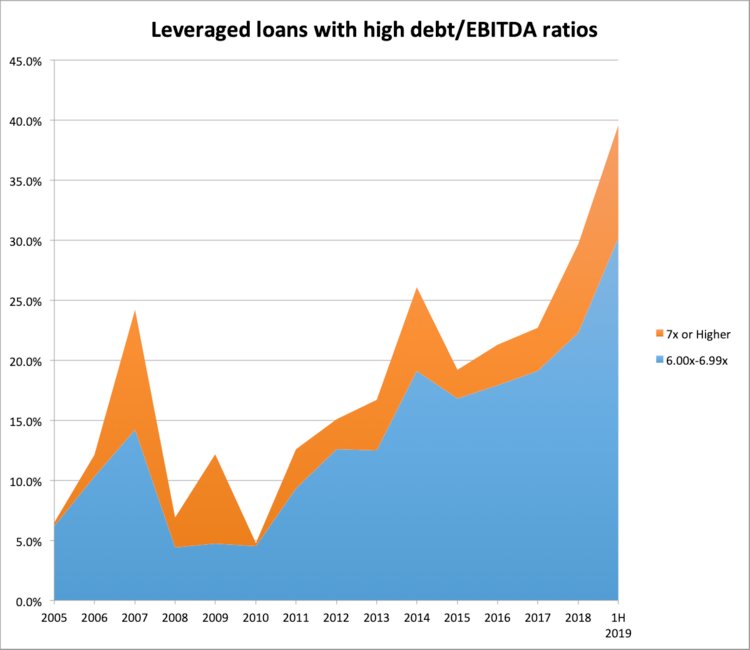 In the broader market, the average ratio of all leveraged buyout debt to earnings now stands at 5.9 times. Historically, regulators frowned upon anything over 6X butTrump administration officials recently told the market that the 6X ratio was now considered guidance and not a rule. 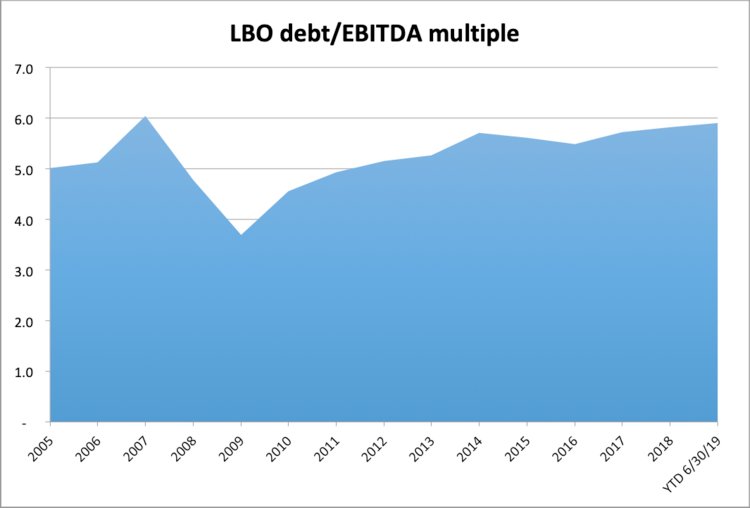 The market is driven by low central bank interest rates, Cembalest believes. With cash and bonds paying trivial rates of interest, “no stone was left unturned globally for people to get yield,” he said. The result is that leveraged loans have morphed from the kind of specialist investment that only a sophisticated institutional investor would hold into a product that has wormed its way into consumer holdings.

“In bad markets liquidity goes down”

There isn’t much transparency on who owns what. But Cembalest worries about leverged loans turning up inside unexpected portfolios, such as mutual funds, SEC-approved vehicles, public pension plans, insurance companies, hedge funds, private credit funds, college tuition funds and endowments, Japanese pension insurance schemes, or Latin American offshore funds. Managers at those sorts of institutions are under pressure to show results — so the yield on leveraged loans must look attractive.

The lack of transparency means it is difficult to gauge the relative liquidity, or illiquidity, of the market.

“The leveraged loan market is one of those markets that is highly liquid when everyone wants them but really illiquid when no one wants them,” Cembalest said. “In bad markets liquidity goes down.”

There are two bits of good news, however.

First, Cembalest does not believe the leveraged loan market is big enough to implode like the mortgage market did in the financial crisis of 2007-2008, even though he thinks the leverage being taken on is “similar in principle.”

And second, although the mark-to-market trading price of loans collapsed in 2009 by 30% during the crisis, the actual realized losses for anyone who held them was probably under 10%, JP Morgan estimates. “It took 6 months before pricing accurately reflected the losses incurred,” Cembalest said. 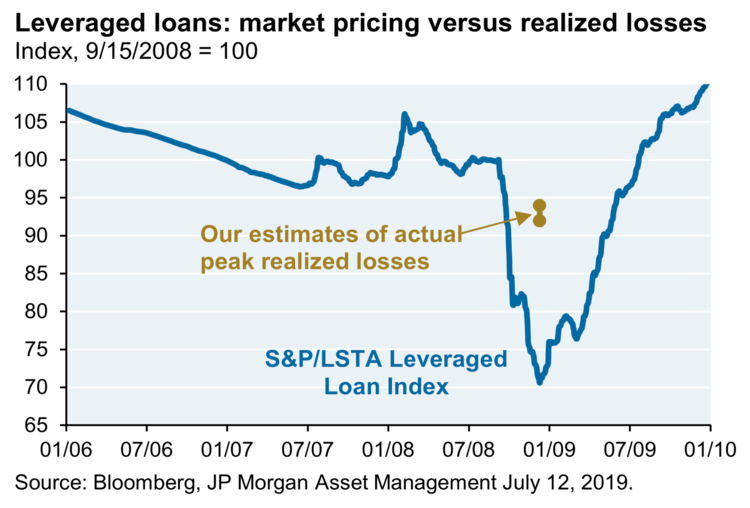