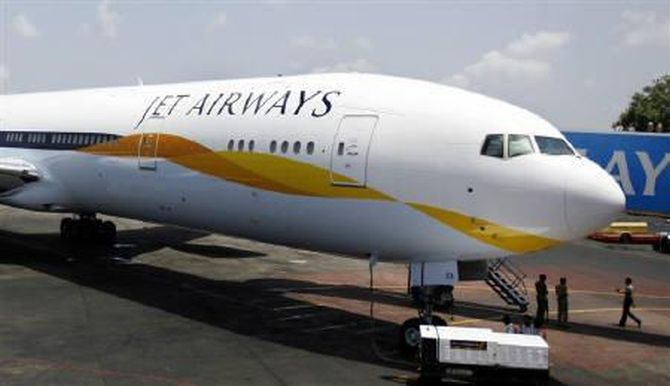 The Directorate General of Civil Aviation has suspended the flying licence of two Jet Airways pilots for attempting to take off an aircraft from a taxiway parallel to the runway at Riyadh airport in Saudi Arabia last week.

As many as 148 people on board the Mumbai-bound Jet Airways flight escaped unhurt after the aircraft went off the runway following an aborted take off from there on August 3, the airline had said.

An official of the aviation regulator DGCA had said that the pilots aborted the take off after they were informed about a “barrier” on the runway.

The aircraft was taxing at 100 knots. It veered off the runway due to sudden stopping, the official had said.

“The DGCA has suspended flying licence of both the pilots involved in runway excursion incident at Riyadh, pending investigation,” a senior DGCA official said on Monday.

Earlier on Monday, the Saudi Aviation Investigation Bureau in a release said the aircraft aborted taking off on a taxiway that ran parallel to the runway.

“Initial factual information confirmed that the aircraft attempted to take off from taxiway (K) parallel to take off designated runway (R33) while the visibility was high and there was no obstacle of FOD (foreign object) on the taxiway,” it said.

“The aircraft accelerated with full take off power and exceeded the taxiway onto an unpaved area, ending up close to the exit of taxiway (GF), north of taxiway (K),” it added.

The AIB is conducting a safety probe into the incident along with India’s Aircraft Accident Investigation Bureau.

Jet Airways in a tweet said on August 3 that its Mumbai-bound flight had aborted the take off and veered off the runway at Riyadh airport, but the airline had not specified any reason for it.