Livestream shopping is on fire.

Already a massive trend in China, it’s expected to account for up to 20 percent of the region’s total e-commerce sales by 2022, according to HSBC and Qianhai Securities, while Coresight Research estimates that it will hit $300 billion this year alone.

Now live shopping appears poised to explode in the U.S. Coresight predicts that American consumers will send shoppable livestreams soaring, from $6 billion last year up to $11 billion this year, and as much as $25 billion by 2023.

Matt Moorut, principal analyst at Gartner, shed light on the distinctions between the two markets: “There are some quite marked differences between the way that it works in China and the way that it works in the U.S. at the moment — a few different stumbling blocks — one of which is that the platforms able to facilitate this in the West just don’t have the same level of maturity as some of the ones in China,” he told WWD.

Moorut cited Alibaba’s Tmall as a prime example of robust functionality, ease of use and seamless interactivity. Of course, it’s not alone. Other e-commerce juggernauts, including Douyin, Weibo, Taobao and WeChat, have individually and collectively cultivated a mobile-based shopping culture that voraciously consumes this form of e-commerce.

All the Looks at the 2021 Cannes Film Festival

As for western audiences, “it’s likely going to take a bit of time before consumers get used to the fact that they can use this as a viable shopping and discovery channel as well,” Moorut said.

There’s no shortage of companies trying to make that shift, and it could all come down to delivering the right tech at the right time. And that time is unquestionably now.

Livestream shopping — which blends entertainment, product demos and purchasing in a live online broadcast — captured a restless, homebound public as COVID-19 hobbled physical retail. That it existed before the health crisis matters less than the fact that it accelerated during the pandemic-driven boom in e-commerce.

Gartner analysis of Google search trends from January to June 2020 shows that general interest in livestreams jumped in March across Instagram, YouTube and especially Facebook, as lockdowns ramped up. 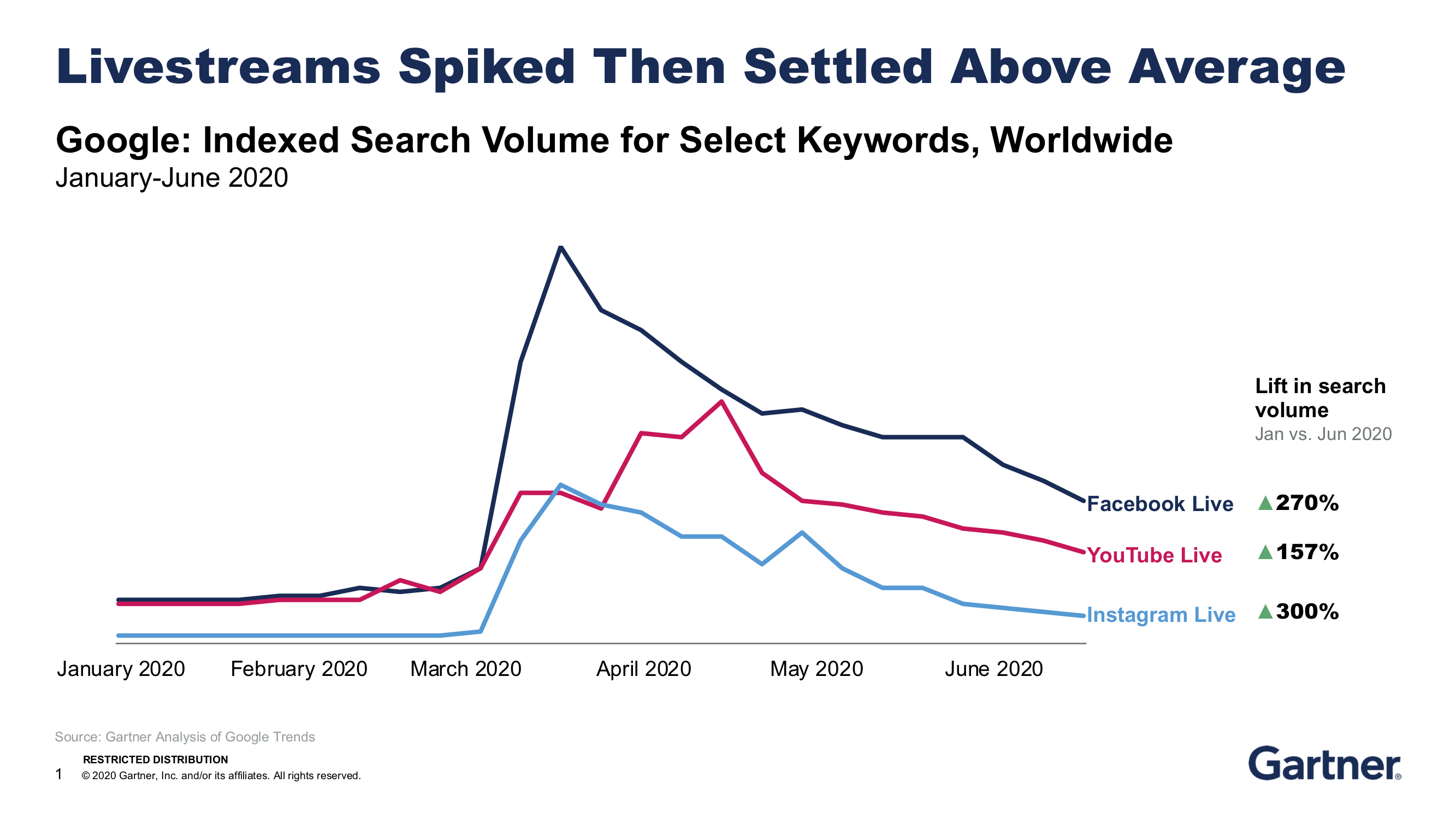 Gartner tracked data from Google search trends and noted the jump in livestream interest at the start of the pandemic. Courtesy image

Over the last few years, livestreaming’s translation to shopping has triggered a flood of newcomers looking to change the retail game, and they appear to be arriving just in time for the boom. That prospect has venture capitalists seeking out the hottest new start-ups, hoping to find a unicorn in the crowd.

Live shopping has become a priority inside the world’s biggest tech companies, as well as venture capitalists seeking out hot new start-ups, hoping to find a unicorn in the crowd.

The spate of start-ups touting livestream shopping features has become legion, though a few stand out due to the excitement they’ve generated among investors, their point of view or approach to tech development.

Verishop, a two-year-old e-commerce site for curated fashion, beauty and home goods, dove into livestream shopping less than a month weeks ago with an ambitious launch. The company debuted the feature with more than 115 experts, influencers and brands offering more than 125 livestreams, running at 12 hours per day and covering more than 100,000 products.

For cofounder and chief executive officer Imran Khan, livestreaming was a natural evolution of a marketplace built to help independent brands and retailers with discovery. A former Snapchat executive, he understood the power of video for commerce, and Verishop had already worked on shoppable video — a related, but slightly different proposition that can be prerecorded in a one-way viewing experience, as opposed to a live broadcast with a real-time, interactive chat — as well as group video shopping.

Livestreaming was a logical way to build on that development and give customers different ways to shop. “We created a complete end-to-end shopping experience, with livestreaming as one form of discovery,” Khan explained to WWD. “And we have the entire spectrum of discovery, from search to filter to feed-based, content-based discovery to live.”

Khan’s chops and his vision has drawn plenty of investors, with one $30 million fundraising round in 2019 valuing the company at more than $100 million.

While live shopping is just one part of Verishop, it’s a more fundamental part of other start-ups.

Founded in 2019, this livestream e-commerce site for collectibles and fan merchandise secured a $20 million Series A in March, and months later drummed up another $50 million in a Series B round led by Andreessen Horowitz.

The company doesn’t disclose hard numbers, but a spokeswoman described its traction among sellers in the thousands and buyers in the tens of thousands. Some merchants earn more than six figures, she said, and “a majority of buyers returning to the app.”

Connie Chan, general partner at Andreessen Horowitz, explained the appeal in a note: “We’re seeing an incredibly high level of engagement with buyers and sellers on the platform,” she wrote. “People will tune in to hours-long livestreams just to see what their favorite sellers have available and engage with other fans, even if they don’t buy anything.”

But they do buy, according to Whatnot, and the company aims to expand the categories available, going from Funko Pop figurines, comic books and Magic: The Gathering cards to, later this year, it plans to branch out into vintage fashion.

The entertainment experience looms large across multiple start-ups, and it looms large at Popshop Live as well. The resale marketplace offers everything from fan collectibles — what it’s primarily known for — to clothing, jewelry and accessories.

Founder and CEO Danielle “Dan Dan” Li described Popshop as an “intersection of entertainment, social and commerce,” built from the ground up with each area in mind, complete with its own storefront management system and social and real-time engagement features.

“You can see a lot of livestreaming e-commerce platforms are a lot more transaction driven,” she explained to WWD. “But in Popshop, you can see why people come here, not just to purchase, but also to get inspired, get entertained or connect with other people on the platform.” The company raised $3 million in a seed round last year, with plans to flesh out its staff, develop new features, more live content and bring in more sellers.

Streaming tech providers like Powerfront Live and Buywith aim to give brands a way to add livestreams to their websites, event sites or product pages.

Buywith’s live shopping tech works on “any website without any code integration,” noted Adi Ronen, CEO and cofounder. The five-year-old company upped the ante in April by joining forces with Zappo’s and Boohoo on an invite-only livestream shopping marketplace. After recently going live, the company attracted new retail partners, including Forever 21. 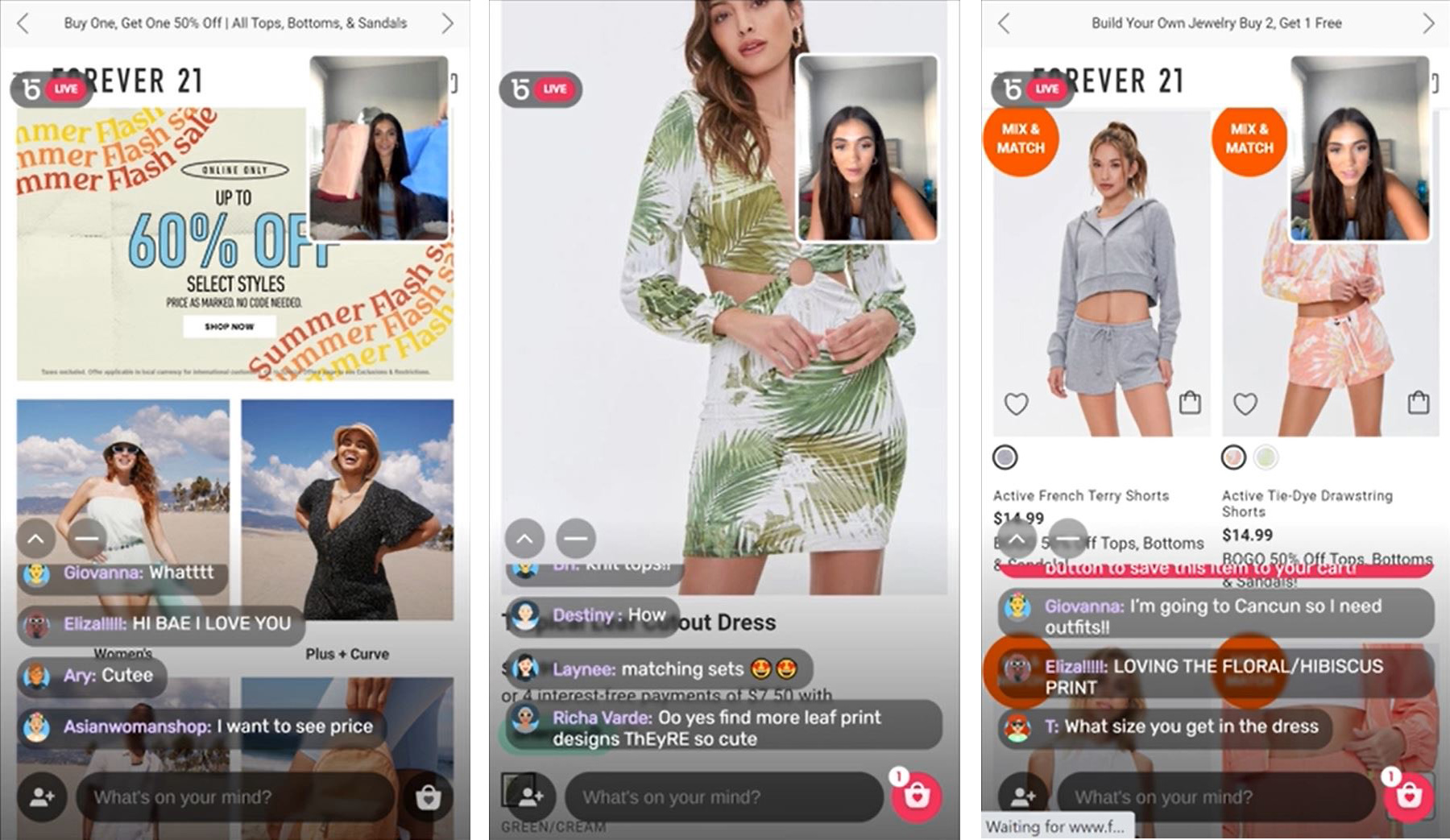 The team vets influencers by analyzing their social media profiles and metrics, perhaps for understandable reasons: An early livestream with celebrity stylist Maeve Reilly showed a 33 percent boost in average order volume, a 70 percent increase in sales conversion and a 61 percent engagement rate during the session.

The company created “a self-serve platform” that can supply shopping hosts and influencers or let brands to use their own, allowing them to ramp up dozens, even hundreds of live sessions monthly.

“Our vision, after we launched the marketplace, is to be the Twitch of e-commerce,” explained Ronen, referring to the livestreaming platform for gamers. “So if you’re entering a Twitch to watch people game online, you will be able to come to Buywith to watch people shop online. And then the end users could browse and discover live sessions.”

One Buywith livestream can also air in multiple places — whether in the marketplace, on the brand’s site or another webpage.

Ntwrk started out in 2018 with the idea of building on the concept of product drops, the type that has sneaker fans waiting all night to blow their paychecks. The company’s spin on it brings shoppable livestreams to exclusive products, with a roster of A-list personalities often added to the mix.

The business rationale for starting the company was to “reimagine and reinvent what QVC and HSN were — you know, sort of the linear, old school space for Gen Z and Millennials,” explained Moksha Fitzgibbons, Ntwrk president.

But during a pandemic, the business has come to represent more than that. Fitzgibbons figures that being entertained and getting access to rare products adds a level of excitement that “really fills a void for them and more,” he said. Still, he bristles at the notion that hosts must be celebrities to work the streams.

While the company loves that sneakers hyped by the likes of, say, Dwyane Wade, Kevin Love and Dennis Rodman, tend to bring hardcore sneaker fans to the platform, the Ntwrk exec argues that it’s just one part of the picture. “It’s artists as big as Billie Eilish on one end, who will go live and sell prints, apparel, whatever it is that is appropriate at the time. It’s also brands like Nike, Puma, Balmain, etc. to smaller creators like Mr. Flower Fantastic, Matt Senna, Christina Martinez,” he said.

“Brands and creators of all shapes and sizes have an opportunity to come on, go live, express themselves creatively and really engage and build a community on the platform. And then commercialize that moment through whatever product they’re making available,” he added.

The approach seems to work, grabbing attention from all fronts. Last year, the business attracted TikTok, which collaborated with Ntwrk and artist and designer Joshua Vides on an exclusive limited-edition apparel collection, and the venture funding crowd, which gave it $10 million to date, including investment from rap artist Drake. Meanwhile, its mobile app is on track to nab 5 million downloads by the end of the year.

Bambuser, which just launched social media multistreaming earlier this month, is a newly minted winner of the LVMH Innovation Prize and just launched in the Shopify app store. Meanwhile, other tech providers like Powerfront Live continue to court brands, while players such as Glamhive styling platform and freshman platform Galaxy fashion resale marketplace get their livestreams on.

A notable absence may be social marketplace Poshmark. The 10-year-old company may or may not be considered a start-ups, but its lack of shoppable livestreaming options is surprising, either way.

However, it may not be long before the tech-driven company catches the streaming wave. After all, the platform is well-suited for it, with a framework already in place with its “Posh Parties.” The themed shopping events are live for set periods of time and feature items by brand, product type and other categories, along with curated “host picks.”

But Posh Parties’ essence is more like a collection of “live listings” than livestreams, chief executive officer and founder Manish Chandra explained, but then teased, “not that we’re not going to get there.”

If or when it does, it will have to jockey to find a place in a bustling arena that, most likely, already will have crowned some winners, while sending others streaming out the door.