Total compensation of L&T’s executive directors (including Subrahmanyan) in FY22 was 120 to 670 times the median remuneration of the company’s employees. 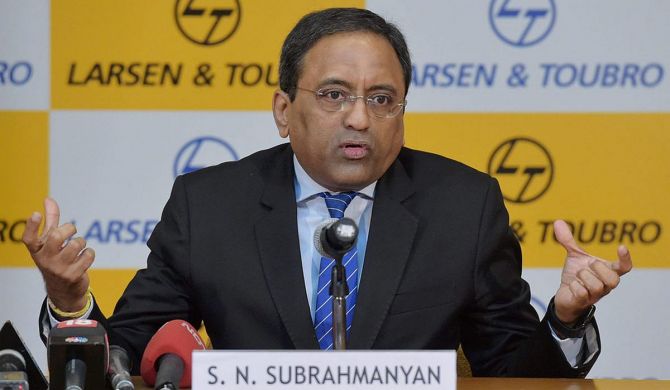 Engineering giant Larsen & Toubro (L&T) handed out a pay cheque of Rs 61.27 crore to its chief executive officer (CEO) and managing director (MD) SN Subrahmanyan in the last financial year (FY22), which is a near 115 per cent hike over FY21, as executive compensation at India Inc comes under sharp focus after two years of Covid-19.

In fact, the total compensation of L&T’s executive directors (including Subrahmanyan) in FY22 was 120 to 670 times the median remuneration of the company’s employees, data from its FY22 annual report shows.

This points to sharp hikes that the top management saw in their remuneration during the period, experts in human resources said. In FY21, L&T’s executive compensation was 56 to 337 times the median remuneration of company employees.

A recent study by Deloitte, covering over 470 companies across sectors, shows that Indian CEOs received an average compensation package of Rs 11.2 crore in FY22, the highest in three years.

This came as sales and profit growth improved in FY22, prompting companies to reward their top executives for the same.

In FY21, the average CEO compensation was Rs 9.4 crore, while in FY20 the average remuneration was Rs 9.8 crore, Deloitte said. Compensation for all three years, the consultancy said, was for both promoter CEOs as well as professional CEOs, taking into account long-term and short-term incentives.

In L&T’s case, the hike in executive compensation came as L&T got back to growth in FY22, reporting a 15 per cent year-on-year (YoY) consolidated topline increase to Rs 1.56 trillion.

In FY21, topline declined by 6.9 per cent to Rs 1.35 trillion due to Covid-19-led disruption in business activity.

In FY21, the group-level profit attributable to shareholders (excluding extraordinary items), had declined by nearly 22 per cent to Rs 6,965 crore, its annual report shows.

Group chairman AM Naik said in the company’s FY22 annual report that the topline and bottomline growth was aided by improved project execution and manufacturing activity further complemented by a strong pick-up in the services business.

“Our order inflow for the year at Rs 1.92 trillion was achieved on the back of major domestic and international order wins in hydrocarbon and infrastructure.

“Although the domestic ordering environment was a shade below expectations, the international environment, especially in the West Asia, is a cause for cheer,” Naik said.

In FY21, L&T’s order inflow stood at Rs 1.75 trillion, led mainly by demand from the infrastructure and hydrocarbon segments in the domestic market.

Order inflows indicate the segments from where business will come for an engineering company.

While the order book is an actual reflection of all the orders or projects that have been placed by customers or clients with the company.

This increased to Rs 3.57 trillion in FY22, a growth of 9.17 per cent over the previous year, data from its annual report show.

An uptick in business activity reflected in the compensation package of other key executives of L&T including chief financial officer (CFO) S Shankar Raman, whose total remuneration jumped 116.32 per cent in FY22 over the previous year to Rs 28.62 crore.