New York (CNN)You can now add toys to the growing list of products that global supply chain woes have made more expensive to produce.

Toymaker Mattel (MAT) whose brands include Barbie, Hot Wheels, Fisher-Price and American Girl, said in an earnings conference call on Tuesday that it is raising prices in the second half of the year in the run-up to the holiday shopping season, which is the toy industry’s most-important sales period of the year.
Mattel CEO Ynon Kreiz said on the call that the company is “managing through global supply chain challenges” that include higher production and shipping costs, and is choosing to offset those by implementing higher prices for its toys in many of its key markets.

Its unclear whether stores, which ultimately sell Mattel’s products to consumers, will themselves pass on those increases to shoppers. 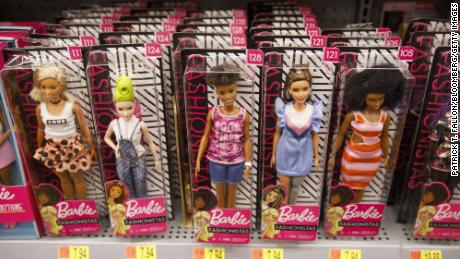 The post-pandemic recovery has been stymied by a confluence of challenges tied to the supply chain even as consumer demand has rebounded. Businesses across the board are not only struggling to meet the heightened demand by having enough inventory on hand, they’re also dealing with a shortage of shipping containers and bottlenecks at ports that has increased the cost of moving products around the world.

There's only one left of this popular toy. It's going for $28,000
“We still foresee continuing supply chain challenges for the rest of the year,” Kreiz said. “Of course, there could be still unanticipated supply chain challenges, and it’s hard to tell what the future may hold.”
Mattel’s comments come on the heels of rival Hasbro (HAS) saying it, too, will be increasing prices later in the year to “offset the rising cost of freight and commodities we continue to see across the business.”
Hasbro, whose brands include Transformers, My Little Pony and Nerf, told analysts during its earnings call on Monday that it also is trying to work through anticipated port congestion and ongoing ocean shipping constraints that will continue in the second half of the year.
Hasbro CEO Brian Goldner said the toymaker’s decision to raise prices is consistent with “so many consumer product categories across the board where we’re seeing the snapback in [consumer] demand” which is being pitted against supply chain problems.
Parents hoping to nab this year’s hottest toys might need to act fast when they become available because of the tighter supply. Panjiva, the supply chain research unit of S&P Global Market Intelligence, said in a media webinar on Monday that the impact of the supply chain congestion will likely impact the holiday season, resulting in shortages of trendy items and making the hot toys “harder to come by.”
Jim Silver, a toy industry analyst and CEO of Toys, Tots, Pets & More, an industry review website, agreed that restocking could become a problem.

“In respect to the hot toys, the supply chain issues will slow down the replenishment system,” he said. “So if certain toys sell out quickly, it will take longer to replace that inventory. That being said, many holiday toys were made months ago, shipped already, and are already here or in route.”
Mattel, citing robust consumer demand, logged sales in its second quarter ended June 30 that were up 40% over the same period a year ago, spurred by the continued popularity of its Barbie, American Girl dolls and hot Wheels toy brands. Hasbro’s sales rose 54% in its second quarter ended June 27, versus the same period a year ago.
Source: Read Full Article