Washington (CNN)After terror attacks in Brussels on Tuesday, Libertarian presidential candidate John McAfee, who is better known for his a eponymous cybersecurity software, had strong words for the government and dismissed anti-terror approaches offered by his more mainstream opponents.

McAfee said he supports a total overhaul of the nation’s counter-terror apparatus, one that focuses on patterns within global communications and not individual conversations.

“We are blinded in our history in what used to work. It no longer works,” McAfee said. “The digital age has changed the paradigm.”
He said Democrat Hillary Clinton’s call for increased surveillance was outdated and dismissed a recent controversy over whether private companies should help the government break encryption on terrorist’s phones as irrelevant.
RELATED: Clinton calls for more surveillance, police after Brussels attacks

He also dismissed the reactions of Donald Trump, who called for torture of terror suspects, and Ted Cruz, who called for law enforcement to “patrol and secure Muslim neighborhoods.” McAfee said they, like the government, had “missed the point” by focusing on monitoring individuals instead of foreign states with sophisticated cybersecurity systems.
“I wouldn’t care if the entire country of Syria came here, if we had the cybersecurity system in place,” McAfee said.
McAfee said his preferred system would detect terrorist plots before they can go into effect.
“If we had a coherent cybersecurity policy, we would’ve known about this the moment it was hatched,” McAfee said, advocating for what he called the Chinese approach to national security.
“It would be impossible to hatch a plan against the Chinese,” McAfee said.
In a recent editorial, McAfee wrote China is “capable of gathering all inputs prior to encryption and capturing screen shots after data has been decrypted.” Handing so much information to the government also sounds like it would run afoul of libertarian ideals. But he argued it would not violate Americans’ personal privacy because it would be totally focused outside the country. That doesn’t account for the homegrown terrorism that U.S. law enforcement say they fear.
He acknowledged in an interview that his ideal system would be “difficult to explain.”

‘I believe this is the year of the third party’

In keeping with his background, McAfee originally launched his presidential bid under his own banner, as the nominee of the “Cyber Party,” before declaring himself a Libertarian candidate in December. The Libertarian Party, he has pointed out, has ballot access in all 50 states. His Cyber Party did not.
According to FEC records, Gary Johnson, the Libertarian Party’s 2012 nominee and a 2016 contender, received .99% of the popular vote, and Bob Barr, the 2008 nominee, received .4% of the popular vote.
Despite this lack of support for the Libertarian Party in recent elections, McAfee said his more mainstream rivals like Clinton and Trump are not right to lead in the digital age and that 2016 is the year his party can break through.
“I believe this is the year of the third party,” he said.
McAfee made millions developing the cybersecurity software that bears his name and is now a privacy advocate, although he has also drawn attention for his personal exploits and controversies.
He became the subject of international scrutiny after going into hiding following the shooting death of a businessman near his island compound. After a whirlwind of events, he ended up living, for a time, in Montreal before settling into a home with his wife in Lexington, Tennessee. 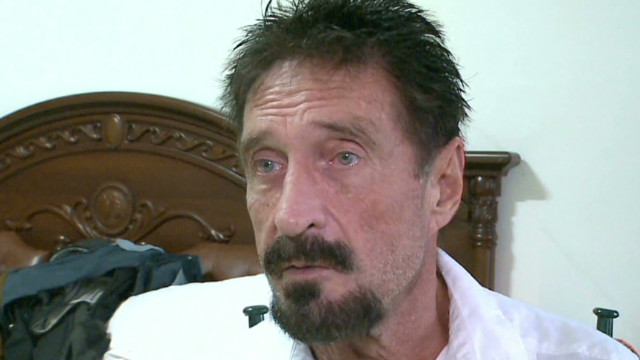 He has continued to focus on cybersecurity, recently evangelizing a new product, dubbed “Everykey,” which centralizes personal access to devices and accounts.
McAfee’s campaign has been largely social media-driven coupled with appearances at Libertarian events in the lead-up to the party’s convention in late May. He has posted dramatic videos to his various accounts and published regular editorials, occasionally responding to current events by offering his cyber expertise to Trump and the FBI.

McAfee, who had few kind words for Trump, said the Republican front-runner’s appeal came from populist anger with the government and the established political class.
But he warned such anger came with serious risk.
“An angry people cannot create anything that is not imbued with anger,” McAfee said. “God, please let there be other options.”
He stressed his own commitment to privacy and near-absolute personal freedom alongside his existential fear of cyberwar with China.
“I know of no one in this country who does not believe we have had personal freedoms taken from us,” McAfee said.
He criticized Transportation Security Administration checkpoints and the National Security Agency as examples of government overreach.
“I do not feel protected. I feel like the enemy,” McAfee said of airport security in a separate interview before the Brussels bombings.

McAfee mocked both Trump and Clinton for a lack of technological bona fides and offered a grave assessment of the country’s vulnerabilities to Chinese cyber-attacks.
“I cannot conceive of how more than 1% of us could possibly survive a cyberwar,” McAfee said.
Source: Read Full Article