Mutual funds (MFs) are investing in more stocks despite the recent volatility. The industry invested in 824 companies across the listed universe as of October, according to primemfdatabase.com.

The index has since corrected to 57,864, around 7 per cent below the peak.

Despite this correction, MFs have invested in 842 firms, the highest in at least 69 months, according to primemfdatabase.com.

There is also an increase in the pace at which new stocks have been added. The month-on-month change has nearly doubled from October (see chart 1).

MFs have seen steady inflows. Equity schemes saw Rs 19,705 crore in net inflows in February, according to the Association of Mutual Funds in India.

However, foreign portfolio investors (FPIs) have been net sellers to the tune of Rs 1.49 trillion in since October. Russia’s invasion of Ukraine, and expectations of monetary tightening by central banks is said to have affected sentiment.

The attendant volatility resulted in an erosion in the value of stakes.

MFs currently own 7.16 per cent stake in the listed universe, according to primemfdatabase.com. The peak was 8.81 per cent in April 2020 (see chart 2). 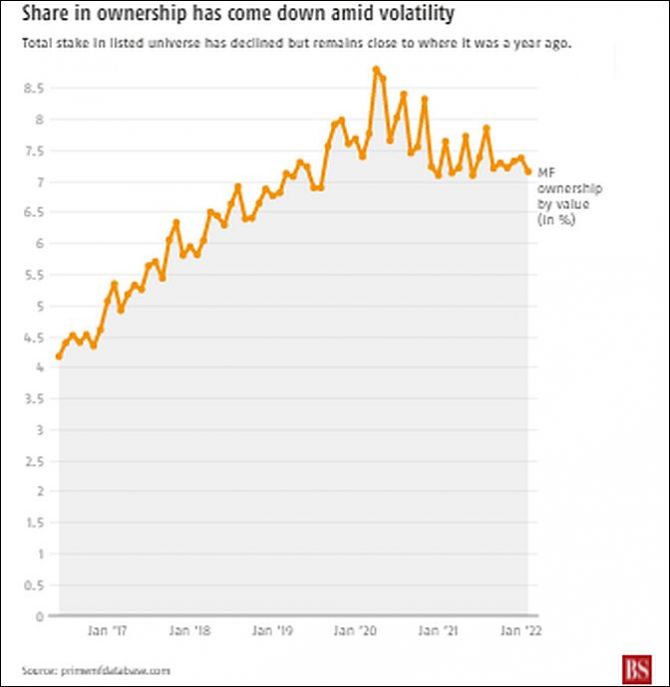 There has been a trend of investors coming in with more money during market corrections, rather than buying at a high and exiting when stocks crash, noted a February 24 ‘Mutual Fund Review’ from brokerage and financial services firm ICICI Securities.

The report noted that this reflects increased maturity among retail investors and that schemes investing in smaller companies have been popular.

“We remain optimistic on the Indian equity market, in general, and believe that from current levels, every dip is a buying opportunity in a staggered manner.

“Further fall or volatility in the near term cannot be ruled out given heightened uncertainty surrounding the geopolitical conflict… Corporate earnings, which is the ultimate barometer of the market performance, remains on track for a sharp recovery,” it said.

While lower gross domestic product growth has affected earnings estimates, they are still expected to compound at 22 per cent, according to a Morgan Stanley India report.