‘The news about the new virus strain in the UK provided them with an opportunity to take money off the table.’
Sunder Sethuraman reports. 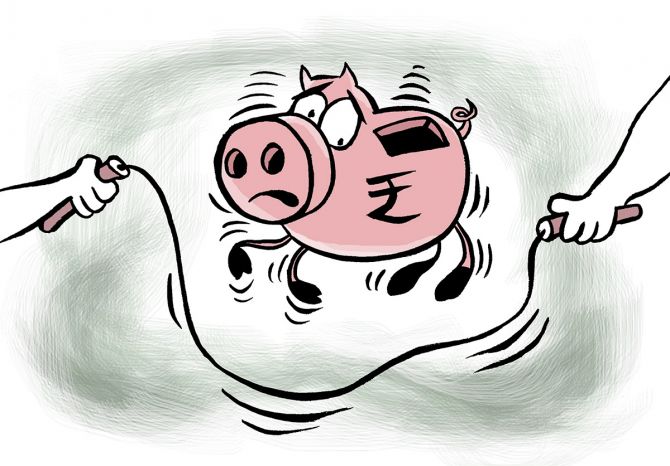 Global stocks tumbled on Monday amid panic selling as a new strain of coronavirus emerging from the UK led to fresh travel restrictions, casting a cloud over the prospects of economic recovery.

Monday’s fall saw investor wealth shrink by Rs 6.6 trillion, based on the market capitalisation of all listed companies on the BSE.

The new strain of the virus forced the UK government to impose fresh lockdown in London on Sunday, which requires more than 16 million Britons to stay at home.

Moreover, many countries, including the UK’s regional neighbours, suspended travel from the island nation. Experts warned that the new strain was 70 per cent more transmissible.

“The rally was a little overdone over the last couple of weeks, and investors were looking for a reason to book profits. We have seen many stocks with no credibility in the books running up, and this is a global trend. The news about the new virus strain in the UK provided them with an opportunity to take money off the table,” said Saurabh Mukherjea, founder and chief investment officer, Marcellus Investment Managers.

Analysts said the mutant strain of the virus was worrying investors who were counting on the roll-out of the vaccine, and raised concerns on whether the spread of the pandemic would be brought under control in the near future.

“There is worry amongst investors that the new strain of the virus could lead to lockdown across the globe during the holiday season,” said Andrew Holland, CEO, Avendus Capital Alternate Strategies.

The elevated levels of valuations in Indian equities also made investors turn cautious.

In a note to investors, Nomura said the Street’s earnings growth expectations were high and market valuations were at a peak at a time when prospects of growth revival weren’t robust enough.

“Further, the Street seems to be ignoring the potential impact of GDP contraction in H1FY21 on future demand. Despite favourable liquidity conditions, credit growth and spreads have not improved thus far,” Saion Mukherjee, head of India equity research, Nomura wrote.

The benchmark indices had risen more than 80 per cent from its March lows on the back of buying by foreign portfolio investors and due to optimism surrounding progress in vaccine trials in the last one month.

Jyotivardhan Jaipuria, founder, Valentis Advisors, said the market valuations were expensive and returns in the next few years would come from earnings growth.

“Investors hope that next year will be normal as people get vaccinated. If earnings growth is robust, then we could be looking at market returns which are in high single digits,” said Jaipuria.

Experts said measures taken by the Biden administration vis-a-vis tax hikes and stimulus, and the smooth roll-out of vaccination would determine the market movement.

“And lastly the US dollar affects the performance of emerging markets like India. If the dollar continues to depreciate, it’s good for India,” said Jaipuria.

Indian manufacturing companies like Tata Steel, UPL, SRF, Motherson Sumi, Balkrishna Industries and Tata Motors have exposure to Europe and the UK. Their stocks were down between 4.6 per cent and 9 per cent on Monday, much higher than the 3 per cent fall in leading indices.

As many as 466 stocks were locked in the lower circuit on the BSE on Monday. The market breadth was highly negative with total advancing stocks at 564 and those declining at 2,472 on the BSE.

All the BSE sectoral indices ended the sessions with losses. Infrastructure and Metal stocks fell the most, and their gauges fell 6.3 per cent and 6.1 per cent, respectively.

Analysts said the presence of highly leveraged stocks and fears of metal prices crashing led to the steep fall in these sectors.

“When the market falls, investors exit stocks which are unlikely to hold on to the gains. If there is an economic slowdown metal prices will crash,” said Siddhartha Khemka, head of research (retail), Motilal Oswal Financial Services.

Stock valuations were at 25 year high before Monday’s fall

Before Monday’s fall, the Nifty50 had rallied for seven consecutive weeks — one of its biggest winning streaks in nearly a decade.
Krishna Kant reports.

The gravity-defying run on the Indian bourses came to an abrupt halt on Monday as investors braced for a fresh round of economic disruption after a new fast-spreading strain of coronavirus was detected in the United Kingdom.

Many analysts believe a big correction was inevitable and the discovery of a new coronavirus strain was only a trigger.

Prior to Monday’s fall, the Nifty50 had rallied for seven consecutive weeks — one of its biggest winning streaks in nearly a decade.

The rally led to nearly 2,100 points, or an 18 per cent, rise in the index since the end of October.

“The fall was inevitable given record high valuation and almost one-way rally in the broader market in the past two months. The latest news from the UK was just an immediate trigger,” said U R Bhat, director, Dalton Capital Advisors.

The Nifty50 index ended Friday with a price-to-trailing earnings multiple of nearly 38x — the highest since 1999. Its cousin Sensex was valued at 34x its underlying trailing 12-months earnings per share (EPS) — most since December 1995.

At the close of trade on Friday, the Nifty was up 81 per cent from its March low, despite an 18 per cent decline in the index EPS during the period.

Its current EPS of Rs 364 is the lowest in nearly seven years and down nearly 20 per cent from the record high of Rs 450 before the pandemic in January this year.

After Monday’s fall, the Nifty closed the day with P/E multiple of 36.7x — the lowest in the last 10 days, but nearly 70 per cent higher than the historical average of around 22x.

Analysts said the growing mismatch between the stock prices and the underlying corporate profitability has raised downside risks for investors.

“The vulnerability of the market was high due to quick gains made in the ongoing rally, leading to low margin of safety,” said Vinod Nair, head of Research at Geojit Financial Services.

The fear is compounded by a sharp correction in commodity prices, including crude oil and industrial metals, as investors now worry about the pace of the global economic recovery after various countries imposed a ban on flights from the UK.

Metal and energy companies were the biggest gainers on bourses in the last two months driven by a rally in crude oil and industrial metal prices.

Not surprisingly, the metal and oil and gas index were the top loser on the bourses on Monday.