That’s not damning with faint praise: Mr. Saturday Night, the Broadway musical opening tonight at the Nederlander Theatre based on the 1992 comedy, is, at its best, a charming showcase for the undeniable talents of both Crystal and the showbiz icons he adores. There are shout-outs galore here to the likes of Milton Berle, Harry Ritz, Jack Carter, Phil Silvers, Myron Cohen, Moms Mabley, Shecky Green and more, and a lovely visual tribute (Scott Pask designed the attractive sets) to comedy and TV pioneers from Betty White and Phyllis Diller to Richard Pryor and George Carlin. Mr. Saturday Night, like its star, doesn’t hold back in paying its respects.

Even the story itself – about a once-popular 1950s comedian whose career self-sabotage has left him, in the 1990s, playing the community rooms of local retirement homes – taps into the lore of such early TV legends as Jack Paar, Arthur Godfrey and Sid Caesar. It’s a familiar tale, lovingly (perhaps too lovingly) re-told. 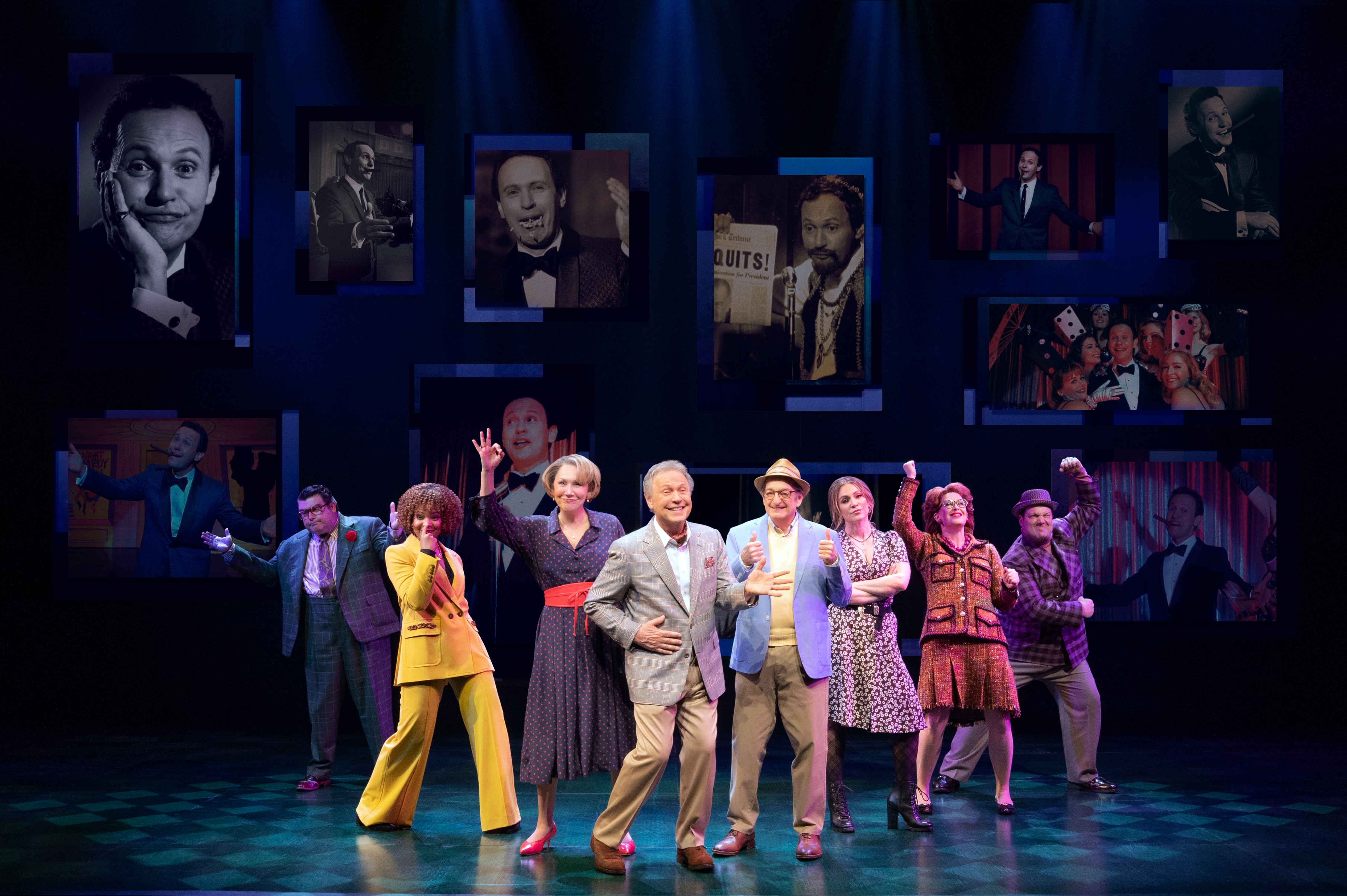 Padding the film’s storyline with an amiable if mostly unmemorable musical score – and performed, with one notable exception, accordingly – Mr. Saturday Night, directed with a steady hand by John Rando, tells the story of Buddy Young Jr., a Catskills comic who found national fame as the host of his own comedy-variety show until he aired some network grievances on live TV. From there it was a steady decline through b-movies, nightclubs and the requisite feeble attempt at a 1970s comedy album (Disco Jew).

Sticking with the temperamental, if good-hearted, Buddy through the years are his long-suffering manager-brother Stan (David Paymer, reprising his movie role), devoted wife Elaine (Randy Graff), and, to a lesser extent, daughter Susan (Shoshana Bean), who, at 40 and still finding her way, has never quite gotten over dad’s career-first negligence.

New to Buddy World is agent Annie Wells (Chasten Harmon), who gets stuck with the has-been by her higher-ups and sets about plotting a classic showbiz comeback. Think – as Buddy himself does – George Burns in The Sunshine Boys.

Despite Bean’s best efforts – she’s the show’s star singer – the father-daughter storyline just can’t support the weight its given, mostly because Crystal’s buddy never seems all that bad. We witness him slighting his daughter during one long-ago stage encounter, but the number of times middle-aged Susan storms out of the family home would seem to suggest a life spent with Joan Crawford (or at least Jerry Lewis). Crystal just doesn’t have it in him, even as Mr. Saturday Night cries out for some King of Comedy vitriol.

Better is the sibling friction Crystal and Paymer display, with the irresistibly sad-sack Paymer doing the forever-disappointed also-ran brother convincingly and appealingly. The chemistry between the brothers – or, more accurately, between real-life pals and long-ago co-stars Crystal and Paymer – is easily the most enjoyable thing in a generally enjoyable production.

The pleasant score by Jason Robert Brown and Amanda Green keeps things light, putting all that much heavier a dramatic burden on a book (by Crystal, Lowell Ganz and Babaloo Mandel) that can’t quite carry it. Buddy’s career comeback isn’t assured – and never entirely credible, come what may – but the familial reconciliations are as predictable and welcome as a joke that always makes you laugh.