Hong Kong (CNN)Myanmar’s military has such strong control over the country’s jade trade that it would be “nearly impossible” to buy the gemstone without enriching the generals and their allies, a new report said Tuesday.

Myanmar produces about 70% of the world’s jade, worth billions of dollars and fueled in large part by demand in neighboring China.
But the industry in Myanmar is wracked by conflict, corruption and environmentally destructive mining practices. Miners — often impoverished migrants who flock from other parts of the country — are at risk of death and injury from landslides. Exploitation, abuse and drug addiction are rife.

The new investigation “Jade and Conflict: Myanmar’s Vicious Circle” from Global Witness, a nonprofit dedicated to investigating corruption and environmental abuse, found the military, known locally as the Tatmadaw, tightened its grip on the lucrative sector in the years leading up to its February 1 coup.

The investigation, which builds on a landmark 2015 report, alleges the family of coup-leader and commander of the armed forces, Gen. Min Aung Hlaing, profited from bribes as corruption of the jade industry worsened in recent years.

“Our revelations about the military’s increased control of the multibillion-dollar jade trade is emblematic of the Tatmadaw’s broader capture of valuable sectors of the country’s economy, which funds their abuses, fuels conflict and helped enable their recent illegal power grab,” said Keel Dietz, Myanmar policy advisor at Global Witness and author of the report. 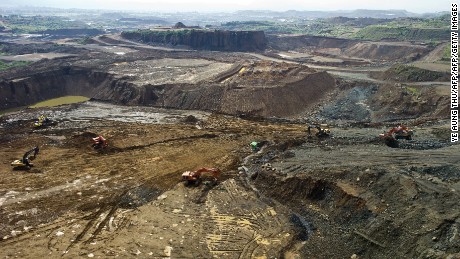 The coup has destabilized the industry further, Global Witness said, triggering renewed fighting in jade mining areas. The report also found that jade money was being directly channeled into the arms trade between several ethnic armed groups, fueling conflict in northern Myanmar.
It paints a picture of a lawless land where “men with guns” rule over a haven of dangerous, illicit and corrupt activity, and impose a “climate of fear and violence” over a region ravaged by war and fueled by jade.
Global Witness sourced its evidence through dozens of interviews with various people involved in the jade industry, including politicians, government officials, current and former Kachin Independence Organization officers and intelligence officials, military officials, jade traders and businessmen, civil society representatives and others, as well as documents and media reports.
CNN cannot independently verify the claims in the report. CNN has reached out to Myanmar’s military for comment on the claims.

When it took office in 2016, Aung San Suu Kyi’s civilian-led National League for Democracy (NLD) government attempted to reform the jade industry by suspending licenses for mining, drafting a new gemstone law and trying to improve transparency.
The report found that those reforms fell short, facing fierce opposition from the military and gemstone sector. It also shows that the military and ethnic armed groups rushed to exploit a power vacuum left by the stalled reform process to further their control over the business.
A jade rush emerged after that election. Bitter foes that spent decades fighting each other cooperated to extract as much jade as they could before the licenses expired, the report said.
The military, and several major ethnic armed groups including the Kachin Independence Army (KIA), the United Wa State Army (UWSA) and Arakan Army (AA), as well as smaller actors, joined forces to facilitate illegal mining, bribery and smuggling, Global Witness said. 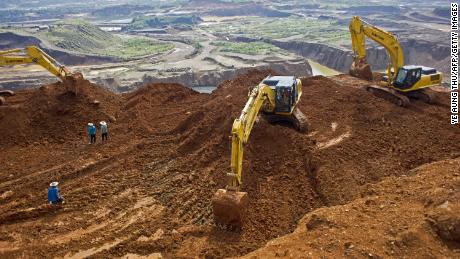 “The Tatmadaw, armed militias, and ethnic armed groups such as the KIA, UWSA and AA literally found common ground to dig up jade ever faster and more destructively, even as they were in conflict elsewhere in the country,” said Dietz.
Even though fighting between the military and ethnic rebel groups, including the KIA and AA, was ongoing in other parts of Kachin state and the country, the report said the mining area of Hpakant remained relatively free of large-scale conflict, underscoring the complex and often transactional nature of these relationships.
That all changed following the coup, according to the report, as fighting broke out across Kachin state including clashes in and around Hpakant itself.
The result of the frenzied race to dig up jade was that companies increased their dangerous mining practices and cut corners on safety in the jade mining area of Kachin state’s Hpakant, leading to “serious accidents and loss of life among artisanal miners.”
Before the coup and Covid-19, up to 400,000 freelance miners, known locally as yemase, traveled to the region every year to seek their fortune in the mines. Landslides and other fatal accidents were already common in Myanmar’s perilous gemstone mines, but the report found accidents have worsened over the past five years, due to lax regulations and reckless mining such as dumping waste on-site and causing plots to destabilize.
The result has been devastating. Massive landslides in April 2019 and July 2020 killed more than 200 people combined.

Corruption stretches to the top

The industry has long been plagued by allegations of corruption and wrongdoing, with profits flowing to armed groups and political elites without being taxed and helping to fuel the long-running conflict in the country’s north. Some of the mines are run by armed groups fighting the military and local drug lords, according to international observers, though many exist in areas controlled by Myanmar authorities.
Global Witness claimed it uncovered evidence suggesting members of coup leader Min Aung Hlaing’s family personally profited from the illicit economy.
“If true, this is a brazen display of corruption that rings alarm bells about the sector’s future in the hands of Min Aung Hlaing,” the report said. 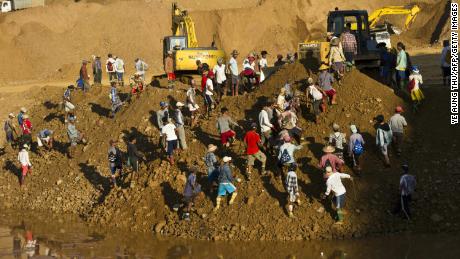 Now with the military and Min Aung Hlaing in control of the country, Global Witness said the coup has provided the general and his family with a “blank cheque to turn the sector into a treasure trove for themselves.” It said the jade industry risks becoming a “slush fund and source of political patronage to prop up the military regime following the coup.”
“Min Aung Hlaing is a man who has presided over some of the worst crimes against humanity the world has seen in recent years, and now he has led a coup that has plunged Myanmar into a crisis that risks returning the country to the darkest days of military rule,” said Dietz.
Min Aung Hlaing was already under US sanctions for his role in the campaign of ethnic cleansing against the Rohingya ethnic minority in 2017. Following the coup, the US Treasury Department placed further sanctions on the coup leader and his children, including on some military companies involved in the gemstone industry.
Various sanctions against the general, and other members of the military, have been imposed from the European Union and countries including the United Kingdom, Canada, Australia and New Zealand.

While conflict and jade mining has long been intertwined, the report found that almost every armed actor in Myanmar’s north — the military, several major and minor ethnic armed groups, and border guard forces — profit from jade money that was directly used to buy arms.
The industry has also helped facilitate the rise of another armed group, the Arakan Army, which was involved in some of the worst fighting with the military in recent decades from late 2018 and has become a “significant new player” in the jade sector, the report said.
Global Witness said with jade money funneled to conflict or gained through smuggling, Kachin state’s resources are being “plundered” with little benefit going to the local Kachin people.
The report estimates that up to 90% of Myanmar’s jade is smuggled out of the country, almost all of it to China — obscuring the true value of Myanmar’s jade industry. It found jade smuggling rose by 50% to 80% after the NLD’s license suspension. 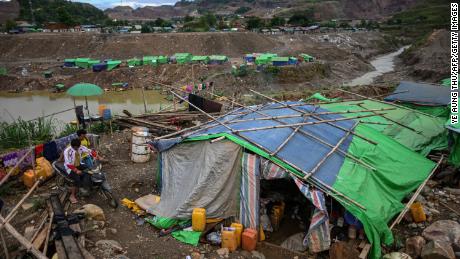 Following the military coup, hopes for real reform of the sector have been quashed, the report said.
“The NLD’s reform program is now dead. Moreover, the coup has triggered an explosion of violence in Myanmar’s jade mining regions as the Tatmadaw and the KIO/A engage in heavy fighting around Hpakant and Hkamti,” the report said.
The military junta faces widespread public opposition as it attempts to assert its control over the country by using deadly force to crush anti-coup dissent. It is facing renewed armed resistance both from ethnic groups and growing people’s militias.
Global Witness called on the international community to ban the import of all jade and gemstones mined in Myanmar and adopt policies that would limit the military’s ability to profit from the jade sector and other natural resources.

“As the people of Myanmar risk their lives to stand up to the military regime, the priority for the international community right now should be bringing an end to the coup … A crucial part of this is cutting off the financial flows to the military through targeted sanctions on their economic interests, including the jade sector,” said Dietz.
“There will be no peace or democracy as long as men with guns control the vast wealth generated by one of Myanmar’s greatest natural treasures.”
Source: Read Full Article

US trucker shortage means everything is more expensive

Watch Yellen warn Congress: This could have ‘catastrophic economic consequences’

This is why your next car, cheese party or refrigerator could be in peril

Wall Street wants employees back in the office

The Federal Reserve to raise interest rates sooner than expected

Biden announces steps to reduce racial wealth gap in US

US consumer prices keep going up

‘This is historic progress’: Biden on new jobs added in May

Millions of jobs and a shortage of applicants. Welcome to the new economy

There’s a problem at James Hook’s chicken farms, and it has nothing to do with poultry.

P.D. Hook, a hatchery that supplies one third of the chickens sold in the United Kingdom, should be humming along as the economy roars back to life. But the company is short about 40 farm workers, double the usual number of vacancies.
At the same time, there’s a severe deficit of truck drivers, making it difficult for P.D. Hook to transport its birds to the factories where they are cut, portioned and packed. And when the chickens do arrive, there’s a shortage of staff at the processing plants, too.
“It’s all come together at a time when everybody wants more of everything,” said Hook, the company’s managing director. “It’s a perfect storm.”
The troubles aren’t unique to P.D. Hook, its industry or the United Kingdom. Around the world, airlines, restaurants and hotels can’t fill open jobs, stymieing efforts to capitalize on resurgent consumer demand. Many workers that went home when the pandemic hit haven’t returned to shipyards, factories or construction sites, hitting production and stalling projects. Even Michelin-starred eateries and Wall Street banks say they can’t hire enough people to meet their needs.
A waiter cleans a restaurant table ahead of reopening in Berlin, Germany, on May 21, 2021.