Having fun is just too expensive for lots of Americans.

That’s according to new research from personal-finance website Bankrate, which surveyed more than 2,500 U.S. adults, aged 18 or older, about their financial situation. A whopping 68 percent said they’ve skipped out on certain recreational activities in the past year because they couldn't afford it.

Most said they had little or no room in their budget for things like vacations or music festivals after paying bills, some said they were busy saving for other things and many said they’re struggling to pay down lingering debt from credit cards and student loans.

Taking a vacation was the first activity on the chopping block. Of the survey respondents, 42 percent opted out of traveling and staying somewhere overnight because of costs. A third, or 32 percent, sacrificed going to a concert or live arts event, and 28 percent even skipped dining out with family and friends.

About a quarter of Americans gave up going to an amusement park, aquarium or zoo, another quarter skipped attending a professional sports game and a final 25 percent passed upon going to the movies. 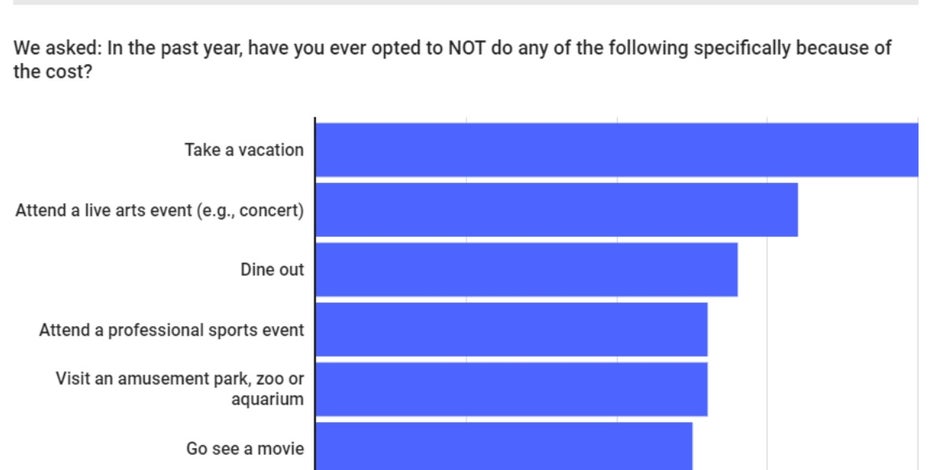 Those in Generation X were most likely to pass up a fun opportunity, as 47 percent said they didn’t have splurging money after covering other important expenses. That’s compared to 45 percent of millennials and 33 percent of Baby Boomers. And for adults with children, the burden was even worse: 76 percent of parents with young children (aged 18 or younger) say they’ve skipped extra-circular affairs in the past year, versus 66 percent of non-parents.

For younger Americans, student loan debt, along with everyday bills, were the biggest culprit: One in five said loans kept them from splurging on other things. Borrowers owe more than $1.5 trillion in student loans, and that debt isn't just impacting vacations, it's impacting their retirement plans, too. MIT research shows a whopping 84 percent of adults said that student loans are hindering their ability to save, while 26 percent said they aren’t saving for retirement at all.

The news isn’t all bad, though. While 28 percent of respondents said their ability to afford something like vacation is less than it was five years ago, 29 percent say it’s the same, and 26 percent say they’re actually better financially equipped to cover a getaway now than they have been in the past few years. About a quarter, or 24 percent and 22 percent, said they can now better afford an arts or sports event, receptively.

And keep in mind, “across the country, actual experiences vary with respect to individuals’ personal finances,” Mark Hamrick, Bankrate’s senior economic analyst, pointed out. “For some, the challenges involve their employment status and the level of their incomes.”