New York (CNN Business)A truck with the doors duct-taped on. Ford pickups masquerading as something else. The head of a company running to google whether or not the thing he had just promised inventors was even physically possible. These are some of the wildest allegations from charging documents filed this morning against Trevor Milton, the founder and former chairman of electric-and-hydrogen vehicle company Nikola. The US Attorney’s office for the Southern District of New York alleges that Milton deceived investors about the nature and progress of Nikola. Milton’s legal team, in response, released a statement saying he is “innocent” of the allegations and that “justice was not served by the government’s action today, but it will be when Mr. Milton is exonerated.” 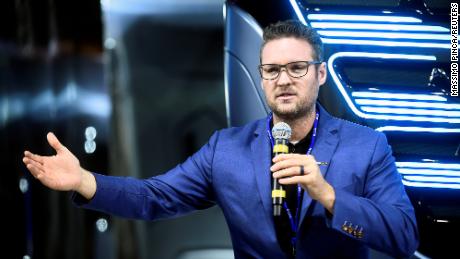 Before Milton’s resignation in September 2020, investors jumped on Nikola in the hopes that it could be a new Tesla. Valued as much as $26 billion after it initially went public, while its revenue was less than $100,000, it even had a partnership with venerable automaker GM (which GM later pulled out of). But allegations of impropriety began to mount, especially from research firm and shortseller Hindenburg Research, which kick-started Milton’s problems by questioning a video Nikola had released that was supposedly of its “fully functioning” prototype truck but turned out to have been a non-functional truck rolled down a hill. Milton quit and the investigations started to pile up.

Below, some of the more eye-popping allegations from the indictment.

The company’s prototype for its hydrogen truck, the NIkola One, allegedly did not work at all, but rather had to be rolled down a hill, and the door had to be held on with tape:
“In or about 2017, a representative of a large multinational corporation approached Nikola and asked to use the Nikola One in a commercial celebrating innovation. The concept for the video included a shot of the Nikola One coming to a stop in front of a stop sign. In order to accomplish this feat with a vehicle that could not drive, the Nikola One was towed to the top of hill, at which point the ‘driver’ released the brakes, and the truck rolled down the hill until being brought to a stop in front of the stop sign. For additional takes, the truck was towed to the top of the hill and rolled down the hill twice more. Additionally, the Nikola One’s door, which had been constructed using minivan parts, had to be taped up during the shoot to prevent it from falling off.” 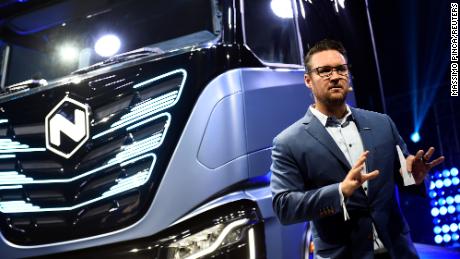 Among Milton’s alleged victims weren’t institutional investors who knew what they were doing, but small investors looking for a lifeline in a pandemic:
“Among the retail investors who ultimately invested in Nikola were investors who had no prior experience in the stock market and had begun trading during the COVID-19 pandemic to replace or supplement lost income or to occupy their time while in lockdown. The value of Nikola’s stock, including stock held by retail investors, plummeted after certain of MILTON’s statements were revealed to be false and misleading. As a result, some of the retail investors that MILTON’s fraudulent scheme targeted suffered tens and even hundreds of thousands of dollars in losses, including, in certain cases, the loss of their retirement savings or funds that they had borrowed to invest in Nikola.” 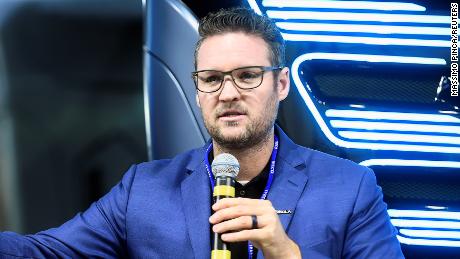 Milton allegedly falsely claimed that the company’s prototype, the Nikola One, functioned in any way:
“During that event and later, TREVOR MILTON, the defendant, claimed that the prototype Nikola One was a fully functioning truck, and emphasized that early purported success as a defining event for Nikola. For example, MILTON stated during the March 3, 2020 pre-recorded merger announcement conference call for Nikola’s merger with VectoIQ: ‘I founded the company to completely disrupt the energy and transportation market. When our company first announced the Nikola One Semi truck in 2016, most other brands said zero emission would never work. WOW, were they wrong.’ […] Contrary to what TREVOR MILTON, the defendant, claimed, Nikola had not successfully reached the milestone of creating a fully functioning prototype at the Nikola One launch event on December 1, 2016. In fact, the Nikola One prototype was not completed, let alone tested and validated, by the time of the unveiling event.”
But:
“[T]he prototype was wholly missing significant parts, including gears and motors, and the control system (i.e., the system that communicates the driver’s directions to the vehicle) was incomplete. The infotainment system in the cab was also incomplete. Instead, for the purpose of the unveiling event, tablet computers or other computer screens were mounted into the areas where the screens for the infotainment would be, and the screens were set to display images created to have the appearance of infotainment screens, with speedometers, maps, and other information displayed. Further, the truck was towed onto the stage at night prior to the event, and the screens and lights were powered by an external battery and a power cord running under the truck to the wall, which had to be manually disconnected as the stage spun. Similarly, an air line had to be connected to the vehicle to keep the truck’s air suspension and air brakes working, because there was a slow leak in the truck’s air supply.” 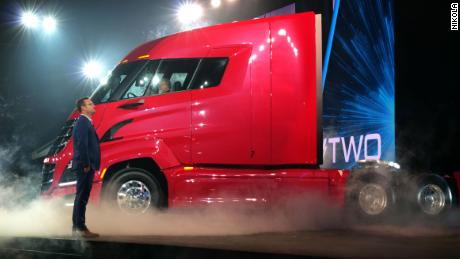 Still, the prosecutors allege that did not stop Milton from telling investors otherwise:
“[O]n or about December 1, 2016, TREVOR MILTON, the defendant, falsely claimed that the Nikola One was fully functioning and could be driven. For example, MILTON stated, ‘We will have a chain on the — on the seats to prevent people from coming in just for the safety . . . so we’re going to try to keep people from driving off, but this thing fully functions and works, which is really incredible.'”
Despite the investor event “unveiling” the prototype, once the show was over, Milton allegedly pulled the proverbial plug:
“Following the 2016 unveiling of the Nikola One, TREVOR MILTON, the defendant, determined not to complete the prototype, and no further substantial engineering was undertaken. The truck was never completed and has never been operable.”
The indictment alleges that Milton repeatedly said Nikola’s Badger pickup truck was a “ground up” and “clean sheet” design, and that prototypes had been built, but in reality, the “prototypes” were just disguised Fords:
“[I]n or about March 2020, TREVOR MILTON, the defendant, directed a small group of Nikola employees to build Badger prototypes. However, because the Nikola employees were focused on other Nikola development projects, the production of Badger prototypes was outsourced, at MILTON’s direction, to third parties, with one vendor contracted to create the upper body of the vehicles, and another to build the chassis. Neither component was being built from the ground up. Rather, Nikola purchased several Ford F-150 pickup trucks — a highly popular model to which MILTON had claimed his Badger would compare favorably — to use as ‘donor’ or ‘surrogate’ vehicles, and used the vehicles’ chasses and bodies as the base for constructing the Badger prototypes. At MILTON’s direction and with his approval, engineers working on the Badger prototypes took steps to hide from the public that Ford donor vehicles were used to produce the prototypes.” 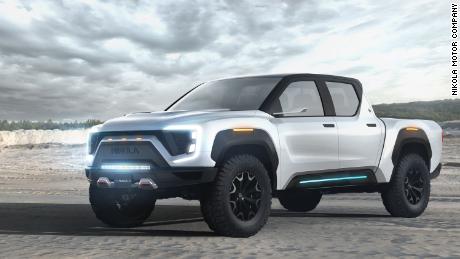 About a month after Nikola engineers allegedly started dressing up Fords, Milton publicly dismissed anyone who would attempt such a thing:
“For instance, during a podcast interview on or about April 20, 2020, a link to which MILTON subsequently tweeted, MILTON stated, ‘we built this thing to be a true vehicle,’ it is based on a ‘billion dollars of knowledge’ from Nikola’s semi-truck program, the ‘truck can go 700 miles in a real environment,’ and it can ‘whoop a Ford F-150 . . . whoop a Silverado . . . whoop a Dodge Ram.’ MILTON promised that at the truck’s unveiling he would show off a ‘real truck’ that is ‘fully functioning,’ not one of those ‘pushers everyone puts out there as a fake vehicle to show everyone what they’re doing.’
Milton promised that the pickup truck would have its own water fountain, equipped with nothing but the water generated by the vehicle’s hydrogen fuel system. After saying so, Milton allegedly then went to the internet to search for whether or not such a thing was even possible:
“On or about June 25, 2020, TREVOR MILTON, the defendant, issued several tweets making claims about how the Badger would use the water created as a by-product of the hydrogen fuel cell. In particular, MILTON tweeted that the Badger uses ‘most all of it for our windshield washer fluid and . . . a little bit for clean, pure, drinking water.’ Approximately several minutes later, MILTON tweeted, “Yes you heard that right, we will have a drinking fountain in our truck using the hydrogen bi product water for the drivers to have nice cold, clean, pure drinking water.” In fact, at that point, MILTON had not discussed with Nikola’s engineers the idea of using fuel cell by-product as washer fluid or drinking water, and several days later attempted to determine if it was even possible by searching on the internet, ‘can you drink water from a fuel cell?'”
The US Attorney’s office is requesting that Milton’s Nikola-derived money be seized as a result:
“As a result of committing one or more of the offenses charged in Counts One through Three of this Indictment, TREVOR MILTON, the defendant, shall forfeit to the United States, pursuant to Title 18, United States Code, Sections 981(a)(1)(C) and Title 28, United States Code, Section 2461, all property, real and personal, that constitutes or is derived from proceeds traceable to the commission of said offenses, including but not limited to a sum of money in United States currency representing the amount of proceeds traceable to the commission of said offenses that the defendant personally obtained.”
Milton’s legal team issued a statement in response to the allegations:
“Trevor Milton is innocent; this is a new low in the government’s efforts to criminalize lawful business conduct. Every executive in America should be horrified.
Trevor Milton is an entrepreneur who had a long-term vision of helping the environment by cutting carbon emissions in the trucking industry.
Mr. Milton has been wrongfully accused following a faulty and incomplete investigation in which the government ignored critical evidence and failed to interview important witnesses.
From the beginning, this has been an investigation in search of a crime. Justice was not served by the government’s action today, but it will be when Mr. Milton is exonerated.”
In response to an inquiry from CNN Business, Nikola re-directed all questions to Milton, and issued the following statement:

Trevor Milton resigned from Nikola on September 20, 2020 and has not been involved in the company’s operations or communications since that time. Today’s government actions are against Mr. Milton individually, and not against the company. Nikola has cooperated with the government throughout the course of its inquiry. We remain committed to our previously announced milestones and timelines and are focused on delivering Nikola Tre battery-electric trucks later this year from the company’s manufacturing facilities.
Milton’s legal team did not immediately respond to a request for comment on the specific allegations in the indictment. You can read the rest of the indictment here.
Source: Read Full Article