Home » Business » ‘OnlyFans is ripping me off by capping prices’

Actress Bella Thorne has been embroiled in a controversy over selling $200 (£149.70) nude photos on OnlyFans that were not as described.

Her actions on the subscription content platform resulted in OnlyFans placing a cap on the prices creators can charge.

The former Disney actress issued an apology to content creators, who say their incomes will be impacted.

However OnlyFans told the BBC pricing changes had “been in the pipeline for a while”.

OnlyFans has become popular as a platform where content creators can post premium provocative and intimate photos, videos and text messages. OnlyFans takes a 20% commission on each transaction.

The platform has 60 million users and 750,000 content creators globally, according to most recent data.

While some content creators are sex workers, many others are models, dancers, singers, musicians and comedians who do not produce any content featuring nudity. 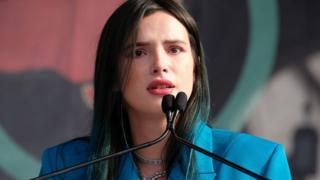 Over the weekend, OnlyFans saw a backlash from its content creators after changing the limit on each tip and paid post from $200 to $100 per item. Previously, content creators could charge any amount they liked.

“Spending limits are in place to protect all OnlyFans users and to allow them to use the platform safely,” said an OnlyFans spokeswoman. “The newly introduced limits on tips and paid posts is a change that has been in the pipeline for a while, and has not been implemented in response to any one creator or fan.”

The platform added that it made changes to its policies “with the safety and support” of its users and content creators in mind.

‘She has no right to speak for us’

Ms Thorne, 22, broke records on OnlyFans when she signed up for an account last week, gaining over 50,000 followers and earning $2m within a week by charging $200 for supposedly nude photos.

But she was not nude in the photos, and thousands of her subscribers demanded refunds from the platform.

Ms Thorne apologised to content creators on Saturday 29 August, claiming in a series of tweets that she wanted to “remove the stigma behind sex work”.

She also told Los Angeles Times that she was researching a new role for a film being made by director Sean Baker, but he has denied being involved in any projects with the actress.

Ms Thorne further angered content creators by saying she was meeting with OnlyFans to discuss the price caps on their behalf, when many say their own requests for clarification on the issue have been ignored by the platform.

“Bella Thorne has no right to speak for us and could never know the daily challenges we face every day,” Stephanie Michelle, a professional cosplayer based in Los Angeles told the BBC.

Ms Michelle has 550 fans and makes $8,000 a month, charging a $30 subscription fee to users. She also relies on tips ranging from $5-$200 for pay-per-view photos, videos and text messages.

She says her OnlyFans work is the only way she can support her family due to the pandemic, and fears many other content creators will struggle to make ends meet going forward.

Kelly Jean, a London-based professional cosplayer and Twitch streamer, has 4,600 followers on OnlyFans.

She is on many social media platforms and uses OnlyFans as part of maintaining her following, by offering $10 sets of sexy modelling pictures as digital merchandise to her fans.

“It’s going to make people more suspicious of my content, but we can hope Bella Thorne is bringing more people to the platform and normalising it for others who don’t do nude content like me,” she said.

OnlyFans says a record number of people applied to become content creators on the platform in the last week after Ms Thorne joined it.

‘OnlyFans is ripping me off’

Irina is a cosplayer and model living in Belarus, with 35,700 followers on OnlyFans. Due to the pandemic, she depends on the platform for 90% of her income.

She charges up to $40 for lingerie pictures and videos or for content that implies nudity; $165 for topless photos and $200 for nude images and videos.

“I feel OnlyFans is ripping me off,” she said. “I will lose around $2,000 a month from my income because I can’t take any custom requests now as they are priced higher than usual content. With a maximum tip of $100 it’s hard to explain to people why they need to tip multiple times.”

Erika Heidewald, an actress and musician in Los Angeles, has only 317 followers.

She explains that there are many different business models on OnlyFans because people have wildly varying requests, and the sky’s the limit when it comes to creativity.

“A lot of the large creators have lower prices because they have so many subscribers to buy those items, but most small creators rely on a limited number of loyal subscribers. They might only sell a couple videos a month, but they’re worth enough that it’s a life-saving amount of money,” she told the BBC.

“Lowering the price ceiling limits our money as well as cheapening the value of individually-produced content.”

Another bone of contention is the fact that OnlyFans previously promised creators that if they referred new influencers, they would be entitled to receive 5% of their income for the foreseeable future.

“I feel slightly used by OnlyFans,” said Kaya Corbridge, 23, a sex worker from Lancashire who has made $1.1m on the platform over the last three years and now owns her own home.

Ms Corbridge offers services ranging from $7-$25 “personalised penis ratings” and text chats charged at between $3-$300, to custom videos costing $50 a minute and even a $1,000 package where a user can control what she does for a day. She has 1.2 million followers on Only Fans.

“When I started, I signed up over 500 content creators and trained them up, offered them support, promotion and even a guide book that I created on the promise and contract that I would get 5% of their earnings for life,” she says. “So many of us have spent years training up our future competition.”

Ms Corbridge estimates she will lose $12,000 a month due to the referral fees policy change. She and Irina are now considering moving to other platforms.

According to digital content marketing expert Simon Penson, many technology platforms have built their success by attracting influencers with lucrative monetisation offers, and then “moved the goal posts” later on.

“Facebook did this, and we always saw it with influencers on YouTube too,” said Mr Penson, who founded Zazzle Media, one of the pioneers of the digital content marketing industry in 2009.

“The biggest guys had enough reach to negotiate with the social media platforms for bespoke deals.

Content creators can’t yet turn their backs on online platforms as they need to reach audiences, but Mr Penson says things are changing.

“We’re starting to see an era whereby influencers, rather than relying on social media platforms for monetisation, they’ll move towards technology platforms like Patreon, OnlyFans and VuePay, which provide the technology rather than the audience.

“Influencers do have greater power than they used to have – they can utilise their influence to push their fans to the places they want to be.”