The legendary investor now wants to replace Occidental’s entire 10-person board of directors, a person familiar with the matter told CNN Business. Icahn was previously only pushing to replace four members of the oil giant’s board.
Icahn’s stepped-up proxy fight includes a bid to remove Vicki Hollub, the oil giant’s CEO, from her seat on the board, the person said.

If Icahn’s slate of directors wins election, they would probably quickly oust Hollub, who is under fire for Occidental’s sinking stock price and risky takeover of rival Anadarko Petroleum. Icahn has repeatedly slammed Hollub, though he has stopped short of calling on her to be removed as CEO. 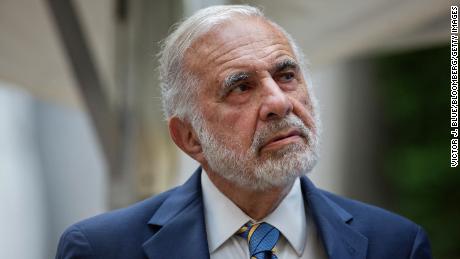 The escalation shows how Icahn is not backing down from this battle even after he recently disclosed selling a third of his stake in Occidental because of concerns about the oil company’s debt-riddled balance sheet.

Occidental did not respond to a request for comment. Icahn’s representatives declined to provide a comment on the news, which was first reported by Bloomberg News.
It remains unclear whether Icahn will be able to persuade enough disgruntled Occidental shareholders to oust the board of directors. Icahn himself has acknowledged it will be a challenge, telling CNN Business earlier this month that he might sell more shares if he doesn’t think he can win the proxy fight.

Occidental has lost a third of its value this year

Despite shrinking his position, Icahn still owns about 23 million shares in Occidental, a stake valued at about $925 million at current prices. Icahn remains one of Occidental’s largest shareholders, a position he seems uneasy with given the company’s pile of debt.
“Owning this company, and being at the mercy of a board and CEO who have already shown they are willing to take inordinate risks and gamble stockholders money to further their own agendas, is extremely dangerous for an investor,” Icahn recently told CNN Business.
Occidental’s stock has plunged 35% this year, trailing the 20% decline in the SPDR S&P Oil & Gas Exploration & Production ETF (XOP). Rival ConocoPhillips (COP) is down just 4%, while Chevron (CVX) has rallied 9%.
The clash between Icahn and Occidental is squarely focused on Hollub’s victorious bidding war against Chevron for control of Anadarko. That controversial deal, valued at about $58 billion including debt, is the second-biggest takeover of a US oil-and-gas company ever, according to Dealogic.
Icahn has slammed Occidental for borrowing too heavily to acquire Anadarko, arguing the deal leaves the company too exposed to a crash in oil prices. The activist investor is particularly irked by the generous terms Occidental offered Warren Buffett’s Berkshire Hathaway (BRKA), which agreed to provide $10 billion in equity financing to support the takeover.

Paying down debt by selling assets

But Occidental has defended the logic and terms of the Anadarko deal.
By acquiring its rival, Occidental has doubled down on America’s shale oil boom, gaining an even larger foothold in the attractive Permian Basin oilfield of West Texas. If oil prices climb, Occidental has said it will reap enormous benefits from this additional scale.

Occidental has also acknowledged the risks posed by the debt it had to take on to pull off the deal. Hollub has promised to fortify its balance sheet by slashing capital spending and unloading enough assets to raise $10 billion to $15 billion. Occidental recently said it’s on track to exceed $15 billion in asset sales by mid-2020.
“We’re very intent on ensuring that we get the asset sales done because we believe we must get our debt down,” Hollub told analysts during a conference call earlier this month.
Source: Read Full Article