A third of the total restaurant market in India – valued at Rs 4.25 trillion – could be wiped out in the current financial year, since many players have simply been unable to sustain operations in the absence of customers. The global restaurant industry was in for a surprise recently with fast-food giant Pizza Hut announcing it would shut 300 outlets in the US, following the bankruptcy of a key franchisee there.

While the Indian unit of Pizza Hut, which has over 430 stores in the country, has not announced any closures, experts say large, organised players are beginning to feel the heat of the Covid-19 pandemic.

The reason: People are keeping away from out-of-home shopping and eating.

“So far, smaller players were shutting down.

“The trend that I now see is of larger players trying to rationalise their store footprint,” says Anurag Katriar, president, National Restaurant Association of India.

Katriar estimates that a third of the total restaurant market in India – valued at Rs 4.25 trillion – could be wiped out in the current financial year, since many players have simply been unable to sustain operations in the absence of customers.

Amost 60 per cent of the total restaurant market in India remains unorganised, and only 40 per cent is organised.

Though store closures have been rampant in the unorganised market since the pandemic and lockdown began in March, organised players, too, are now shutting unprofitable outlets.

While night curfew has been removed after Unlock 3.0, not permitting alcohol to be served at restaurants is a concern, say experts.

Almost 60-70 per cent of restaurants and bar owners in Delhi, for instance, have not renewed their licences yet owing to curbs on on-premise alcohol consumption, analysts say.

Restaurants in Mumbai continue to remain shut due to concerns around safety. 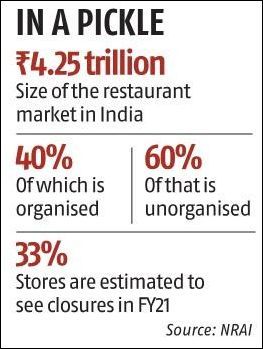 Riyaaz Amlani, chief executive officer, Impresario Entertainment and Hospitality, which has brands such as Social and Smoke House Deli, says two to three outlets out of its 50 stores have been closed in the past few months as part of restructuring.

“If restaurant owners have to keep the profitable stores going, the ones not performing will have to go.

“There are simply no choices left. The question is about conserving cash and deploying it at those locations and outlets that show business potential,” Amlani says.

Some experts argue that delivery sales are compensating for the loss of dine-in business to some extent at large outlets, but Katriar says small and medium operators are not geared for this.

Even large outlets, he says, are feeling the pressure, since dine-in remains a significant part of the traditional restaurant business.

Industry estimates peg the share of dine-in sales at 65-70 per cent and delivery sales at 30-35 per cent of total sales for a restaurant.

“The point about delivery works well for the quick-service restaurants, but even they are keeping a close watch on their overheads.

“All players are reorienting themselves to make dine-in safe because getting back these consumers will be critical to the business,” Katriar says.

But, in a recent conversation with Business Standard, Amit Jatia, vice-chairman, Westlife Development, which runs McDonald’s stores in the west and south of India, had said western quick-service restaurants would be the first to recover from the pandemic, since their ability to adjust to the new normal was ahead of the rest.

Food delivery and restaurant discovery firm Zomato also came out with a report on Wednesday saying 40 per cent of dine-in restaurants may not reopen at all owing to the disruption caused by the pandemic (see chart). 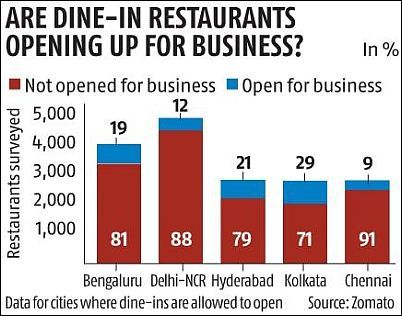 Presently, just 17 per cent of the dine-in restaurants are open for business, it found, while another 43 per cent are expected to open once the situation becomes better.

Of the cities where restaurants are allowed to open, data showed Kolkata is leading the pack with 29 per cent of its total restaurants opened followed by Hyderabad at 21 per cent.

Around 60 per cent restaurateurs said they estimate to retain less than half of their original business volumes for a few months even in the post-Covid phase, the report said.

The situation was much better for food delivery segment, which Zomato said, has “largely recovered” with the overall sector clocking 75-80 per cent of the pre-Covid gross merchandise value.