President Joe Biden marked the signing of a gun safety bill, passed in the aftermath of recent mass shootings.

But even as lawmakers, gun reform advocates and victims’ families at the South Law ceremony said that the new legislation would be meaningful, it falls short of laws that were in place in the past, like an assault weapons ban, or even a ban on purchases of those firearms for those under 21. 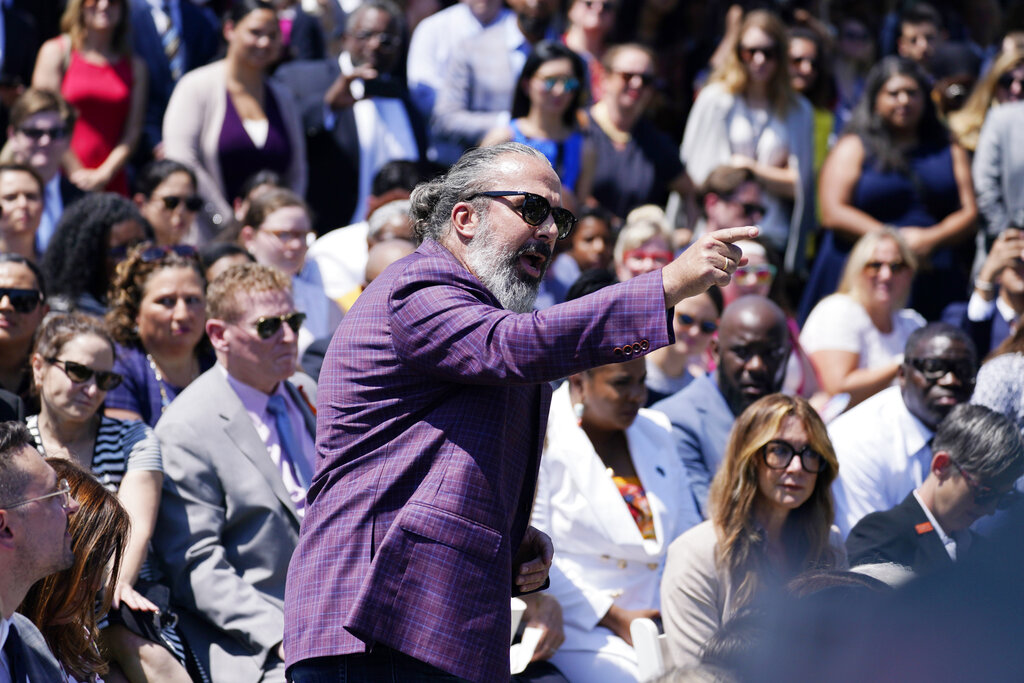 The activism and urgency for far more significant measures was evident when Biden’s speech was interrupted by Manuel Oliver, whose son Joaquin was killed in the 2018 Parkland, FL shootings. Oliver could be heard shouting, “I have been trying to tell you this, for years,” and Biden then said, “Let him talk. Let him talk.” Oliver, who founded the group Change the Ref and is calling for much greater measures, was then escorted away.

.In his speech, Biden called for an assault weapons ban and universal background checks. But those measures are out of reach in Congress because of opposition from Republicans. Biden signed the Bipartisan Safer Communities Act last month. The law is the result of negotiations following the shooting massacres in Uvalde, TX and Buffalo, NY, expands background checks for those 18 to 21, give incentives to states to pass “red flag” laws, and expand a federal law that bans domestic abusers from acquiring guns. The legislation also provides funds for school safety and for mental health.

The ceremony at the White House was held almost a week to the moment when a shooter opened fire on a Fourth of July parade in Highland Park, IL, killing seven people. Biden noted the presence of the mayor of Highland Park and the state’s governor, J.B. Pritzker.

“Can this really be the United States of America? How has it come to this?” Biden said in his speech. “We all know some of the reasons — the gun lobby, the special interest money, the rise of hyper partisan tribal politics in the country.”

Biden said that he is a supporter of the Second Amendment, and owns four guns, but that the right to bear arms is not absolute.

“The right to bears arms is not a right that dominates all others,” he said.

Although he was present at the event, Oliver has been critical of characterizing the White House ceremony as a celebration. It drew hundreds of guests to the South Lawn, and at the end of the president’s speech, the Marine Band played Stars and Stripes Forever. But the presentation itself still was shorter and somewhat more muted that past ceremonies marking milestones for the administration, including passage of the infrastructure law last year and the confirmation of Ketanji Brown Jackson to the Supreme Court.