Reliance announced energy asset sales worth around $ 16 billion; end of the investment cycle in telecom; bringing net-debt to zero in 18 months; value-unlocking options for real estate and financial assets; listing of telecom and retail in five years; and focus on dividends. 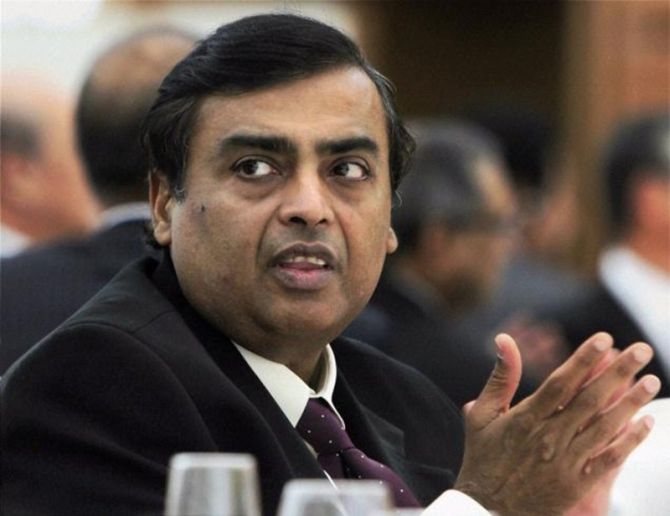 Reliance Industries selling a stake in its oil and chemicals business and a date being announced for the commercial launch of Jio’s fixed-line broadband services, received a positive response from brokerages who felt the move would make the firm debt-free but lower its consolidated earnings.

While seven brokerages, including Morgan Stanley and Macquarie, upgraded RIL, there was no downgrade from any of the 29 brokerages.

As many as eight brokerages raised target price of RIL shares.

On the announcement made by Reliance Industries chairman Mukesh Ambani to sell a fifth of the firm’s oil and chemical assets to Saudi Aramco and nearly half of fuel retail operations to BP, Morgan Stanley said that over the past three months, the firm has under-performed the Sensex by about 11 percentage points on weakness in refining margins and decline in key chemical spreads.

Reliance on Monday announced energy asset sales worth around $ 16 billion; end of the investment cycle in telecom; bringing net-debt to zero in 18 months; value-unlocking options for real estate and financial assets; listing of telecom and retail in five years; and focus on dividends.

J P Morgan said Aramco investment is a positive but “the effective push out of the IPO of retail and Jio is negative”.

“The focus on net debt reduction is a positive, though in a global recessionary environment, there is clear downside risk to our refining and Petchem estimates and after the AGM comments we do not see any telecom tariff hikes in the near term and hence there is downside risk to our overall estimates,” it said.

Reliance plans to sell a 20 per cent stake in the oil and chemicals business at an enterprise value of $ 75 billion, while sourcing 500,000 barrels per day of oil from Saudi Aramco.

The transaction, at an initial-stage for now, will be subject to due diligence, definitive agreements, regulatory and other statutory approvals.

Credit Suisse said the Enterprise Value of $ 75 billion for O2C is higher than its valuation of $ 61 billion.

“Once completed, we estimate the stake sale will make RIL’s energy business nearly debt-free, but it will lower RIL’s FY21 consolidated earnings by 9 per cent and operating cash flow by 14 per cent,” Morgan Stanley said.

Edelweiss said the sale to Aramco is the fourth divestment announced by the company this year.

“We note that during a similar divestment/split spree in 2006, the share price had jumped 38 per cent.”

Bernstein said while the deal provides Aramco direct access to the fastest-growing refined oil product market over the next 20 years, for Reliance it provides cash to fund the expansion of its digital business and further expansion of downstream capacity with an experienced partner.

Also, monetisation of energy assets (fuel retail to BP, oil and chemicals to Saudi Aramco), coupled with the announcement of an end to investment cycle in telecom, would help in deleveraging the balance sheet after nearly seven years.

Jefferies said headline from the AGM was the target to cut Rs 1.57 lakh crore net debt to zero by March 2021 implicitly acknowledges investor concerns on its balance sheet.

RIL’s prior AGMs have primarily focused instead on growth projects and capital outlays.

IIFL said key triggers to watch include induction of investor in fibre InviT, details on the Aramco transaction, and visible reduction in net debt. The collapse in commodity spreads is a key risk.

CLSA said the definitive announcements should dispel worries about leverage.

“At the same time, the company has laid out clear plans for its next leap in growth, with its sight on 500 million mobile subscribers, continued work on online retailing, aggressive ramping-up in fiber and innovative content and technology strategies.”

Nomura said the complete structure of the transaction is not finalised yet but Aramco will not be given any shares of RIL’s stand-alone entity.

“Rather, Aramco will be given 20 per cent economic interest of the O2C division, and this stake may be in the form of non-voting or preference shares.”

“At this stage, there is no plan to separately de-merge the O2C division to avoid cash-flow isolation in the subsidiary structure.

“The agreement will provide for a potential demerger into a subsidiary structure at a later stage,” it said.

The transaction will also provide Reliance with access to technology for its chemical business.

While UBS said the AGM announcements indicate RIL is on course for capex discipline and right-sizing of the balance sheet, Bank of America Merrill Lynch said RIL would issue securities to Aramco without voting rights – implying no equity dilution.

As a result of the deal, RIL would have access to 80 per cent of the O2C cash flows (remaining 20 per cent goes to Aramco).

Kotak Institutional Equities Research said RIL may be required to create a carve-out or special purpose structure, instead of a subsidiary, for the oil-to-chemical (O2C) business under the standalone entity for its proposed transaction with Saudi Aramco to ensure fungibility of cash flows and prevent leakage of taxes.

RIL may receive 50 per cent payment at the time of closure of the proposed transaction and 25 per cent each in two tranches over the next two years.