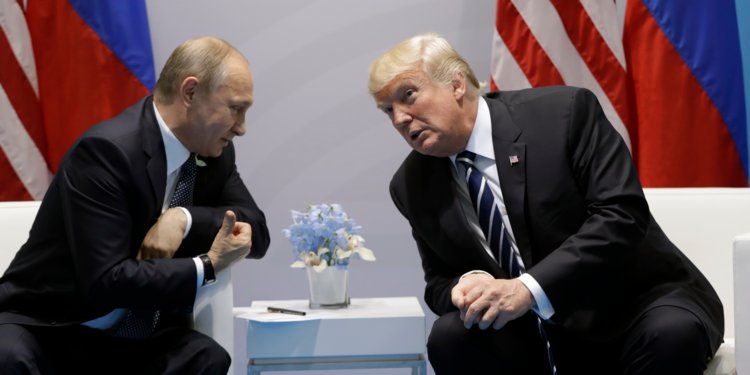 
In the months leading up to the summit between Russian President Vladimir Putin and President Donald Trump in Finland, Moscow appears to have ramped up activity in its Baltic exclave of Kaliningrad.

Satellite imagery gathered by Planet Labs and reported by Defense One shows activity around bunkers in Baltiysk, a town that hosts a major Russian port and two air bases.

Between March and June this year, “the visible change … appears to be the fortification of buildings, characteristic of explosive storage bunkers, utilizing earthen berms to further insulate these structures,” Matt Hall, a senior geospatial analyst at 3Gimbals, told Defense One.


Hall said other structures shown in the images appeared to have been reinforced over that period. Activity in a forested area was partially obscured by foliage, but there appeared to be more structures among the trees, some covered and some uncovered with different levels of fortification.

“In this area some of the structures have changed, potentially showing roofing structures or tarps that have since been removed to reveal caches of items,” Hall said. “Additionally, there appear to be new or redistributed items — potentially identifiable as shipping containers.” Hall also told Defense One a railroad line was visible in the photos.

Kaliningrad — 86 square miles of land bordered by Poland and Lithuania — was an important asset to the Soviet Union, and military activity there has grown amid Russia’s recent military buildup. It also hosts Russia’s Baltic Fleet and its 11th Army Corps.

Russian weapons in Kaliningrad have been a point of contention with NATO. In late 2016, Lithuanian President Dalia Grybauskaite said the transfer of nuclear-capable Iskander missiles to the exclave “means an aggressive, open demonstration of power and aggression against not the Baltic states but against European capitals.” 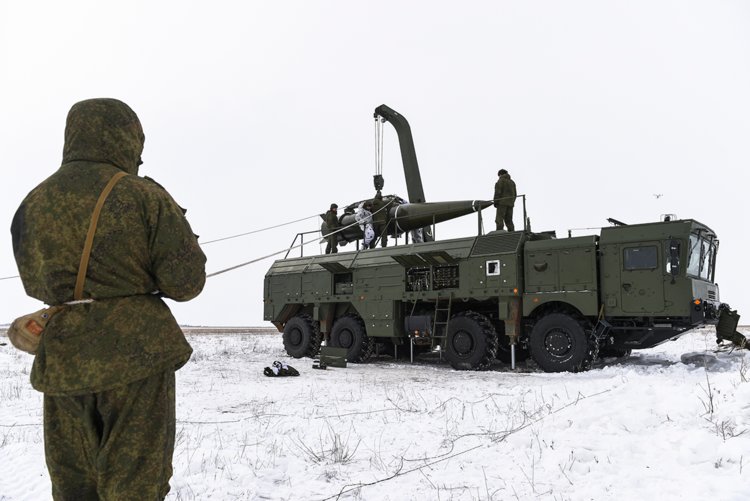 
Iskander missiles have a range of about 310 miles and in the past were stationed in Kaliningrad on a temporary basis. But in February, Grybauskaite said Russia had deployed more of the missiles there “for permanent presence.”

The head of Russian parliament’s defense committee confirmed that deployment, saying it was a response to NATO’s buildup in Eastern Europe. A Kremlin spokesman said at the time that Russia had the “sovereign right” to station military forces on its territory.

Satellite imagery of another area within Kaliningrad showed renovations of what appeared to be an active nuclear weapons storage site, according to a June report by the Federation of American Scientists.

Images “show one of three underground bunkers near Kulikovo being excavated in 2016, apparently renovated, and getting covered up again in 2018 presumably to return operational status soon,” the report said.

The imagery provided few conclusive details, but “features of the site suggest it could potentially serve Russian Air Force or Navy dual-capable forces,” the report said. “But it could also be a joint site, potentially servicing nuclear warheads for both Air Force, Navy, Army, air-defense, and coastal defense forces in the region.”

A dispute ‘could escalate with alarming speed’ 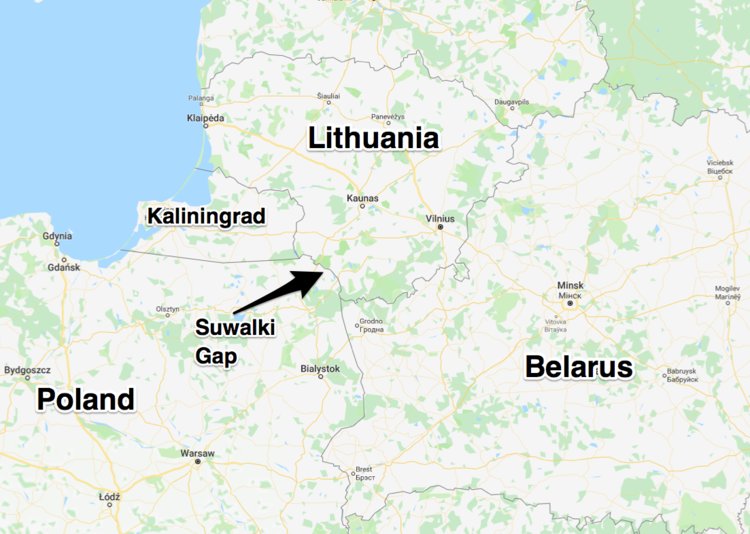 The Suwalki Gap is a 64-mile stretch of the Poland-Lithuania border located between Russia’s Kaliningrad territory and Belarus.
Google Maps


The missiles deployed to Kaliningrad have raised concern about threats to Western Europe, but the exclave also positions Russian forces near the Suwalki Gap, a weak point in the NATO alliance, according to a recent report from the Center for European Analysis, coauthored by retired Lt. Gen. Ben Hodges, who was head of US Army Europe.

The gap, stretching between eastern Kaliningrad and western Belarus, is the only land connection between NATO and its three Baltic member states: Lithuania, Latvia, and Estonia.

“The Suwałki Corridor is where the many weaknesses in NATO’s strategy and force posture converge,” the report says.

“If Russia attempted to establish control over the Suwałki region, or even threatened the free movement of NATO personnel and equipment from within the borders of Kaliningrad and Belarus, it could cut the Baltic states off from the rest of the Alliance” and hinder reinforcement efforts.

A dispute over the gap “could escalate with alarming speed,” the report says, though Hodges believes a Cold War-style Russian ground invasion is unlikely.

“I don’t think that Russia intends to invade Europe as though its 1991. They don’t have the capacity to do that anymore,” he told Defense One.

Moscow may instead look to use a crisis in the area to undermine NATO by showing it was unable to response effectively, or at all, to a threat.

“If you accept that premise, that they might do a limited attack to demonstrate that NATO cannot protect its members,” he told Defense One. “That would create a problem.”

Russia is believed to have a substantial military force stationed along NATO’s eastern border, and its ability to deploy it quickly could make it harder for Western forces to distinguish between a military exercise and an actual military operation.

During the Zapad war games in 2013 and 2017, Russian troops simulated advances on the gap, cutting off the Baltic states from the rest of Europe. There has also been an increase in close encounters between NATO and Russian aircraft in the skies over the Baltics. 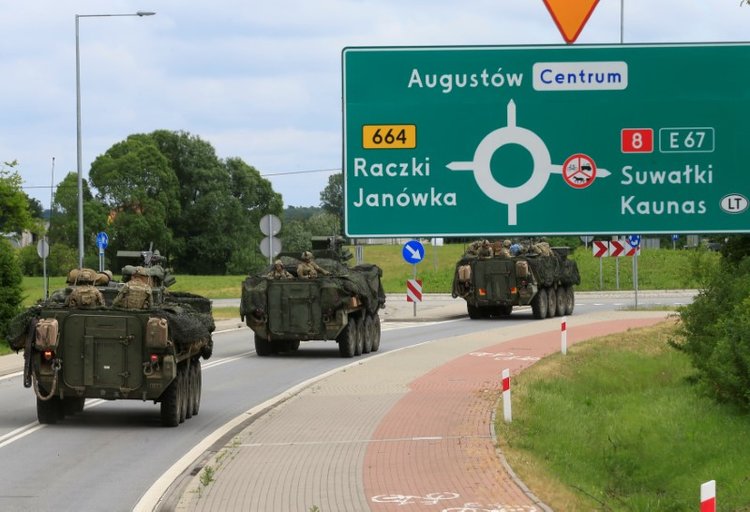 A US convoy near Augustow, Poland, while en route to Suwalki, June 17, 2017.
Thomson Reuters


In the years since Russia’s incursion in Ukraine, Baltic countries have warned about possible aggression against them.

In 2017, Lithuania said it worried Russia was laying the groundwork for “kinetic operations” through propaganda and misinformation — a manner similar to what preceded Russia’s annexation of Crimea.

Lithuania, which is under pressure from Moscow to allow a permanent Russian-controlled transit corridor to Kaliningrad, has also called for a permanent US troop presence on its soil and started building a fence along its border with Kaliningrad.

The CEPA report lays out several scenarios through which Russia could provoke a crisis to justify action against Suwalki, using disinformation and hybrid-warfare techniques to deflect blame and confuse observers.

“If [Russian forces] ever tried anything, they would do it asymmetrically so that they could achieve whatever they wanted to achieve before the alliance caught on,” Hodges told Defense One.

Biden will wait for recommendation on sharing secrets with Trump