(CNN)The swift rise in food prices has led Kay O’Reilly to hang out outside her local Amazon warehouse in Virginia Beach, Virginia, to see if it has any extra eggs, milk, meat or produce to spare.

The visits are part of O’Reilly’s efforts at “food wrangling” to make sure the Chapel Pantry at Eastern Shore Chapel Episcopal Church has enough groceries to provide to its clients.
These days, O’Reilly, the pantry’s director, is seeing more folks in need of assistance — including many first-timers — as soaring inflation eats away at what they can afford at the supermarket. At the same time, federal pandemic relief programs, such as the monthly enhanced child tax credit payments, have ended.
But the pantry is contending with higher costs and supply chain problems, which have made it much harder for O’Reilly to fill the shelves. 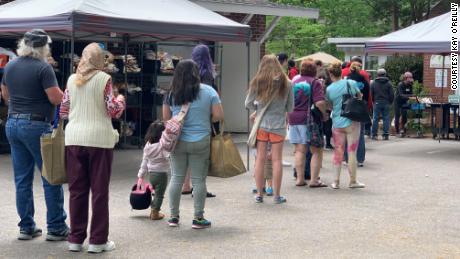 The same is true at food banks and pantries around the country.

About 65% of the 200 food banks in the Feeding America network reported seeing a greater demand for food assistance in March compared with the previous month, with an average increase of 15% more people, according to the latest data from the nation’s largest hunger relief organization. About 30% of food banks said they had served the same number of clients.
The share of food banks experiencing increased demand has more than doubled since December.
Meanwhile, consumer price inflation hit a new 40-year high in March. Rising food and gas prices accounted for much of the hike.
The cost of food eaten at home jumped 10% over the year ending in March, according to the latest federal data. Meat soared 14.8%, while milk increased 13.3%. Eggs rose 11.2%, while fresh fruits became 10.1% more expensive. Rice rose 8.6% and bread cost 7.1% more.
Food banks are buying nearly as much food as they did in 2021 but are paying 40% more for the purchases, according to Feeding America, which has more than 60,000 food pantries, meal programs and partner agencies in its network.
However, the organization is projecting it will suffer a 20% decrease in donations from food manufacturers and a 45% drop in food provided by the federal government in fiscal year 2022, which runs through June.
“We are in danger of running out of food,” said Vince Hall, Feeding America’s chief government relations officer. “We are doing everything we can to avert a major hunger crisis.”

The situation is prompting some food pantries to get creative.
O’Reilly said she will “harass” the Foodbank of Southeastern Virginia and the Eastern Shore, which supplies her pantry, to see when orders are coming in. She’ll text food bank drivers picking up vegetables, bread and other items donated by big-box stores to see if they received more than the pantries on their routes can take. She’ll remind her volunteers picking up donations at area supermarkets to ask if there’s anything left at the back of the freezer. 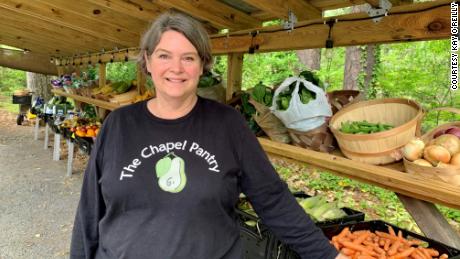 “I spend a lot of my time scrambling to try and have enough food,” said O’Reilly, noting that sometimes the Southeastern Virginia food bank won’t have rice, peanut butter, pasta, soup or dry and canned beans in stock for extended periods.
“Being out of something as basic as rice for three, four weeks at a time is just awful. You’ll have one thing one day, and then it’s gone. And you don’t know when it’s coming back in,” she said.
Escalating prices and reduced supplies are forcing many food banks to restrict how much the pantries they serve can order.
For example, a case of canned corn now costs $26, up from $13 two years ago, said Emma Inman, chief impact officer at the Southeastern Virginia food bank, which works with 168 food pantries, soup kitchens and other feeding programs. This has led the food bank to limit orders to up to 20 cases per pantry, down from 30 cases last year. However, the pantries may not receive the full order at times, if supplies are even more limited and if they don’t put in their requests promptly.
O’Reilly recently checked the food bank’s list and found she could order only five cases of corn, though she needs 12. Also, she can get only four cases of pancake mix, when she could use 20, and five cases of spaghetti, when she wants 15. There are restrictions on other items as well.
While the pantry has a small stockpile of these items that will see it through the next week or two, O’Reilly doesn’t know when she’ll be able to replenish it.
“The supply flow is tenuous and unpredictable, and that’s what causes anxiety when running a food pantry where 300 families a week are counting on us,” she said.
Some food banks find they have skimpier lists of items they can offer their pantries, particularly when it comes to ethnic foods.
Second Harvest Heartland, which serves much of Minnesota and part of western Wisconsin, has a hard time securing white hominy, a central ingredient in Central American, South American and Indigenous communities’ cooking. And it has not been able to order plantain fufu and gari, staples of West African meals. 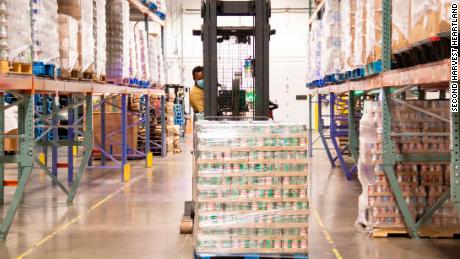 Since manufacturers and retailers are donating less meat and other proteins, the food bank is using grant funds to purchase chicken drumsticks, ground beef, canned tuna, ham steaks, eggs and other items. It has also increased the number of dry and canned bean options it is offering to pantries to maintain the variety of proteins.
Ground turkey, however, is not as readily available, so Second Harvest Heartland may not be able to restock promptly when its current inventory runs out.
As for produce, the food bank usually stocks oranges every week at this time of year, but recently it has been able to get them only on occasion. And it’s harder to find apples and costlier to transport them. But there are potatoes, carrots, tomatoes and melons, among other items, in stock.
“We will have food on shelves,” said Allison O’Toole, Second Harvest Heartland’s CEO. “I want to have food that people know and love on shelves, and a variety of food and a variety of proteins. We’re not able to do that right now.”
Another pressure point: The amount of food Second Harvest Heartland currently receives from the US Department of Agriculture is less than half what it was in 2021.
The Southeastern Virginia food bank is also seeing a decrease in federal supplies. In 2021, the USDA provided elbow pasta macaroni, deli-sliced turkey breast, frozen green beans, cranberry juice and tomato sauce, among other items. Staffers reordered those products a few months ago and expected them to be delivered over the summer. However, the food bank was then notified that the order had been canceled with no reason given. Inman suspects it’s due to a shortage of supplies. 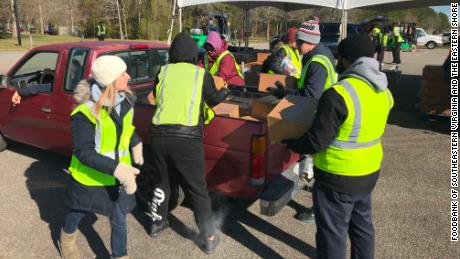 Reduced federal support is one of the reasons the food bank has had to increase its budget for purchasing food to $5 million for this fiscal year, up from $1 million the prior year, she said. It’s able to do so thanks to financial donations from the community, but it likely won’t be able to absorb another big price spike.

Though Congress and the USDA have provided more funds and food to address the national spike in hunger throughout the pandemic, Feeding America says additional help is needed to contend with inflation and supply issues.
RELATED: White House will host first food insecurity conference in 50 years
The organization is asking lawmakers to provide $900 million in additional appropriations to support food banks and to extend the pandemic nutrition waivers that made it easier for children to get meals at school.
It also is urging the USDA to direct existing money to increase the amount of products purchased for food banks.
“There are funds available for investment in the acquisition of agricultural commodities, which can then be given to food banks,” Hall said. “It really is a question of prioritization.”
The USDA said it is investing about $2 billion in the nation’s emergency food system this fiscal year, with the goal of maintaining levels of support similar to those in the previous fiscal year. This includes an estimated $490 million of base allocation from Congress, as well as a $500 million temporary boost and $400 million for states to directly purchase local food for distribution through emergency food providers.
However, the agency acknowledges the funds don’t go as far as they did last year because of inflation.

Bridget Littlefield’s paycheck from her job in a cable company’s customer retention department also isn’t going as far in the supermarket. That’s why the Rosemount, Minnesota, resident now depends more on The Open Door Pantry to feed her two teen daughters, niece and husband, Kevin, 60, who retired early because of medical conditions. She picks up eggs, milk, ground beef and other items there.
Bridget Littlefield, 43, started going to the pantry twice a month, instead of only once, earlier this year. She also now takes her full allotment for her family of five, instead of a smaller amount. And she picks up other things, such as toilet paper and shampoo. 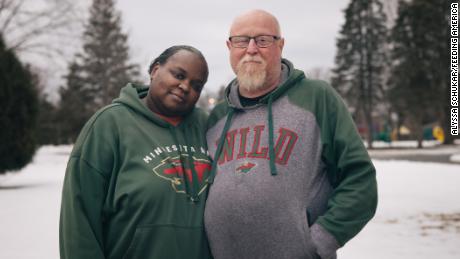 The assistance has helped the Littlefields catch up on heating, electric and other bills, as well as the expenses from the funeral of Kevin’s father last September.

“There are times when I went to the pantry and it helped me so much where I could actually skip going to the store,” Bridget Littlefield said.
Source: Read Full Article