Home » Business » Super Nintendo World Ready To Launch At Universal Studios Hollywood: “This Is Really A Revolution For Us”

In 2016, the theme park that saw the biggest jump in attendance in the world was Universal Studios Hollywood. That year, the park’s attendance surged 13.9% to 8,086,000 visits, according to the EA/AECOM Theme Index and Museum Index. What happened? The Wizarding World of Harry Potter, that’s what.

This year, Universal Studios Hollywood may be on the cusp of launching another mega-draw that’s smartly created from wildly popular IP. With Harry Potter, Universal Creative — the division of the company responsible for theme park experiences — did a great job of building interactivity into the Wizarding World, which is a large part of what sets it apart. This time around, the IP they’re leveraging is one with which visitors are already used to interacting. Universal’s challenge is to do it justice. And, with Nintendo’s help, they may have actually pulled it off.

Universal Parks brass is well aware of the opportunity, and what’s it stake.

“The arrival of Super Nintendo World to Universal Studios Hollywood reinforces our commitment to expand entertainment options beyond traditional movie and television properties and cultivate new, untapped areas that appeal to future generations,”  Tom Mehrmann, President & COO, Pacific Rim, Universal Parks & Resorts told Deadline in a statement. “We are thrilled to welcome Super Nintendo World to our theme park and bring an entirely new level of interactive and immersive experiences to our guests and can’t wait for them experience the land.”

Super Nintendo World at Universal Studios Hollywood officially opens February 14, roughly coinciding with the April 7, 2023 release of Universal and Illumination’s Super Mario Bros movie. A larger Super Nintendo World opened last year at the Japan park with its own Mario Kart attraction and one is also planned for Orlando. Deadline got a preview of the new stateside land several weeks ago. For those familiar with Universal Studios Hollywood, the experience is carved out of the site once occupied by the Phantom of the Opera soundstage.

While a tight fit, the location is a smart choice, because it means the park now has its two anchor attractions on either end: The Wizarding World of Harry Potter up near Universal Plaza, which guests encounter near the entryway, and Super Nintendo World at the far end of the Lower Lot.

Visitors enter the new experience through a shimmering version of the familiar green Warp Pipe. That leads into Princess Peach’s Castle and, through it, into Super Nintendo World. The world is an oversized vision of those in the games: There are giant gold coins, mushrooms, piranha plants, ? blocks, green shells, goombas, power up mushrooms and POW blocks everywhere. It’s all brought to life with sounds and music familiar from the games. 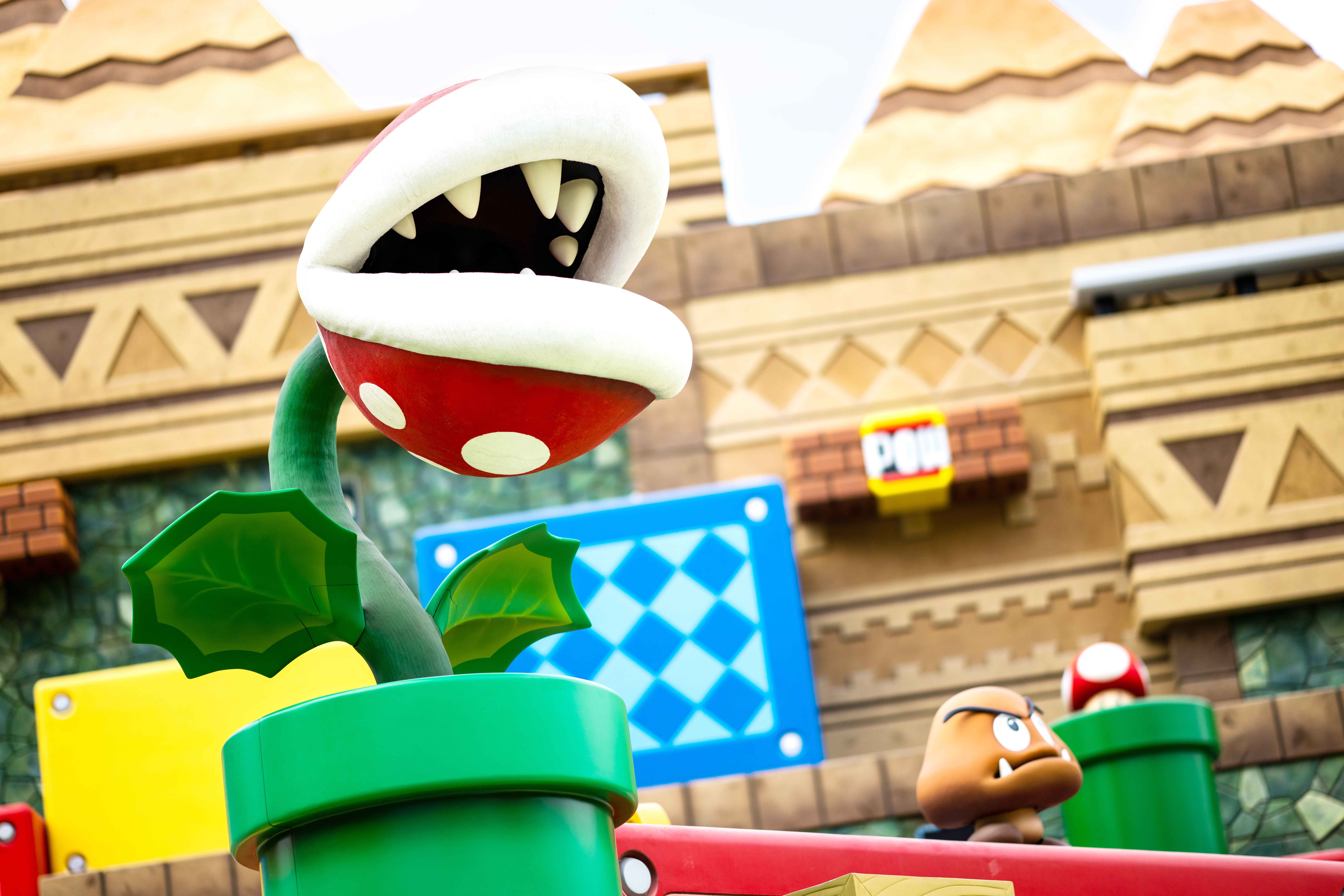 There are also a pair of augmented-reality-enhanced telescopes through which visitors can get an enhanced vision of the land, a gift shop and the Toadstool Cafe as well character meet-and-greets in the courtyard with Mario, Luigi and Princess Peach.

Four challenges are scattered throughout the park which allow players to reclaim a golden mushroom stolen from Princess Peach by Bowser Jr. and earn points.

“It’s not just about keeping score, Universal Creative Vice President John Corfino said, “it’s truly a game.” His team has been involved with the project since it was announced in 2016 (the actual build started about three-and-a-half years ago).

With the completion of each of the challenges mentioned above, a player wins a key. The four interactive Key Challenges involve besting Piranha Plant, Goomba, Koopa Troopa and Thwomp to ultimately gain access to the culminating boss battle with Bowser Jr. That final boss battle sees the player, in silhouette, projected onto an LED screen. The screen exaggerates the player’s jumping ability, allowing her or him to more readily dodge Bob-ombs.

All tasks can be played with or without a $40 Power-Up Band. If visitors do buy one, they can keep track of points earned with each task through the Universal Studios Hollywood app. Points can also, of course, be accrued through hitting POW blocks and on Mario Kart: Bowser’s Revenge. Those points can then be transferred to Nintendo gaming consoles using Amiibo.

While there are elements that lend themselves to discovery, most of the interactivity will be intuitive for those who’ve played the games. For some perspective on how big that market is, the Mario video game franchise is the best-selling of all time. Its revered creator, Shigeru Miyamoto, was involved in every step of the process for Super Nintendo World at Universal Studios Hollywood.

Given limited space at the park, Super Nintendo World is not big. The main courtyard may handle a few hundred people comfortably, with maybe 2-4x that in line for Mario Kart. But the demand will likely far, far exceed those numbers. As a result, Universal has announced that “Reservations may be required to enter Super Nintendo World. Capacity is limited and based on space availability throughout the day.” Smart move. 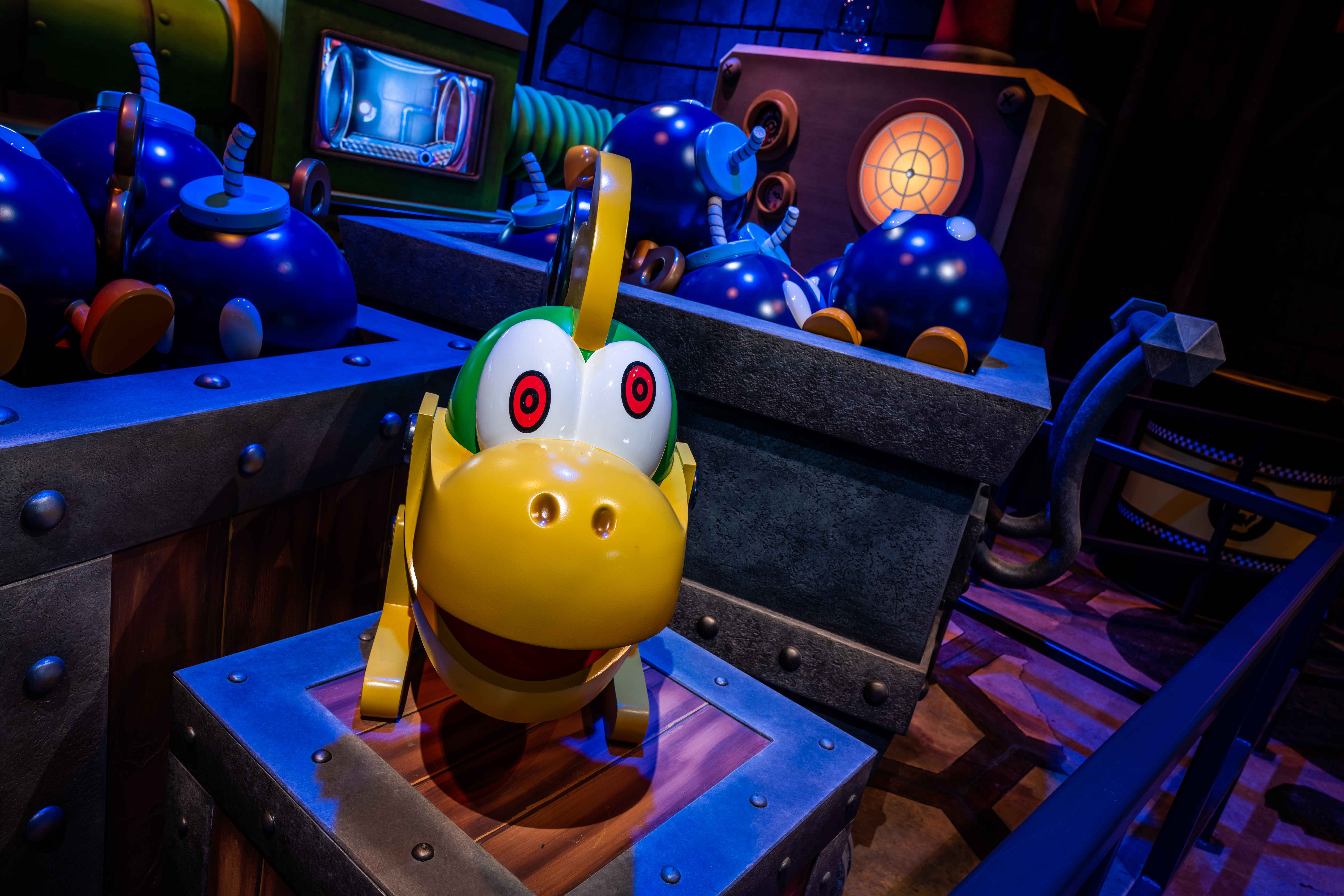 Mario Kart: Bowser’s Revenge is hidden in the bowels of Bowser’s Castle. To get to it, you snake through what must be the longest maze of bannisters in North America. Here, crowding will NOT be a problem, but waiting might, except for the fact that the entire warren is littered with intriguing elements from Mario Kart and related Nintendo properties, such as the Bob-ombs, as well as previews of game play. 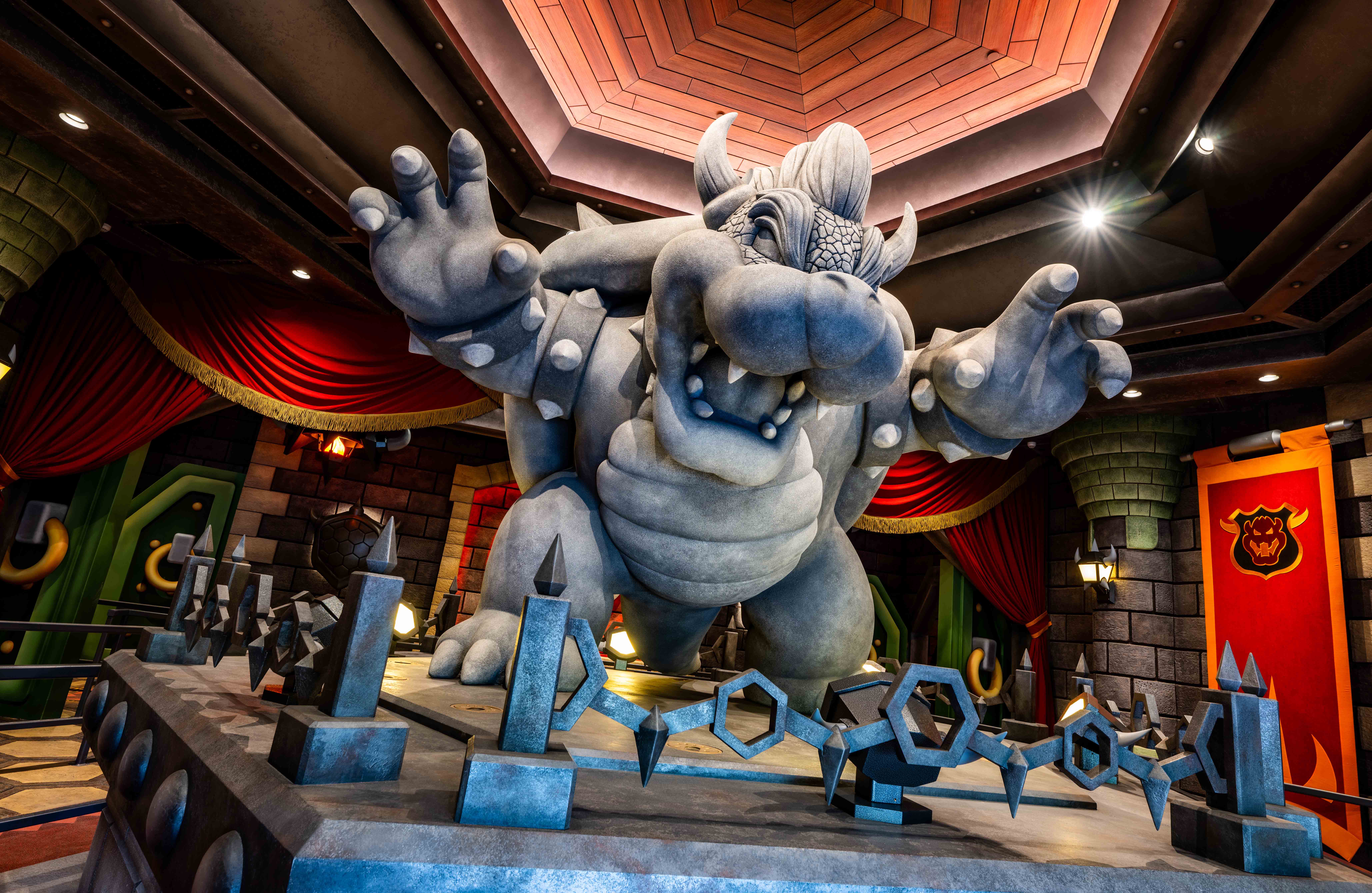 It’s an attraction ready-made for selfies, which may prove one of Super Nintendo World’s most popular features. The line for Mario Kart is populated with photo-ready visual elements like Bowser’s giant statue, the neon-and-pastel-colored walls of Yoshi’s land, books, costumes and an impressive hall of paintings reminiscent of the gallery inside Disneyland’s Haunted House. Of course, guests exit through the gift shop. 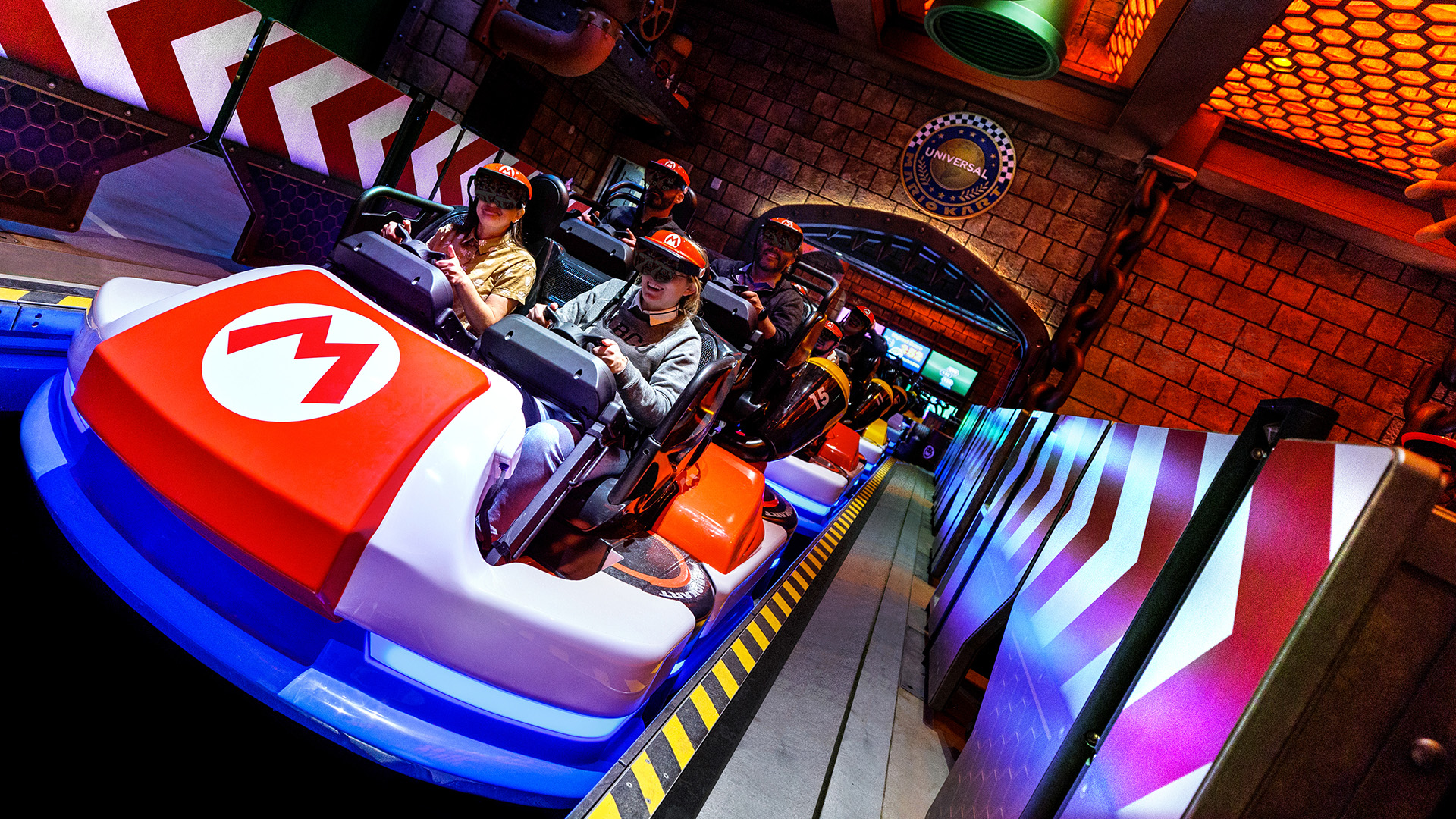 The ride itself employs layered visuals through a fusion of augmented reality, projection mapping technology and actual set pieces powered by data from participants’ Power-Up Bands. Participants are each given a red “Mario” visor onto which special goggles magnetically snap. The attraction sees riders battle Team Bowser on iconic Mario Kart courses alongside Mario, Luigi, and Princess Peach by collecting coins and throwing shells to win the coveted Golden Cup. With a Power-Up Band, Mario Kart: Bowser’s Revenge becomes ever-changing, leveraging data from a participant’s past rides to inform the course of subsequent experiences. Thus, the ride is repeatable and has a variety of potential outcomes depending on how each team plays.

While the term “gamification” is often thrown about in relation to interactive rides, with Mario Kart: Bowser’s Revenge Universal Creative “dimensionalized the game,” said Corfino. The build was about imaginatively bringing to life great interactive elements that have existed for decades in Nintendo’s games and making them compelling in the real world.

“This is really a revolution for us,” he said.

Actor Out Of Surgery, Still Critical But Stable In Intensive Care 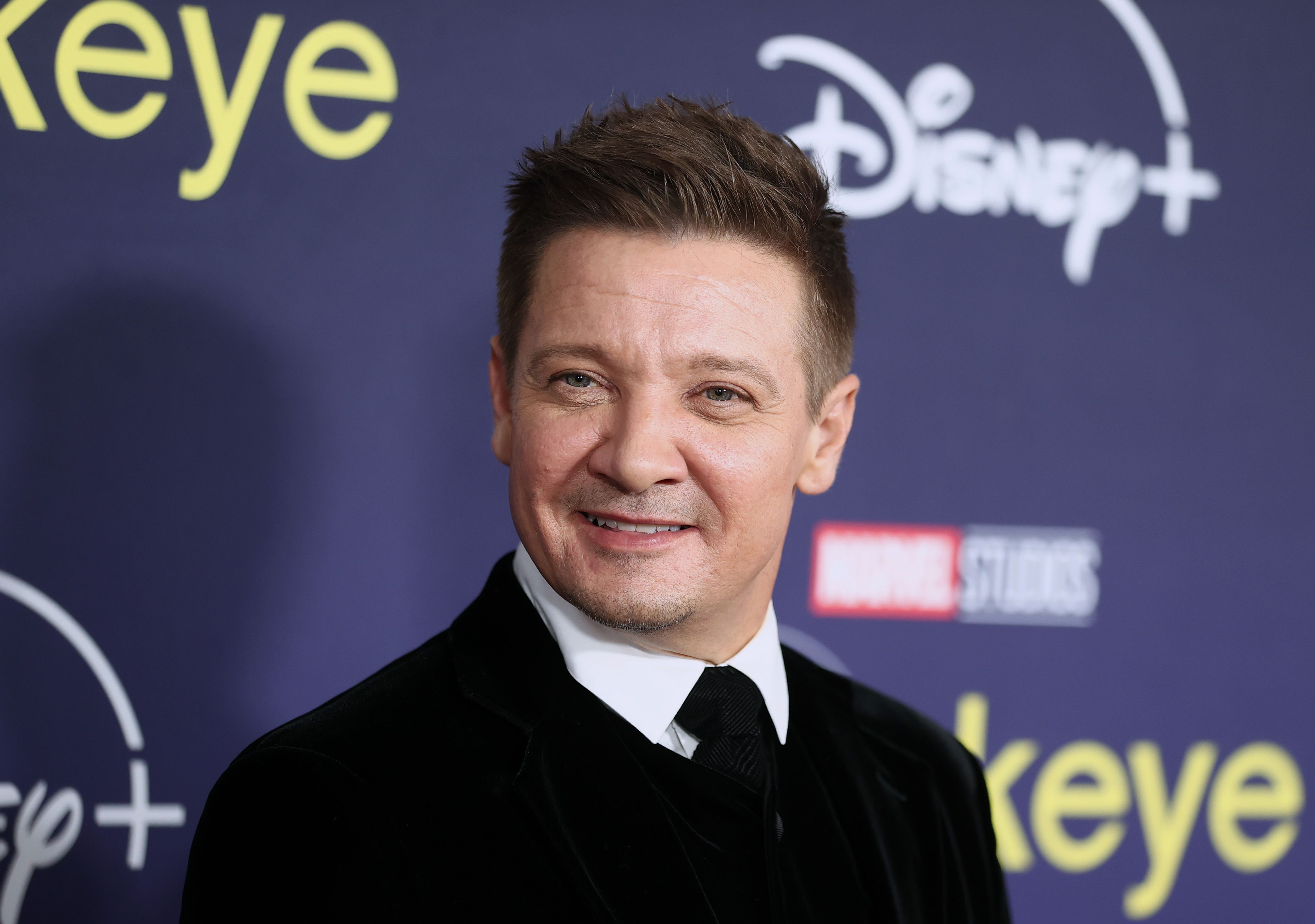 Bills Player In “Critical Condition” After Getting CPR On Field; ‘MNF’ Postponed 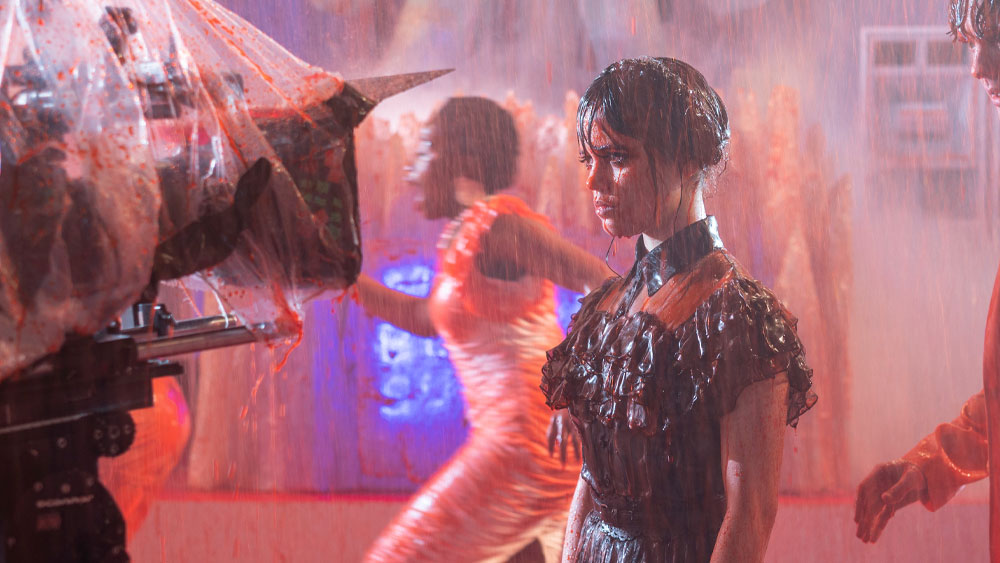